"Father Rich" Brings Catholics Back to the Fold 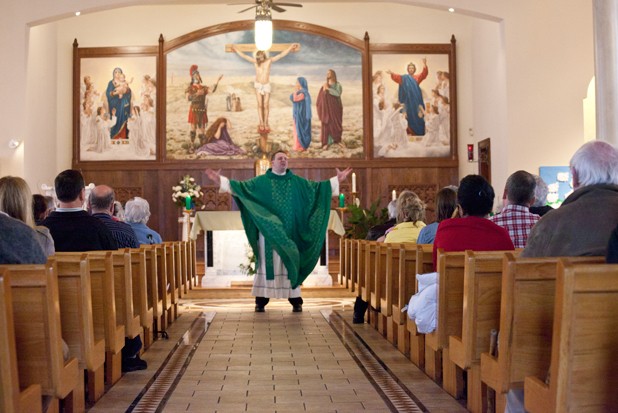 On January 13, Earl Handy was having such a bad day that he thought about hitting the bottle. He’d spilled five gallons of fryolator oil on the floor of his Burlington restaurant, Handy’s Lunch, then had a car accident on his way to pick up cat litter. Looking for a lifeline, Handy, 39, reached out to his priest at Christ the King Church.

It wasn’t booze that tempted Handy. Father Richard O’Donnell had handed out bottles of holy water to parishioners several weeks earlier, Handy recalls, “so I sent Father Rich a message saying, ‘I still have the holy water. How much of it can I drink?’” O’Donnell texted back his assurance that Handy’s day hadn’t been that bad. When Handy still insisted he needed a sip of the blessed beverage, the pastor recommended he instead sprinkle the water around him and say a prayer, after which everything would work out.

For Handy, that seemed to do the trick. “I’ve never had that connection!” he now marvels. “Maybe it’s just the 21st century, where you can send your priest a text when you’re having a tough one — but [O’Donnell] responds, and he’s a busy man.”

Handy isn’t the only Catholic who’s taken a shine to Burlington’s new reverend. Among O’Donnell’s fans, the restaurateur says, are Handy’s 5-year-old twins, who now enjoy going to mass every Sunday, in part because the church recently started providing crayons and gospel-themed “kids’ bulletins” for them to color.

More adults are getting involved at Christ the King, too, and in the process are bucking a decades-long trend. Although Catholicism remains the Green Mountain State’s majority religion, from 2000 to 2010 the number of practicing Catholics in Vermont dropped by 20,000 people — 13 percent — according to a report from the Association of Religion Data Archives. Between 1980 and 2000, 8,300 Catholic Vermonters stopped attending church.

O’Donnell, 36, was installed at Christ the King Church and School (which shares a parish with St. Anthony’s Church) just last July. Since then, 56 families have joined his church. The number of parishioners who volunteer at mass has tripled, and this coming Easter, 15 people — young and old alike — are slated for baptism.

Does the rock-star aura of Pope Francis deserve credit for those numbers? “That was my first thought,” says the Very Rev. Michael Cronogue, an Edmundite priest at Saint Michael’s College. “But I think it’s more Father Rich’s personality and his willingness to come and work. Not that the people before [him] didn’t work, but he’s a very engaging and dynamic guy.”

Indeed, for all the media attention around Pope Francis, his progressive statements have yet to lure a critical mass of Americans across the religious aisle. A November study by the Pew Research Center found that the portion of Americans identifying as Catholic had remained steady at 22 percent since last spring.

At Christ the King, however, “the church is full. There’s more families and younger people,” says Handy, a lifelong parishioner. “I think it’s a Father Rich thing.”

On the evening of January 5, the Sunday before Epiphany, a couple hundred people attended O’Donnell’s mass, including several children. Epiphany marks the arrival of the Magi in Jerusalem, so O’Donnell had placed actual pieces of gold, frankincense and myrrh in front of the altar. “If you touch the gold,” he said drolly at the beginning of his sermon, “you’ll burn forever.” The audience laughed.

The pastor went on, wondering aloud what gifts the churchgoers would have brought to the Christ child’s manger. “The KitchenAid mixer you have on your counter? Would you simply get a card and write a check? Would you find a family heirloom and wrap that up?” Soon O’Donnell got to the meat of his sermon, a recommendation that all churchgoers give their hearts to the Lord. Stirring words, certainly, but fire and brimstone this sermon was not.

“I guess that’s my personality,” O’Donnell says about his jokes in an interview several weeks later. “The mass is very sacred, but I always try to make my sermons applicable to daily living. I think we’re all just trying to get through the week … I don’t expect perfection, and I want us all to try our best and be happy.”

Born in the Boston area and raised in Bellows Falls, O’Donnell says he decided to enter the priesthood early. He took inspiration from the positive example of pastors he knew growing up, “great men [who] weren’t grumpy about their work.” O’Donnell’s father worked for the town of Brattleboro; his mother was a nurse’s aid.

After attending Boston College, O’Donnell did his seminary studies at Mount St. Mary’s University in Maryland. His early clerical duties included turns as chaplain of the Mount St. Mary’s baseball team, assistant priest in St. Johnsbury and administrator at an Enosburg Falls church. In June 2009, the Most Rev. Salvatore Matano, who had just been ordained bishop of the Roman Catholic Diocese of Burlington, assigned O’Donnell to become priest at Saint Michael Roman Catholic Church and School in Brattleboro.

When O’Donnell arrived there, he says, attendance had declined at mass, and the school was on the verge of closing. He handled those challenges, attracting “inactive Catholics” back to the parish and leaving the school with its debts repaid. But when Tropical Storm Irene wreaked havoc on Windham County in 2011, O’Donnell recalls, his administrative talents were taxed to the limit.

As chaplain of the Brattleboro fire and police departments, O’Donnell was with the first responders during the storm. Only after the waters receded could they start delivering aid to nearby towns such as Newfane, O’Donnell says, “but there was a lot of work, a lot of devastation, and a lot of it was just listening. I remember going to people’s homes that had lost almost everything, and you would just listen.”

Timothy O’Connor Jr., a St. Michael parishioner and former speaker of the Vermont House of Representatives, recalls O’Donnell speaking at a vigil after the storm. “He had a great way of understanding ... that there were issues that had to be dealt with,” O’Connor says. “He was trying to drum up the people to make contributions and do things and help get the community back together.”

Because of those people skills, O’Connor adds, “I used to kid him; I used to tell him, ‘I think you would have made a hell of a politician.’”

Now in Burlington, O’Donnell is a politician of sorts. He’s starting a variety of ministries “to get as many people involved in their faith as possible,” he says. One of them enlists parishioners to give roses to people with disabilities on Valentine’s Day. While his church is in Burlington’s comfortable South End, O’Donnell says he’s trying to draw his parishioners’ attention to the needs of people elsewhere in the city. He himself serves some of those needs as chaplain for the Burlington Fire Department.

Finally, O’Donnell is social-media savvy. On Facebook, he announces upcoming masses to his 2000-some friends, describes himself as being “in a complicated relationship” and updates his status with varying degrees of seriousness. On March 13 of last year, for example, came this update: “Bells are ringing in Brattleboro. We have a pope.” A week earlier, he’d shared a meme: “Pubs: The Official Sunblock of Ireland.”

“That’s one of the reasons he connects so well. He’s got a unique sense of humor,” says Matt Vinci, former president of the Professional Firefighters of Vermont. He appointed O’Donnell as that organization’s official chaplain after meeting him in Brattleboro. “Get him in a firehouse and he’s a natural,” adds Vinci.

It’s easy to draw comparisons between Christ the King’s young, iPhone-equipped pastor and Pope Francis. The latter has made waves not just by opening a Twitter account and posing for selfies with members of his flock, but also by denouncing conservatives for their narrow focus on social issues such as gay marriage, when poverty looms so large around the world.

O’Donnell says he doesn’t believe what Pope Francis is saying about poverty is new; rather, it’s “how’s he saying it.” How would he react if a same-sex couple wanted to join Christ the King? O’Donnell says, “We never would turn anybody away. The gospel obviously calls us to love, and to love everybody, and our present pope is calling us to really speak with that action and speak with that love.”

Asked about the sexual abuse cases that have racked the Catholic Church here and abroad, O’Donnell points to policies now in place to ensure such acts don’t recur. “As a whole, yeah, the church really needs to respond with a renewed sense of hope that we’re going to be vigilant and make sure … those horrific moments will never happen again,” he says. “Here we have a school where we want to make sure that all children are protected.”

As Catholic schools around the country face declining enrollments, the challenges are twofold for priests at churches with schools, points out Cronogue, the pastor at St. Michael’s. Angela Pohlen, Christ the King’s new principal, suggests that O’Donnell is up to the task of fostering the church’s educational mission, saying she appreciates the new priest for not being “a micromanager.”

“It was a great sense of reassurance to step into the position and find right away that we were on the same page,” Pohlen says. “He’s up on popular culture … He brings a joyful air with him, and that’s so, so important. Kids are joyful, and you need to meet them where they’re at.”

O’Donnell is also meeting adults where they are. Last summer, Handy — whose twins attend Christ the King school — wasn’t able to attend mass one Sunday. He sent the priest a message: “Sorry, Padre, I didn’t make it to mass today. It wasn’t a good day.”

In response, O’Donnell asked Handy, “Do you think Jesus told the Romans that ‘Friday wasn’t a good day. I can’t make it’?” At first, Handy says, “I was like, Come on! You’re going to play that card? But I haven’t missed a day of church since,” he continues. “He’s so young and fresh that it’s not like he’s calling you out.”