Fast, Cheap and Good? A Closer Look at the Vermont Yankee Deal 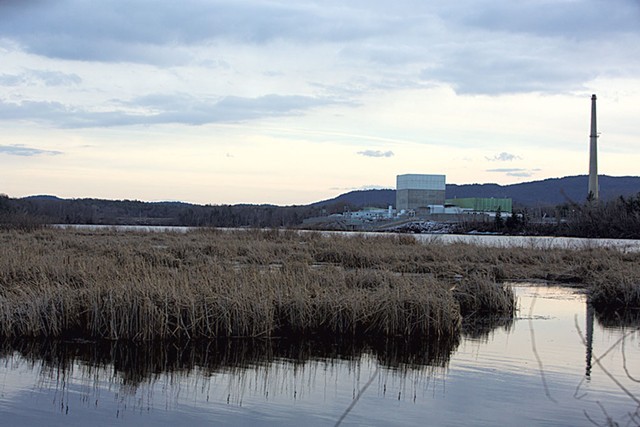 The announcement came on Election Day 2016, an ideal moment to bury some bad news. But this news was so good it beggared belief.

NorthStar Group Services, a firm specializing in demolition and reclamation of industrial sites, had offered to buy the shuttered Vermont Yankee nuclear power plant and conduct a thorough cleanup within 15 years.

By contrast, the plant's owner, Entergy, had projected a timeline as long as 60 years. Not only that, but NorthStar claimed it could do the job for less than half of Entergy's estimated cost.

"When things sound too good to be true, they usually are," remarks Vermont Attorney General T.J. Donovan, who has filed to intervene in both the state and federal reviews of the proposed sale.

Well, there is that. Anything else?

"NorthStar is new to this," says Neil Sheehan, spokesman for the federal Nuclear Regulatory Commission. "They have decommissioned research reactors, and they've done many other nonnuclear projects, but this is the first time they've done a commercial nuclear power plant."

"NorthStar's business is large-scale demolition and decommissioning," State claimed. "We have the employees, the equipment and the expertise to do this work."

Entergy, he added, is not in the decommissioning business, so NorthStar actually has more experience. It knows how to do a big job on time and on budget. Plus, it would hire subcontractors with deep experience in nuclear decommissioning to perform the relevant tasks.

So why does NorthStar want to step into this new line of work, which seems fraught with risk? Because there's gold in them thar nukes.

"This is a new deal. This is an experiment," says Chris Williams, Vermont organizer for the Citizens Awareness Network, a nuclear industry watchdog. He notes that there are dozens of aging nuclear plants in the U.S. — a huge potential market for NorthStar's services, which the company believes it can exploit profitably. "We have to watch this because what happens here may be replicated across the country," Williams adds.

This is also a new deal for the NRC itself. Vermont Yankee is one of the first so-called "merchant plants" to shut down. Merchant plants sell their power into the grid, not to a specific customer base. If a utility-owned plant decommissioning goes over budget, ratepayers are forced to foot the bill. That option doesn't exist for merchant plants.

There's a saying in the business world: "Fast, cheap or good: You can only pick two." The NorthStar plan appears to promise all three. But how?

According to NorthStar, the job won't be done faster — just sooner. Instead of delaying the work until Vermont Yankee's decommissioning trust fund accumulates enough money to pay for the job at Entergy's projected price tag of $1.24 billion, NorthStar will work within the fund's current balance of $538 million and finish as soon as 2026.

NorthStar has laid out a decommissioning plan consisting of hundreds of discrete tasks, each with its own cost estimate. If a single element goes over budget, the rest of the jobs continue unimpeded. It's an impressive, if entirely hypothetical, display of NorthStar's expertise. However...

"We haven't been able to see what their cost breakdown is," says Kate O'Connor, who chairs both NDCAP and the Brattleboro Selectboard. "That's one of the documents they want to keep confidential. We're supposed to believe them, which is a difficult prospect for the public."

The deal must be approved by the NRC, which oversees license transfers and the radiological aspects of the plan. The Vermont Public Utility Commission — until last week known as the Public Service Board — has review authority as well. The PUC must decide that the deal is a net positive for the state.

Entergy and NorthStar have asked the NRC for a decision by the end of this year, but the commission has made no commitments. "This application has some unique elements to it," says Sheehan. "The staff will take the time it needs to be as thorough and diligent as possible."

Congressman Peter Welch (D-Vt.) is keeping a close eye on the process.

"We have been urging the NRC to make sure that the state and the Brattleboro community have a seat at the table," he says. Welch's other two priorities: proper use of VY's decommissioning trust fund and "what we've heard from the community, which is that they want the decommissioning to occur sooner rather than later."

It's true that many in southeast Vermont — and particularly in the town of Vernon, which hosts Vermont Yankee — are eager to put the plant firmly in the rear view and make productive use of the plant's location.

But they don't want to get stuck holding the bag, especially if it's radioactive. The central question: Can NorthStar make the finances work? What if there are cost overruns or unexpected problems?

The company offers not one but three financial backstops.

First, each of the hundreds of discrete tasks has a 10 percent margin of error. If a task is on budget, that 10 percent is NorthStar's profit. If a task requires more money, it's available. Also, each of the tasks is budgetarily walled off from the rest.

Second, NorthStar would provide "performance bonds (or insurance, where appropriate) ... to guarantee the performance of the tasks," CEO State wrote in his prepared testimony to NDCAP.

And third, NorthStar would set aside $125 million in reserve for unforeseen expenses.

That's all fine, but some are unconvinced.

"We asked the NRC, 'What if the trust fund runs out and NorthStar's $125 million runs out?" O'Connor recalls. "The response was, 'We expect the licensee to figure out where the money's going to come from.' It's the circular answer we get every time."

NorthStar does have an impressive-sounding plan. But the nightmare scenario is out there, and for those who have lived through iffy maintenance, corporate gamesmanship, tritium leaks and a cooling tower collapse, nightmares seem distressingly plausible.

The NRC's Sheehan confirms that the ultimate financial responsibility is the licensee's and says that, if necessary, the commission would "work with the Department of Justice to make sure that the funding is there."

But wait. NorthStar is buying an entity known as Entergy Nuclear Vermont Yankee, a limited liability corporation whose only assets are a dead nuke and the trust fund. NorthStar will retain that structure, which is designed to limit the parent company's legal exposure.

Here's another concern from Peter Walke, deputy secretary of the state Agency of Natural Resources and a member of NDCAP. His agency oversees the non-radiological aspects of the cleanup. He says Entergy doesn't have an up-to-date site assessment, which means the company doesn't know for sure what might be lingering on the site.

That may seem like small potatoes at a nuclear plant, but Walke says, "We've seen in other decommissionings around the country that non-radiological cleanup can cost a lot more money than expected."

Walke continues, "We're still not completely satisfied that we have answers."

He's not alone. Without exception, the Vermonters interviewed for this column are honestly hopeful that the NorthStar plan will work — and they're not completely satisfied with its explanations.

But let's look at it the other way. Entergy's track record is what it is. Its cleanup plan would take decades and assumes years and years of stock market growth. NorthStar hasn't provided complete reassurance — but in the end, what's the option? Sticking with Entergy?

If NorthStar can give some better answers and flesh out the details, it's going to be very difficult for state or federal regulators to say no to this plan.

A Scandal for Sanders

On June 29, Our Revolution, the political organization that grew out of Sen. Bernie Sanders' (I-Vt.) presidential campaign, announced that Jeff Weaver was out as head of the group. He was replaced by Nina Turner, a former Ohio state senator and close political ally of Sanders.

The announcement gave no reason for the sudden departure of Weaver, who got his start as Sanders' 1986 gubernatorial campaign driver — and rose to presidential campaign manager 30 years later.

An explanation of sorts arrived the following day, in the inbox of Seven Days political editor Paul Heintz. In response to the national furor over Jane O'Meara Sanders' tenure as president of Burlington College and the FBI probe of same, Heintz had emailed Sanders' Senate press office seeking an interview with the senator.

Spokesman Daniel McLean's reply: "Paul – Jeff Weaver is your best contact on this. Thanks, Dan"

According to Weaver, the two events are not connected. But he does seem to have taken on the role of Sanders family fixer.

That's a sign that our junior senator is taking this matter very seriously indeed.

It's been fascinating to watch this phenomenon from our provincial viewpoint. Nearly seven years after the events in question and two full years after local media began investigating O'Meara Sanders' fundraising practices at Burlington College, the story first caught fire in the national political media only two weeks ago.

The spark that touched off the blaze was a June 22 article in Politico Magazine entitled "Jane Sanders Lawyers Up." The story broke little, if any, new ground. But because Politico is a staple of the Beltway news diet, the Washington, D.C., media finally took notice. Now, every time Sanders is interviewed on television, he faces questions about the FBI probe and his own alleged involvement. (See related story, page 20.)

Plus, the media echo chamber being what it is — and Sanders being irresistible clickbait — Vermont media outlets have been running stories based entirely on Sanders' comments on national TV. No actual news; just "Bernie said something on CNN."

Here's one more oddity about the national media's sudden Jane-mania. Remember the Hillary Clinton opposition research file on Sanders? The one made public by Wikileaks?

The story was out there. The national media never noticed. Or if they did, they chose not to do anything about it.

If Sanders had actually won the Democratic nomination, would things have been different? Would the Republicans have seized on the affair, prompting the Beltway press corps to take notice? I think you know the answer.

Would the publicity have hampered his campaign? Almost certainly.

The proof can be seen in Weaver's deployment. If Team Sanders is leaning on a trusted longtime associate to spearhead its response, it is paying close attention indeed.