Fashion Revolution in the Upper Valley 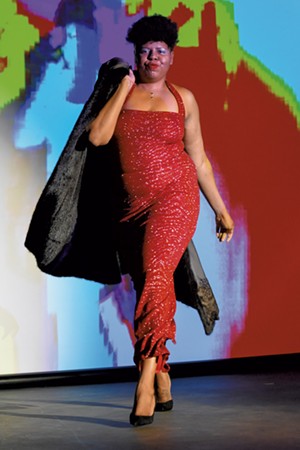 The words "fashion show" might evoke thoughts of glossy lips, doll-like eyes and rail-thin bodies. That standard has been slow to evolve on an international scale — shout-out to the trans and plus-size models making inroads out there. But for the past 15 years, Revolution in White River Junction has been staging fashion shows that fly in the face of convention.

The upcycled clothing shop's annual Tip Top Couture Fashion Extravaganza, happening this Saturday, October 7, includes just about anyone who wants to get onstage. The models are young or old, thin or full-bodied, male- or female-presenting.

The democracy of the lineup is due in part to the hands-off directorial approach. Shop owner Kim Souza emails out a call for models; the first 40 people to respond get to be in the show. They're invited into the shop to pick out their own outfits from the assortment of consignment items and designer pieces the store carries. Usually, Souza says, 20 to 30 percent of the clothing on the runway comes from local, independent designers.

This year, those include Rene frances g, Mark Merrill, and Lou Minatti and Ann R. Key. The last pair produces screen-printed work; Souza notes that one piece is a tuxedo printed with a list of citizens' rights during police encounters.

She says the mix of body types, genders and outfits occurs naturally, but the outcome is not always consistent. "Some years, I feel like we've got all middle-aged white ladies," Souza says in a phone interview. "We don't influence it. We don't even know what the models look like 'til they show up [for fittings].

"Last year," she adds, "we ended up with Sasha Velour."

That name might ring a bell for anyone who tuned in to "RuPaul's Drag Race" on LogoTV last season. Velour (aka Sasha Steinberg), who lives in Brooklyn, won the popular drag competition's ninth season. The former Center for Cartoon Studies student also participated in the Tip Top show in 2011. That was "the first time [she] put on heels," according to Souza.

Who will rock the runway this week? You have to be there to find out. Though the clothing takes center stage, Souza emphasizes that the evening is also a time for locals to kick up their heels. "It's just a really fun night out in the Upper Valley, where there's not a ton of nightlife," she says. "People have a little nightclub party after the runway show — it's a super warm and fuzzy thing."

Also a feel-good thing: Every year Revolution donates a portion of the show's proceeds to a local nonprofit. Souza concedes, "It's not thousands of dollars." So this year, to up the ante, the store is collaborating with local African American-focused theater company JAG Productions to throw a fundraising party for JAG before the fashion show. The ticket price for that event is higher but guarantees a seat by the runway and a glass of Champagne to boot. Cheers.

The original print version of this article was headlined "Fashion Forward"