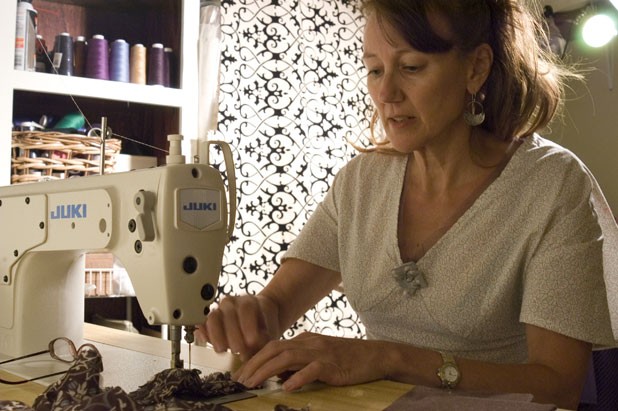 If a home-décor show featuring only Vermont-made products were to make its way to television, Claudia Venon could take charge of two elements: interior design and fashion for the women of the house. Based in Malletts Bay, she provides design consultation to some of the priciest homes in the Burlington area. (She won’t reveal their owners’ names.) Claudia Venon Designs — formerly called Venon Homes and Interiors — has operated for 10 years on word of mouth alone, and the work keeps its proprietor busy five days a week.

On weekends, though, Venon switches to making clothes under the label Me and Louise. The latter’s wrinkled face greets visitors to Venon’s basement apartment with as much enthusiasm as does the fashion designer herself: Louise is a devastatingly cute pug. “I love her too much, I think,” Venon coos, looking down at her companion of six years. She accords the same adoration to her other housemate, Coco the cat. Venon has already decided on the name of her third company-to-be: Coco and Louise, for which she will design and produce a line of limited-edition home products, including bed linens and room dividers.

For now, she’s funneling her abundant creative energy into the “rock star” belts, wrap skirts, midi capes and popular reconstructed T-shirts that bear the Me and Louise label, in a race to keep her Burlington Artist Market racks and Etsy online account stocked. Venon is also busy creating six outfits for Strut — the annual South End Art Hop fashion show — which is less than three weeks away. One of these she calls her “nature dress.”

“I like to think about the origin of things, and most things we have come from nature,” Venon explains. The dress, to be worn by a local tattoo-covered runway model, will be adorned with long, flat tree pods and frothy purple blooms she found in an interior-design client’s yard. “I just want it to be wild!” she enthuses.

A native of Connecticut, where her journalist mother and graphic-designer father moved from New York City to raise a family, Venon earned a liberal arts degree in New Jersey, focusing on photography. That skill launched her on a succession of design-related jobs, from working for a florist to organizing themed events for a catering company. She moved to Burlington 20 years ago when her sister, then employed at Fletcher Allen Health Care, advised her to come, saying it was a “great place for entrepreneurs.” Venon did photo styling for Jager Di Paola Kemp Design and oversaw events at the waterfront restaurant Isabelle’s, among other ventures, before meeting a homeowner who hired her to help redecorate.

In her pre-Vermont life, Venon says, “New York was my town.” She still makes regular trips to the Big Apple for an urban fix, as well as to Montréal and Boston. Her aesthetic suggests the city, too, looking rather cutting-edge on the streets of Burlington: London caps with a hip-hop feel; unique two-tone jeans made from vintage ’70s fabrics; tees printed with woodblocks, which Venon carves from linoleum, and appliquéd with felt cut-outs of birds. Surprisingly, Venon insists that “My biggest struggle is staying creative on a daily basis — waking up and getting myself in that place [where] I say to myself, ‘OK, I’m going to create today.’ Creativity is being disciplined,” she concludes.

Venon is also motivated to create pieces for an upcoming series of home trunk shows; over the winter, she’ll bring Me and Louise products, along with cheese and wine, to local living rooms for group try-ons. (Venon has donated part of her proceeds from these events to Rosie’s Girls — a trades-exploration camp for girls — and plans to benefit animal shelters next.) She’s also designing original wall hangings that combine vintage wallpaper, appliqués and Photoshop techniques.

“I don’t want to get too busy doing any one thing,” the design maven notes. “I’m in the process of rediscovering myself; I want some time to explore. This is a great time.”

Claudia Venon's clothes can be found every Saturday at the Burlington Artist Market, where'll she be until October 11, and at www.meandlouise.com. To arrange a trunk show in your home, call her at 316-0850.