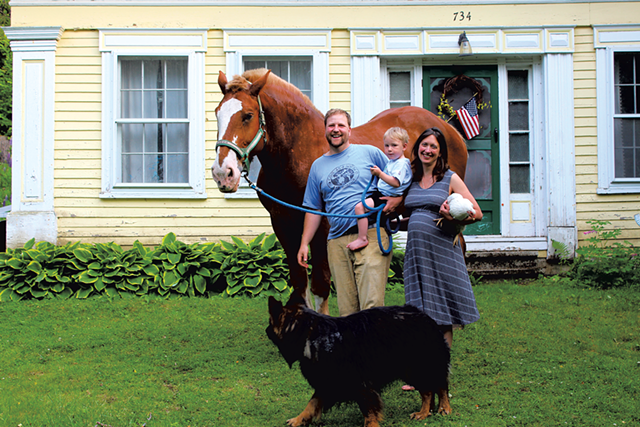 Tom Galinat and Hanna Wheeler Galinat had always aspired to live off their land. But it wasn't until they bought a 200-year-old farmhouse in the small town of Peacham in 2013 that they were able to realize their dream. They now own a Belgian draft horse, chickens and honeybees — all of which help them pay the bills and eat local.

Their horse, Pete, hauls wood from felled trees on the Galinats' 180 acres of rented land and gives wagon rides for special events. Tom also works 20 hours a week as the town clerk and treasurer of Peacham. And in the early morning and after-dinner hours, he helps with chores and milking at Kempton Farms, a local dairy farm.

Hanna works at Peacham Elementary School, which has about 50 students. She used to teach math and science but scaled back this year to a part-time teaching gig in the after-school program focused on gardening, yoga and cooking.

The couple is still trying to decide whether working with animals is going to remain a hobby or expand into a full-fledged business. "We're kind of stuck in the middle," says Hanna. That's because farm animals come with huge expenses like barn repair, electric fencing and water heaters.

For now, Tom and Hanna are holding down the home front by working multiple jobs, parenting their toddler, Josiah, and preparing for a new baby due this summer.

Tom: After Josiah was born, Buck [one of their former horses] was bit by an animal. He had a bad wound, and I had to walk him every four hours so he wouldn't go lame. We found that out the day we got home from the hospital, so in the middle of the night I had to walk the horse and do IVs. And Hanna was waking up every few hours to feed the baby. [That day], we also found out the septic line was broken.

Hanna: I walk in and Tom was like, "If you have to go to the bathroom, go in the woods." And I said, "No, I just gave birth to a child." So Tom got a shovel and fixed it.

Tom: I had to go to Home Depot in Littleton, covered head to toe in human feces. But I didn't care. I was on a mission: My wife had to use the restroom! I was up until midnight shoveling by headlamp.

On the daily schedule:

Tom: I get up around 6:30 or 7, pull together some clothes, drink some cold coffee and head out the door to work [at the dairy farm, then the town office]. During the school year, Hanna teaches in the afternoons while I stay home and watch Josiah. We were able to get away without childcare, which is a huge cost savings. At home, I do a lot of farming tasks while Josiah tags along and helps. After Hanna gets home from work, I go back to the dairy farm at 7 p.m. to do farm chores.

Hanna: We used to have crazy mornings. Before, it was getting up, getting Josiah to daycare, Tom taking care of the animals. But this year was better because I was part-time.

On caring for their horse:

Tom: We brought [Pete] home — we used to have him on a separate nearby property. I would only see him for 30 minutes a day. Now that he's here, he has less space, but we see him a lot more. And he actually gets more activity because he's here with us.

Hanna: Tom also fixed the plumbing so pipes bring water right to Pete, and added a heated water system [so the water doesn't freeze in winter].

On the cost of living:

Tom: In Vermont, land is expensive. You have to be independently wealthy, inherit it or find someone who will rent it [to you]. So we're renting land that has not been maintained for 25 years. We're using Pete to take down 20-inch pasture pine [to turn the land into hay fields]. The hay is going to Pete now [for food], but in the future we would like to sell the hay.

On the value of raising their son around animals:

Hanna: It teaches [Josiah] responsibility and empathy, life cycles, and science. It's good for his immune system. He learns where food comes from. Josiah goes and helps on the dairy farm, where he's learned about life and death.

Tom: He's seen baby cows that are dead and he knows that it's sad. He gets it, and then he moves on. And that's the thing I was most afraid to teach him, and now he's learned it at such a young age. It's sad, but he also grasps the joy of life. When he talks about his family, he talks about the chickens and Zorro the dog and Pete the horse.

On how farm and family life teaches responsibility:

Tom: [When you become a parent], you really understand what it means to put your head down and get the job done. And then, even though you're exhausted and it's 11 at night and all you want to do is go to bed, you've got to go take care of the animals. Or you're at a party and it's the first time you've hung out with friends in six months, and you've got to go home and feed the chickens.

Hanna: My sister lives in a city and they're always going to shows and on vacations and going out to eat, and we're like, Well, we have to buy hay.