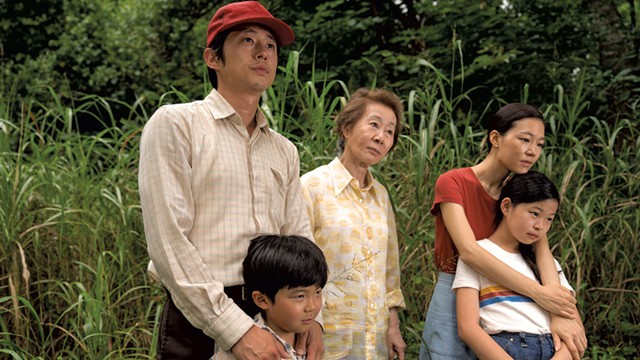 Our streaming entertainment options are overwhelming — and not always easy to sort through. Right now, the 2020 films that thrilled festival audiences and garnered award nominations are still trickling onto streaming platforms and into local theaters. Two of those movies are celebrations of America — its roads, its rural heartland, its people — with bittersweet modern twists.

In the excellent Nomadland (Essex Cinemas, Savoy Theater, Hulu), which I wrote about in December, Frances McDormand plays a woman who embraces an itinerant life in her van after her factory town goes kaput. In writer-director Lee Isaac Chung's Minari (Savoy Theater, rentable starting February 26 on various platforms), a Korean American family sets its sights on an American dream: making a living from its own land. Already honored with a Golden Globe nomination for Best Foreign Language Film, this quiet spellbinder could be a contender for Best Picture.

In the 1980s, immigrants Jacob and Monica Yi (Steven Yeun and Yeri Han) make their living in California sexing chicks for poultry breeders. Jacob dreams of doing something less soul killing: growing vegetables to sell to Korean markets. Over Monica's objections, he buys an Arkansas farm and brings the family to live in a trailer on the property.

Monica worries about the remote location, given that their son, David (Alan S. Kim), has a heart condition. To watch David and his older sister (Noel Cho) while she and Jacob work, she invites her mother, Soonja (Yuh-jung Youn), to come from Korea.

David doesn't know what to think of his grandmother, who comments acerbically on his bed-wetting habit and would rather teach him to be a card shark than bake him cookies like a "normal" grandma. But she also teaches him to grow a versatile plant called minari that, she promises, will adapt and thrive in this new soil. Can the Yi family do the same?

Minari opens with the Yi family arriving at their new home on a hot summer day, and it soon feels as if neither they nor we have ever been anywhere else. With a soundscape of trilling insects and dreamy cinematography by Lachlan Milne, Chung evokes the vastness of summer in a child's mind, stretching like an ocean to September's horizon.

Much of the story unfolds from the perspective of David, whom young Kim plays without a false move. Chung's own rural childhood inspired that story, as did Willa Cather — whom, the filmmaker recently wrote in the Los Angeles Times, he had never read until he asked the universe for inspiration and her name popped into his head.

"Insecurities and missteps can plague writers and artists who come from rural places," Chung wrote. Reading Cather's reminiscences of her farming youth, he was emboldened to turn his own memories into a film.

That story explains a lot about the strange power of Minari. While most of the action takes place in the trailer and its environs, the movie doesn't feel claustrophobic so much as imbued with the emotional intensity of memory. This is a kind of immigrant tale that modern American audiences may not expect: rural and steeped in love of the land.

While the narrative hits some familiar beats, and some poignant ones, Chung steers away from sentimentality. Yeun gives a powerful performance as a man full of frustrated determination to wring profit from a troubled plot. We sympathize easily with Jacob, but Monica's fears make sense, too.

Youn enters the film with an electric jolt; it's no surprise that critics' groups have singled her out for awards and nominations. Part teasing trickster and part woman with a past, Soonja galvanizes the family to confront its troubles — and to survive them.

Fans of Terrence Malick will recognize something of his rapt attention to pastoral quietness in Minari, but without the flashy stylistic flourishes. This story sinks into viewers and takes hold.

Mudbound (2017; Netflix): Two families, one Black and one white, work the same unforgiving plot of Mississippi Delta land in this beautifully shot historical saga from director Dee Rees, which examines race in America from a distinctly rural perspective.

The Farewell (2019; Amazon Prime Video, rentable): Up for another tearful-yet-unmawkish drama about an Asian American family? Awkwafina plays a New Yorker who struggles with her family's decision not to tell her Chinese grandmother about her terminal diagnosis in Lulu Wang's heartfelt Golden Globe winner.

The original print version of this article was headlined "Minari"