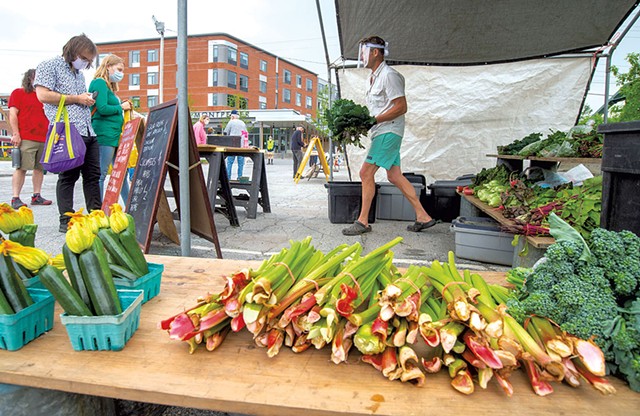 After a year of navigating guidelines for one-way traffic flow, preorders and limited capacities, Vermont's farmers markets are gearing up for a fairly normal summer.

While farmers markets had their own special guidelines in 2020, they're now part of the Group A sector in the Scott administration's Vermont Forward plan for reopening the state, which includes low-contact, short-duration businesses in outdoor and controlled environments. In addition to following the universal guidance for Group A, individual markets may still implement their own safety guidelines.

The Burlington Farmers Market will start its season on Saturday, May 8. It's staying in the South End, returning to the lot at 345 Pine Street for its third season, with weekly markets from 9 a.m. to 2 p.m.

Market-goers can expect to observe precautions such as social distancing and mask wearing, as required by the state's universal guidance. But the overall experience will be more relaxed than last year's, and the number of vendors will approach full capacity, new market manager Hannah Stearns told Seven Days.

"We've done away with the one-way shopping, so people can move freely throughout the market," Stearns said.

Shoppers will also be able to consume prepared foods on-site, and they may even see samples from vendors. "We're excited to have people eating their food and getting as close to back to normal as we can at the moment," Stearns said. "I think we're all expecting a really busy season."

Stearns also manages the Stowe Farmers Market, which will move to 2043 Mountain Road. The market will operate at full capacity on the green between the Stowe Motel & Snowdrift and Edelweiss Mountain Deli beginning on Sunday, May 16.

In Montpelier, the Capital City Farmers Market hosted bimonthly outdoor markets during the winter at 133 State Street. On May 1, weekly summer markets will start at the same site, with nearly 50 vendors filling the lot. Masks are required, and eating and drinking are allowed only at designated picnic tables, manager Keri Ryan said. But live music is back, with Julia Ribak kicking things off.

Several markets will return this year after a 2020 hiatus.

The Shelburne Farmers Market opens for the season on Saturday, May 29, in a temporary home at Palmer's Sugarhouse. New manager Jeanne Kaczka-Valliere wrote in an email that organizers hope the market will eventually return to its usual location at the Shelburne Parade Ground. For now, it will spread out in the space around the historic sugarhouse.

Starting June 6, the Winooski Farmers Market will be back on Winooski Falls Way every Sunday. The market is hiring a new manager, and vendor applications are open through April, Downtown Winooski executive director Meredith Bay-Tyack confirmed.

The Vergennes Farmers Market will return to the city green on Main Street on Thursday afternoons as of June 17, manager Chris Reck wrote in an email, adding, "It's exciting to be coming back after a difficult year."