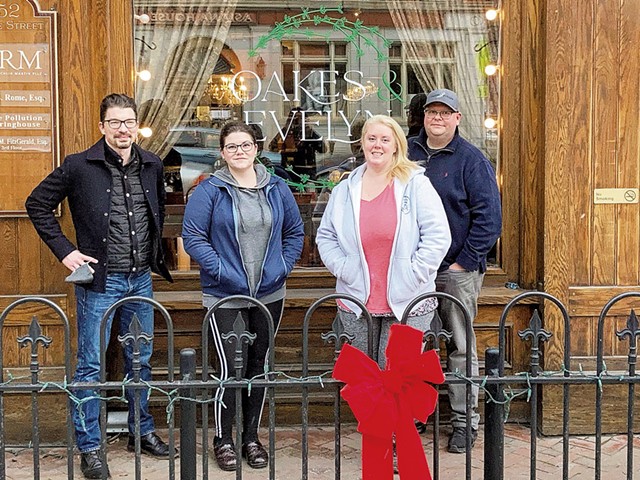 After a decade at the Hanover Inn's Pine restaurant, executive chef Justin Dain has left to open his own restaurant: Oakes & Evelyn, coming to Montpelier in early February 2021. The chef-owner will be joined by chef Amanda Champagne, his longtime "right-hand girl" at Pine, Dain said.

Oakes & Evelyn will be located at 52 State Street in the space most recently occupied by Kismet. Kismet chef-owner Crystal Maderia moved her restaurant back to its original location on Barre Street in September.

Dain and Champagne currently reside in New Hampshire, though both are originally from Vermont. Dain, who grew up in Waterbury, has degrees from the Culinary Institute of America in Hyde Park, N.Y., and New England Culinary Institute in Montpelier. Springfield native Champagne also graduated from NECI.

"We both wanted to come back to Vermont. This is something we've been talking about for a lot of years," Dain said. "This is the thing I've always wanted to create."

On State Street, the intimate room with its open kitchen appealed to Dain. "I know it's a crazy time, but this spot spoke to us," he said. "It feels like the space I've always wanted to open."

Oakes & Evelyn is named after Dain's late maternal grandfather and a great-aunt on his father's side, both strong supporters of his culinary career.

Everything is on track for opening the first week of February, he said, with limited indoor dining and takeout, including to-go cocktails created by beverage director and house mixologist James Ives.

Dain described the menu as modern farm-to-table with global touches. Dishes might include Maine scallop crudo with Japanese sweet potato, yuzu, apples and crispy butternut squash, or a local cheese course "three ways" with cheese served straight up, in custard and in fondue. The chefs also specialize in fresh pasta, such as ravioli filled with locally farmed mushrooms served with a truffle-cream sauce and roasted root vegetables.

The welcome in Montpelier has been warm so far, Dain said: "I've had farmers on the street come up to me to ask about selling to us."