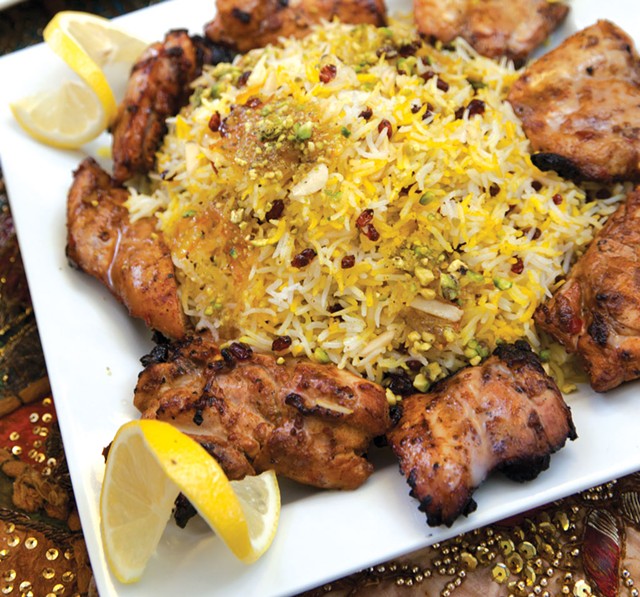 You don't have to be able to pronounce "kashk bademjan" to appreciate the bold flavors and exotic aromas of the garlic-laden eggplant appetizer from Iran. Farah Oberlender prepares it and many other Persian specialties at her namesake restaurant in the heart of Burlington's Old North End.

Fans of other Middle Eastern cuisines — and even Indian food — will find more familiar choices at Farah's Place: hummus, falafel and long-marinated kebabs. Still, the preparations are not only distinctly Persian, they're uniquely Oberlender's.

That hummus crackles with spicy garlic and is showered with tart, purple sumac. The falafel, molded into flat pucks rather than balls, is sweet and herbaceous. The range of kabobs includes a ground-meat variety called koobideh, as well as spicy chicken thighs and yogurt-marinated breasts. They're all served over basmati rice; for $1.50 extra, you can get the shirin polo with barberries and candied orange peels for a sweet and tangy flavor explosion.Then there are the dishes that defy translation. A stew called fesenjan features lamb or chicken slowly braised in a sauce of pomegranate and ground walnuts. From the first bite of tahchin, the ultimate Iranian comfort food, diners will feel as if they were weaned on the rice casserole. With the exception of butter-poached barberries, there's nothing in the recipe that might shock the American palate: Oberlender needs little more than chicken, yogurt, eggs and rice to create the magical dish.

Despite the far-flung origins of both the chef and her recipes, Farah's food is anything but foreign. Many of the ingredients come from local farms, including tender lamb from Morrisville's Winding Brook Farm; the beef in her comforting kofta meatballs comes from Bill Hill Farm in East Hardwick.

The fare is fit for a shah, but the casual surroundings are more like home. Nearly every table has plates with a different pattern, and, more likely than not, Oberlender or her husband, Jeffrey, is filling your water glass. After all, it is Farah's place.