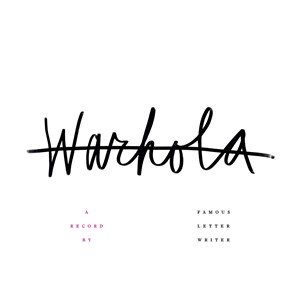 Much of Andy Warhol's art revolved around explicating images that were so common people took them for granted. Warhol and his pop-art ilk saw something worth exploring in the pages of catalogs and comic books, on billboards and flyers. By transforming the ads into high art, they at once celebrated, magnified and ultimately deconstructed the commodification.

Plattsburgh, N.Y.'s Famous Letter Writer demonstrate a similar fixation on pop culture with their debut album, Warhola. But, instead of road signs, comic-book panels or cans of Campbell's soup, the album plays with cultural references from the Warhol era to now, especially related to music, film and technology. The songs illuminate not only their creators' life histories but also American society as a whole. By carefully dropping references into the context of their own experiences, they reveal layers of meaning in everything from Siri to the Columbine school shooting to Better Off Dead.

Front person and lyricist M.I. Devine is also the author of Warhol's Mother's Pantry: Art, America and the Mom in Pop, a companion collection of essays, out now, that examines "how we cut new things from the traditions we're given," according to its cover copy. The SUNY Plattsburgh associate professor of English dives into these themes with his multi-instrumentalist and composer wife, Ru — real name Julia Devine, an adjunct lecturer of English and theater at the same institution. They are artists and academics in equal measures.

Warhola is a satisfying listen no matter how closely it's scrutinized, though it's the kind of record that's begging to be picked apart and discussed. (You could start with the strikethrough of its title, Warhol's birth surname.)

On the surface, the album is a nostalgic take on new wave and '80s indie with clever nods to '60s bubblegum pop sprinkled throughout. Devine's emphatic inflection heightens his lyrics, throttling meaning out of every syllable. Ru's occasional vocal assists are kitschy, colorful and, at times, otherworldly. But her true gift is how she brings Devine's poetry to life through powerful, imaginative arrangements.

"19.99," a bubbly, near-garage-rock jam, describes a fabled future, but its title smirks at capitalism, portending a doomed society. In the same breath, Devine drops references to Gethsemane, the scene of Jesus' betrayal; and Laramie, the Wyoming city where gay high school student Matthew Shepard was murdered. Are these two lynchings really that different?

On "7th Grade,"Devine's musical references ("You sounded like Axl") are accompanied by mental anguish ("They put you on Paxil"). He chokes out phrases with sharp emphasis, drawing out his syllables over smooth organs and plodding drums.

Even on the closer, "Daughter,"which comes off as completely sincere and largely free of the touchstones found throughout the record, Devine sneaks in a Cat Stevens reference atop gossamer synths and solemn electric guitars.

Just like the building blocks of pop art, Warhola is a record that can be examined and explored as deep as a person can fathom. And now that it exists in the world, it's part of the culture it seeks to understand.

Warhola is available on all major streaming platforms. Physical copies will be available in 2021.