Plattsburgh's Famous Letter Writer on the Poetry of Pop 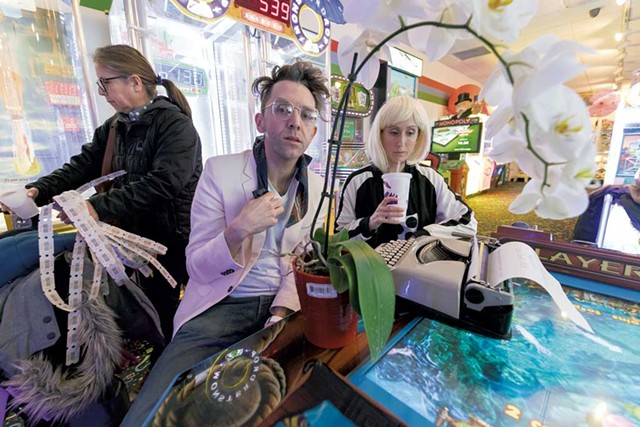 Truly defining pop music has long proved an elusive task. Michael Jackson declared himself the King of it, Radiohead swore it was dead and Andy Warhol wanted to channel it into art. Michael Devine, the lead singer and lyricist of Plattsburgh, N.Y.'s Famous Letter Writer, has spent a lot of time ruminating on what, exactly, pop music is. He has a bold, albeit mildly confusing, take.

"The opposite of pop is pop," says Devine, while sitting in a coffee shop on a recent Friday — the 13th, no less. As his eyes search the street outside, he adds, "What people think of as pop, that's not all that it is."

Devine, who is clad in denim and nursing the remains of his drink, speaks in succinct, cryptically poetic passages. That's also how he writes songs. "The DNA of pop is poetry," he says. "Poetry's burden is the refrain, and so is pop's."

The intersection of pop and poetry is a concept close to Devine's heart. That he straddles those two worlds is evident in Famous Letter Writer's recently released demo mixtape — simply titled Mixtape — which fuses Devine's hyper-literate musings with his wife, Julia Devine's, gorgeously crafted arrangements. A forthcoming full-length will likely explore and embrace that union even further.

As a teenager in New York City, Michael became enamored of the work of slam poet Joel Dias-Porter, who invited him to study with a poetry collective called the Woodshed. There he encountered heavy hitters such as Brian Gilmore, Yona Harvey and Ta-Nehisi Coates.

"I thought these were some of the greatest writers I would ever meet," Michael says. "I was young. Turns out, I was right."

That education spurred him to study and critique poetry. Now an associate professor of English at the State University of New York at Plattsburgh, he has written about the works of pop poet Michael Robbins, among others, for the Los Angeles Review of Books. And poetry has worked its way into his other passion: music. Along with his multi-instrumentalist wife, Michael began to turn his poems into songs about a year and a half ago.

Though the Devines refer to the group and its constantly changing membership as a collective, the heart and soul of the band is the juxtaposition of Michael's lyrical wit and Julia's sophisticated arrangements. Classically trained and Harvard educated, Julia also works at SUNY Plattsburgh, as an adjunct lecturer in the English and theater departments, and as coordinator of the Center for Community Engagement.

Theirs is a cultured brand of indie rock, which the Brooklyn arts online magazine Two Coats of Paint compared to the sounds of Talking Heads and Big Star. But Famous Letter Writer take just as many cues from pop-culture touchstones such as hip-hop, poetry, theater and film.

"To me, Famous Letter Writer is almost a character," Michael explains. "I mean, there's a deep absurdity to the name. Who is actually a famous letter writer? It's someone trying to connect and to recover pop."

The recovery of pop as communal cultural capital dwells at the center of Famous Letter Writer's songs.

"There's a current that runs through our culture," says Michael. "The language, the currency of it, is pop."

To bolster his point, Michael cites a song he wrote called "Cream," in which he references both Robert Frost and the Wu-Tang Clan in roughly the span of a single line.

"I listen to a lot of hip-hop," Michael says, name-checking Chicago poet/rapper Noname as a particular influence of late. "I don't want to abdicate the pop that's in our DNA, and hip-hop doesn't do that," he adds.

Julia agrees. "There is a directness to hip-hop, and society is missing an element of being direct," she says later by phone. "I think our music tries to be direct, as well."

For Michael, that means embracing the three-minute pop song, and writing lyrics that live solidly in our shared cultural language. For instance, on the track "All in My Head," he explores the culture of over-sharing by likening it to a Google doc.

"There is an art to confinement, of putting your music through a window," Michael says. "Pop is the platform. The music becomes the form — the synths and drum machines. And the poetry, the voice, issues the content."

The result is that Famous Letter Writer's music becomes a kind of meta-pop, wherein the music is both about pop and of pop.

The band's new video for the track "Anywhere to Go" is a perfect example. In the five-minute clip, angular, new-wave-inspired indie rock plays while Plattsburgh poet and performance artist Xyzon Sol.a.r. (aka Jamil McCray) is seen wandering the streets, typewriter in hand. We see old camcorder footage of McCray as a child, sharing happy, innocent memories with his family, but the images are juxtaposed with voice-over narration in which McCray rues mistakes that led to his incarceration.

"When I first heard the song, it felt like home to me," McCray writes in an email to Seven Days. "It felt as though I had discovered a piece of the soundtrack to my life. We both took our own paths out of our perspectives of imprisonment, and it led us to each other."

"When we first started talking about the video, I wanted to do a whole François Truffaut, The 400 Blows sort of thing — I love Truffaut," says Michael. "But after talking to Jamil about his experience and what he went through, the video came to be more about incarceration, race and trying to recover the power of your words, even if you're restricted."

The next step for Famous Letter Writer is recording an album with Keith Zarriello, of the New York City band the Shivers.

"He's an incredible songwriter," Michael says of Zarriello, who is something of an underground legend. "Honestly, he's kind of my mentor right now."

The two met after their bands played a poorly attended show last year where, despite the turnout, Zarriello saw something in Famous Letter Writer.

"It seemed they were tapping into something more tied to what rock and roll is supposed to be all about," Zarriello says. "They were completely unconcerned with any current trends or trying to seem cool, which actually made them very cool to me. I realized I drove eight hours to play for no one, but in the end it was to meet Famous Letter Writer."

Michael doesn't know which songs they'll record with Zarriello yet — he's currently reading Warhol biographies and attempting a musical based on the artist's youth. But he knows his collective — whomever it might include at the time — is up to the challenge.

"Famous Letter Writer is made to be a character that can evolve to fit," he asserts.

To fit what, though? Michael's marriage of pop culture and poetry? Julia's sophisticated yet direct arrangements? The ever-changing sonic parameters of the group? All of the above?

Michael smiles and brushes back a lock of unkempt hair as he considers the question.

"Who knows where it will go?" he says with a shrug. "I know we want more, though. We all always want more. We want pop that promises excess."

The original print version of this article was headlined "Strange Currencies"