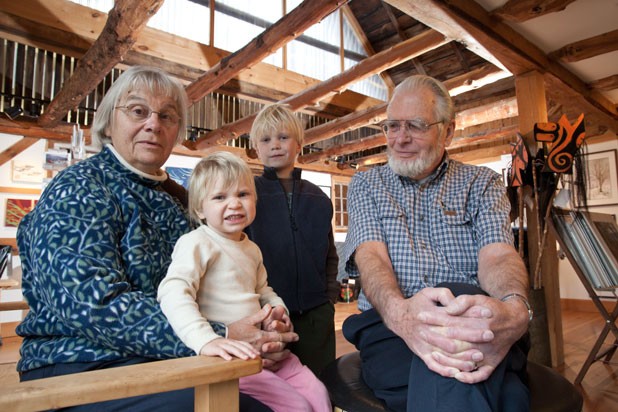 The Emile A. Gruppe Gallery, in pleasant, rustic quarters on Barber Farm Road in Jericho, may be one of the lesser-known art venues of northern Vermont, but its namesake is among the best-known artists associated with the state.

Gruppe (1896-1978) painted woodsy landscapes in an impressionist style quite like that of Claude Monet. Winslow Homer had an equally discernible influence on the seascapes Gruppe composed along the rocky coast of northern Massachusetts and, late in life, in the tropical light of southern Florida.

Born in Rochester, N.Y., and raised in the Netherlands, Gruppe began spending time in Vermont in the 1940s. He regularly brought students to the Jeffersonville area from the art school he had cofounded in Gloucester, Mass., with his mentor, John Carlson.

Unlike many painters of Vermont’s fields and woodlands, Gruppe found inspiration in the off-seasons. Rather than painting familiar scenes of high summer, deep winter or peak autumn, Gruppe preferred to render November, with bare limbs exposing the architecture of trees, and to depict with quick brushstrokes the snow melt and ice breakup of April, when the landscape is in motion.

About a dozen of Gruppe’s Vermont and Gloucester paintings are on display — and for sale at roughly $15,000 apiece — in the gallery that his daughter, Emilie Gruppe Alexander, opened in 2003. Works by a couple of contemporary Vermont artists, such as architect-turned-watercolorist Harald Aksdal, are also on view, and the venue hosts regular temporary exhibits.

Otherwise, it’s pretty much a family affair here. Fabric collages by Gretchen Gruppe Alexander, executed in the manner of Japanese gyotaku, or fish prints, hang near a Charles P. Gruppe watercolor of a couple of kids standing on a beach. Gretchen, 34, is one of four children born to Emilie and her husband, retired physician Stuart Alexander; Charles P. Gruppe (1860-1940), a self-taught artist, was Emilie’s grandfather and Emile’s father.

A winter show by members of the Northern Vermont Artist Association hangs in a separate room in the rear of the gallery. There’s a Gruppe connection here, too. Emile was a member of the association, which was established in Burlington in 1931. And the exhibit of Vermont landscapes, on view through December 23, is entitled “Inspired by Gruppe.”

The gallery is as Vermont-y as can be. Housed in a converted sheep barn built in the 1860s, it abuts a pair of rooms equipped with storage units containing vegetables and meat from the adjacent Jericho Settlers’ Farm. Locally famous for its pasture-raised heritage pigs, the farm is run by — you guessed it — a member of the Gruppe family. Christa Alexander, another of Emilie and Stuart’s children, grew up on the land that her parents purchased in 1965. Christa and her husband, Mark Fasching, operate a year-round CSA.

The Gruppe Gallery thus may be the only Vermont venue offering one-stop shopping for pork chops and oil paintings.

Emilie Alexander, 71, is both the custodian and disseminator of her father’s work. Having inherited dozens of his paintings, she’s deeply versed in his artistic career as well as in his paternal role. And, with a hospitable smile on her face, she’s clearly pleased to provide a visitor with a mini-biography of her dad, the artist.

Unlike many aspiring painters who encounter resistance from parents worried about their financial security, Emile Gruppe had a father who actually encouraged him to pick up the brush. (Two of Emile’s three siblings were also visual artists.) Charles Gruppe had won fame in the Netherlands as a rare American member of the Hague School, a group of Dutch artists who painted marine and farm scenes in the gray and beige hues of northern Europe. A few of Charles’ paintings were collected by the Dutch royal family.

Emile Gruppe acquired his early art education in the Hague, where his family lived until he was 17. He then studied at the National Academy of Design and the Art Students League in Manhattan, and moved to Gloucester in the early 1930s. There, Gruppe supported his own family on the proceeds of his paintings, supplemented by his work as a teacher and author.

Emilie was born in Burlington during one of her father’s sojourns in Vermont. “We used to stay at the Smugglers’ Notch Inn,” she recalls. “He loved that area as a place to be and a place to paint.”

And Emile Gruppe sure could turn out product. “He was very prolific,” his daughter notes, estimating his output at 200 pieces a year. When asked how he could complete a 3-foot-square oil painting in less than two days, Gruppe would respond, according to Emilie Alexander, “When you’ve been working with a brush as long as I have, it comes out pretty easily.”

The gallery includes a display of instructional books by Emile, including Brushwork for the Oil Painter and Gruppe on Color, both published by Watson-Guptill. Near them hangs one of the artist’s palettes, which has been made into a clock. It doesn’t keep time, though, because “the batteries keep dying and they’re hard to change,” Emilie Alexander explains.

This off-the-beaten-path gallery can be tricky for a first-time visitor to find without a map, GPS or smartphone (a link on its website sends viewers to MapQuest for directions). But, despite its relative obscurity, the Emile A. Gruppe Gallery is very much worth discovering.

“Inspired by Gruppe,” a group exhibit by members of the Northern Vermont Artist Association, is on view through December 23 at the Emile A. Gruppe Gallery, 22 Barber Farm Road in Jericho. Open Thursday through Sunday, 10 a.m. to 3 p.m. Info, 899-3211. emilegruppegallery.com