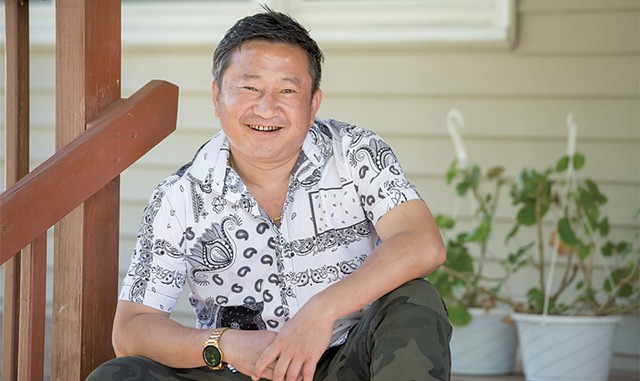 Bidur Rai spends his days knocking on doors, checking to see if someone on the other side might need his help. He's a family support consultant for the Vermont Family Network, an organization that supports children, youth and families, especially those with disabilities or health needs.

Rai works primarily with non-English speakers, translating at medical appointments and assisting with benefits applications and other paperwork. But when he immigrated to the Green Mountain State as a Bhutanese refugee in 2015, Rai said, many in his community couldn't imagine him in this type of role.

At the time, Rai used a wheelchair due to lingering sports injuries that put pressure on his spine, affecting his ability to walk or stand without assistance. People said he was not fit to hold a job and urged him to apply for Supplemental Security Income, the federal program designed to help aged, blind and disabled people with little or no income.

"I told them that I can read, I can write, I can let someone understand. I can understand by myself. I can speak this language," Rai said. "Let me get some type of job so that I can make money by working."

He now walks without a cane, he's been working for six years, and his family recently purchased a home in Burlington. He is confident that he wouldn't have reached this stage if he had listened to the stories others told him about himself.

On Friday, June 3, Rai will share his journey alongside seven other self-advocates and families of children with disabilities at Voices of Our Network, a storytelling event produced by the Vermont Family Network. The in-person event, at the Film House at Main Street Landing Performing Arts Center in Burlington, will also be broadcast via livestream.

Rai's belief in his potential to make positive contributions has been central to his story. At the refugee camp where he had lived in Nepal, he kept busy. He was a teacher and youth counselor, he earned an English degree, and he ran a grocery store and canteen until his health began to interfere.

By 2016, the year after he arrived in Vermont, his health had improved enough that he was able to work as a cashier at a University of Vermont dining hall. In 2018, he learned about a job opening at the Vermont Family Network, which had helped find childcare for his daughter when he first arrived. He was excited by the idea of work that would make a positive impact, particularly for other refugees facing language barriers. So, even though the organization helping him with his job search told him he didn't have enough experience or the right type of education, Rai asked one of his doctors to help him apply. He's been working for the network ever since.

Storytelling is integral to many of the Vermont Family Network's offerings, said Jenny Norris, a family support consultant for the organization. Its Family Faculty program allows parents to share their experiences with students studying education, medicine and other health-related disciplines.

"One of the things that really motivated me about this event was [that] once a nursing student asked a storyteller at one of our parent panels, 'What do you do for self-care?' And the parent replied, 'I do this. This is what I do. I tell my story,'" Norris said. "And that comment really impacted me."

She realized that storytelling not only empowers self-advocates and families, it provides a way for them to find support. Speakers wanted to learn how to share their messages more effectively, so Norris organized several workshops with storytelling coach Susanne Schmidt.

The sessions were so well received that the organization applied for a grant from the Vermont Arts Council to bring Schmidt back and host a community storytelling event, Voices of Our Network. 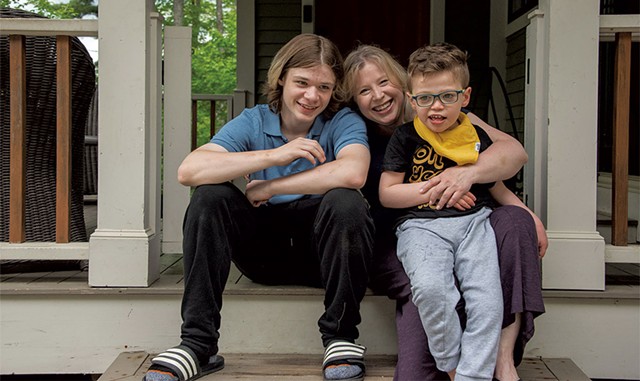 Erika Smith, a nurse and mom of two from East Montpelier, has previously spoken to students and professionals about her 6.5-year-old son, Rowen, who has a severe brain malformation that prevents him from speaking or walking. The prospect of connecting with a wider audience immediately piqued her interest.

"This is a little different because it's really telling my story and not his, and that's something I haven't experienced before — kind of my experience as being his mom," Smith explained. "And so it's been a little scary, and it's been a pretty emotional journey — really sitting down and writing and going over exactly what the story is that I want to tell."

At the mic, Smith hopes to capture both the challenges and the celebrations of raising two little boys whose needs differ. Though those celebratory moments might look different for other families, Smith said the commonalities matter just as much. Rowen's hopes and desires are similar to those of many kids his age, she said. He's excited about making friends and going to school.

The experiences that will be shared on Friday are diverse and important to absorb, Smith continued, especially for people who have not faced similar challenges themselves.

"I've learned so much from speaking to [them] and hearing the stories that the other storytellers are preparing," Smith said.

The participants began working with Schmidt, the storytelling coach and event coproducer, in March to hone their stories for the stage. The speakers have been encouraged to share their experiences in whatever way feels most comfortable, she said.

For example, one storyteller who has a visual impairment has opted to use an audio recording rather than speak live onstage. The lights in the venue will dim to bring the audience "closer to the experience that she has in the world," Schmidt said.

"I guess my hope always for storytelling events, but certainly for this event, is that someone in the audience is moved by something that they hear," she said. "That maybe they come in with some particular set of expectations, or something they think they know about a particular person or the world in general, and that the story they hear changes their perspective for the better."

Rai's goal is to broadcast "positive vibes'' with his story, which was prerecorded for Friday's event. Though there's no way to encapsulate his entire journey in just eight minutes, he hopes to get an important message across: that life is precious and surviving is worth it.

"Losing hope is one thing, and giving up is another thing. Never give up ... You can sense yourself. So, don't be thinking about if someone says, 'You are like that. You did this. You did that,'" Rai said. "You have your own power. You have your own right to describe your life."

The original print version of this article was headlined "Our Stories, Ourselves"