Famed Songbook "Rise Up Singing" Gets a Sequel, "Rise Again" 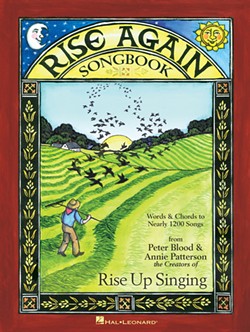 If you happened to join in a campfire sing-along at any point over the last 30 years, there's a good chance you're familiar with Rise Up Singing. Since it was published in 1988, the songbook has been a staple of camp counselors, musical ministers, traveling folk singers and anyone else who might lead group renditions of "Blowin' in the Wind," "If I Had a Hammer" or any other of the 1,200 songs in its spiral-bound pages. With nearly one million copies of the book in print, Rise Up Singing is one of the most successful American songbooks in history. For many, the tome was a cornerstone of their musical upbringing — this writer included.

Earlier this summer, the book's creators, married folk singers Annie Patterson and Peter Blood, released a follow-up: Rise Again Songbook, published by Hal Leonard. Like the original, the sequel features the chords and lyrics to some 1,200 songs, ranging from timeworn staples of the American and British folk canon to more modern tunes. The new edition includes songs by the likes of the Avett Brothers, Coldplay, the Decemberists and Feist.

This Sunday, October 11, Patterson and Blood host a concert in celebration of the book's publication at the Middlebury United Methodist Church. Folk artists Bill Harley, Charlie King and Magpie — all of whom contributed songs to the new volume — will also perform.

While Rise Up Singing is a national phenomenon, its origins trace back more than 40 years to Farm + Wilderness summer camp at Tamarack Farm in Plymouth, Vt. Blood was a counselor there and frequently led sing-alongs. But the teenage campers were less interested in singing the traditional folk fare offered in the camp's songbook at the time and more hip to then-current tunes by singers such as Bob Dylan, the Beatles and Joan Baez. So, in 1973, Blood gathered a group of campers and spent the summer compiling a new songbook.

The project proved so overwhelming that Blood continued working on it for years. In 1979, he published a songbook called Winds of the People. But because he hadn't licensed the songs in the book, it was an underground tome, available primarily at house concerts and by other means that wouldn't alert copyright watchdogs. The book sold some 30,000 copies almost entirely through word of mouth.

Still, Blood wanted to find a way to publish a legitimate songbook.

"We needed to find a way of making the book aboveboard," says Patterson in a recent phone conversation.

Blood and Patterson, who had become a couple in 1981, approached Sing Out!, the nonprofit organization that Seeger founded. With the help of the iconic folk singer and his wife, Toshi Seeger, Blood and Patterson convinced Sing Out! to publish a new, legal songbook. Addressing the organization's board, Seeger said, "This is just why we created Sing Out! magazine, to encourage ordinary people to sing with each other."

With the help of the Seegers and other folk singers, Blood and Patterson set to work compiling Rise Up Singing. Meantime, Sing Out! used its influence to persuade music publishers to sign off on the copyrighted material that was being included. According to Blood, Seeger had his own theory about how to clear that hurdle.

"He said, 'Don't even bother to ask 'em,'" recalls Blood with a chuckle.

Perhaps wisely, that advice was not heeded, and every song included in Rise Up Singing was done so legally. Blood used $50,000 he'd saved from sales of Winds of the People to cover royalties for the new volume. In other words, he used the money he should have, legally speaking, spent on royalties for the old book to make the new one legit.

"Hopefully the government doesn't come after us for that," jokes Patterson.

The beauty of Rise Up Singing is its simplicity. No musical notation is included, just basic chords and lyrics. To sing songs from the book, you need to be familiar with the songs already — or, better yet, sing along with people who do.

Accessibility was one of the primary criteria used to decide which songs should be included. That meant steering away from more obscure tunes in favor of classics that most people might know. Additionally, the singers placed importance on choosing songs with positive messages that encourage hope and empowerment.

Rise Up Singing was successful far beyond Blood and Patterson's expectations. In 1998, Sing Out! approached the couple about compiling a sequel. But the nonprofit was on uncertain financial ground and lacked the resources to launch the project. The idea was shelved for more than a decade. Then, in 2011, Seeger suggested pitching music publishing giant Hal Leonard, with whom he'd previously had positive experiences and who had published the trade version of Rise Up Singing. The company signed on, and work on Rise Again began in earnest.

The new book follows roughly the same blueprint as the original. The songs are presented as simply and as easy to parse as possible. Many of the original categories remain and are joined by new sections, such as Pub Songs (call-and-response tunes and drinking songs), Rock Around the Clock (early rock and roll) and Millennial Songs (mostly indie songs published after 1995).

"One of the visions we had for Rise Again was to include categories that weren't in Rise Up Singing," says Patterson. She and Blood, with the help of about 17 folk singers, including Seeger and Phil Ochs' sister, Sonny Ochs, vetted some 5,000 new songs.

The hand-drawn illustrations, this time, are by Patterson, Meghan Merker and Mona Shiber. And though a traditional typeface has replaced the handwritten lyrics of the original book, the same vibrant, all-together-now spirit of Rise Up Singing remains intact. In an era when you can find the chords and lyrics to almost any song in existence online, that's a remarkable feat. In fact, the internet itself might make a book like Rise Again indispensible.

"If Woody were here, he'd wryly point out that you can experience a download, but you can't download an experience," writes British songwriter Billy Bragg in his foreword to Rise Again.

Seeger, who died earlier this year, wrote the introduction to Rise Up Singing. And he dictated a preface to Rise Again in 2014 — likely one of the last messages he published — that expands on that idea.

"The older I get, the more I am convinced that if there's a human race still here in a hundred years, one of the main reasons will be that we've found ways to sing together," Seeger wrote. "And perhaps if we find the right songs, even people who are so filled with hate they are ready to pull the trigger on somebody — we can reach them, too. Who knows?"