Fame-Seeking Vermonter Gets His Shot in a New Book 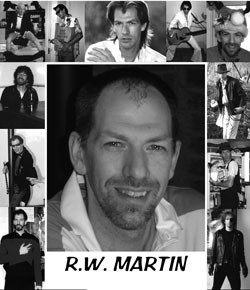 In our media-drenched culture, stage spectacles and movies are sometimes more relatable than real life. R.W. Martin of Starksboro certainly feels that way. “I want to be stuck in that stage world — “Somewhere Over the Rainbow,” he says, breaking into song.

Martin, 43, took a step forward in his quest for world domination with the recent release of Holy Headshot: A Celebration of America’s Undiscovered Talent, by Patrick Borelli and Douglas Gorenstein. Judging from this strange and outlandish collection of headshot photos and resumes from performers across the country and beyond, the book’s authors just might be laughing at, not with, their subjects. Martin doesn’t mind: “At work, at play, at the mall, I try to go for the rib cage and make somebody laugh,” he says. “I get discouraged sometimes and want to give up, but I couldn’t if I wanted to. I’ll be 90 years old with an oxygen tank, cracking jokes on my death bed.”

While he’s no household name, the long-time performer has experience under his belt. Vermont studios, Stoneworks Entertainment (now Champlain Pictures), and the semi-extant Zen and Chaos Studios have provided small-time opportunities, from lead roles to work as an extra. Martin has also made his way into wide release. He was an extra in the Vermont-shot film The Spitfire Grill and appeared on “Rescue 911.” That dead Romulan on “Star Trek: The New Voyages”? R.W. (Randy William) again. Martin’s maniacal dedication to his craft has led him at times to go 40 hours without sleep several times a week, while simultaneously working his regular job and filming a role.

Martin isn’t sure how Holy Headshot’s authors tracked him down. It could have been one of his several YouTube channels, or one of the many websites where he has posted his headshot for free. They may even have found Martin’s own website, recently vanished with the demise of AOL Hometown. But it’s pretty clear what it was about Martin’s headshot that Borelli, a comedy writer, and Gorenstein, a photographer, found unique.

An actor’s headshot is generally just that: a full-face, pensive-looking close-up of the job hunter. To display versatility, the performer may also have a card bearing a few different looks: sporty, elegant, tough — anything he might be able to play.

Martin took this concept further. The actor’s 8-by-10 squeezes in not one, not three, but 12 different photos — a headshot in the center surrounded by images from various scenes. He didn’t want to get passed over for roles based on his natural look, which is gangly, long-nosed and slightly goofy — but, on the whole, normal.

“They always say, ‘You’re not the right type,’ or ‘We just don’t envision you for this role.’ You need to look past that — put a wig on me!” Martin exclaims. So he put more than a few wigs on himself. Posing at home with his own costumes, backdrops and a camera with a timer, he photographed himself as Ace Ventura, The Riddler, Elvis and Snake Plissken from Escape from New York, to name a few.

The center shot of Martin as himself was taken at his home by friend Chad Brosseau. Martin calls the night of the shoot “a wicked sad story.” Everything was in place, he says, but just as Brosseau was taking the first pictures, “My cat Willy died right on the kitchen floor. I took a few minutes to cry and finally pulled myself together a bit. My eyes were full of tears. Chad said, ‘Should we do this later?’ I said, ‘She’s not coming back,’ and we got to it. You could see the tears, but Chad is good at Photoshop. He retouched it, but you can see there’s something funky with my eyes.”

On the book’s website, some actors featured in Holy Headshot have reported positive fallout from their appearance there, but Martin’s hopes of discovery have not materialized since the book’s October 28 release. “Not for lack of trying,” he notes. When not working nights at Lowe’s and helping to raise his two young daughters, Martin continues to chase his Hollywood dream.

Right now, that goal is TRON. The 1982 Disney sci-fi film, which he calls “one of the greatest films of all time,” is slated to receive a sequel — once again starring Jeff Bridges — in 2010. Martin says missing out on appearing in this chapter would be heartbreaking. He has made attempts to contact the film’s producer without the benefit of an agent, and went so far as to give him a preview of what the audience might see if he were cast. “I took a screenshot from TRON and I put my face over Jeff Bridges, so it looks like I’m looking at TRON instead.”

When asked why he never made the leap to Hollywood, Martin doesn’t hesitate. “Back in the day, when I first wanted to do it, I had parents who were sick, and I didn’t want to go in case something happened,” he says. “Now I have three kids. I can’t up and move everybody who likes where they are. It’s not because I’m scared. I guess that family is a bigger priority than going to California and maybe getting work.”

Martin says he has posted a varied portfolio online so his creative work can be seen all over the world, including “The Gary Wendall Show,” an eight-episode mockumentary series posted on YouTube in which a Martin-ish character finds himself unemployed and trying to make it as an actor in Vermont. Martin is convinced that industry folk will eventually come calling.“It is hard to do it here,” he concedes. “But there’s got to be somebody somewhere who can get past the fact that I’m in Vermont.”