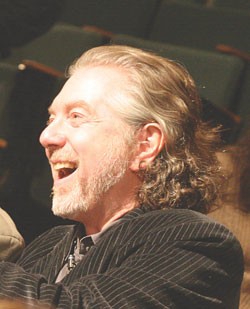 VERMONT — Two Vermont celebrities are siding with FairPoint Communications in its high-stakes campaign to win regulators’ approval for the purchase of Verizon’s landlines and broadband service in northern New England. Opponents describe the move as a desperate attempt to woo locals.

In radio spots now airing around the state, independent filmmaker Jay Craven expresses appreciation for the high-speed Internet access that FairPoint provided to his Northeast Kingdom home and office. Edward Behr, Peacham-based publisher of The Art of Eating quarterly journal, offered a similar endorsement in ads heard a couple of months ago.

Craven and Behr were not paid for the pitches — nor, they say, did FairPoint supply any in-kind compensation such as free installation or a break on monthly bills. Craven notes, however, that Verizon had given a grant to his film company for its 2002 documentary about heroin use among Vermont teens.

Both the publisher and the moviemaker say their spiels for FairPoint were motivated mainly by the benefits accruing to their respective businesses as a result of the higher-speed Internet link the company provided.

“My business wouldn’t be in Vermont if I didn’t have DSL,” Behr says, referring to the digital subscriber line technology that carries signals faster than dial-up but more slowly than either fiber optic or wireless connections. Behr adds that he sees no reason to block Verizon from ditching its Vermont DSL and landline operations. “They didn’t seem interested in bringing services to this area,” Behr says in regard to the New York-based telecom giant.

Craven emphasizes that his blurb on behalf of FairPoint should not be taken as a rejection of some trade unions’ arguments against the proposed sale. His radio paean was intended only as a response to his specific situation, Craven wrote in an e-mail message, adding, “It was not meant as any judgment on other issues involved, about which I knew nothing and am not in a position to judge.”

For as long as his film company had to rely solely on dial-up Internet service, “disconnects and long waits made it nearly impossible to function,” Craven wrote from China, where he is on a business trip. FairPoint’s installation of DSL triggered “a change that was so dramatic in our lives that I really can’t describe it in words,” he recalls. If that higher-speed connection had not been put in place, Craven adds, it’s possible that two of his films would not have been completed.

FairPoint’s ability to deliver broadband service to dial-up-dependent rural communities represents a key point of contention in regulators’ review of the pending $2.7 billion transaction. Opponents say that FairPoint, a comparatively small telecom company headquartered in North Carolina, lacks the financial resources to fulfill its pledge to provide DSL to pokey parts of Vermont, Maine and New Hampshire. Regulatory bodies in all three states are expected to decide soon whether Verizon and FairPoint can consummate their deal.

Communications and electrical workers’ unions in the region are fighting to kill the sale. They worry that FairPoint, the 18th largest telecom firm in the United States, will not provide as much job security as does Verizon, the nation’s second-biggest, after AT&T. Pensions and health benefits are also matters of concern.

The union arguments aren’t all about self-interest, either. They also suggest that Verizon’s customers may experience a decline in service quality and an increase in rates if the sale gets green-lighted. In addition, the unions say, FairPoint lacks the technological chops that Verizon has in abundance.

The DSL service that FairPoint promises to provide ranks as a “horse-and-buggy technology” in comparison to the warp-speed wireless and fiber-optic links potentially available from other telecom companies, says Mike Spillane, head of a Vermont local of the International Brotherhood of Electrical Workers. Verizon, he adds, “has the capacity to do a much better job.” And once a company of its scope pulls out of the Internet business in Vermont, “we’ll never get anything like it back again,” Spillane warns.

The radio ads featuring Craven and Behr represent a “Hail Mary” on the part of FairPoint, he adds. The spots may sound persuasive, but they are actually cries of desperation by a panicked corporation, says Spillane. FairPoint will careen into financial turmoil if its planned expansion into northern New England does not go forward, the union rep argues. FairPoint spokeswoman Rose Cummings shoots back that her company does have sufficient financial and technical resources to follow through on the sale and on its vows to regulators and consumers. She notes that some big players on Wall Street are offering the loans needed to seal the FairPoint-Verizon deal. And Cummings describes her firm’s DSL service as “state-of-the-art high-speed broadband.” The company has achieved success, she adds, by satisfying customers in rural areas and small urban markets.

Cummings would not indicate whether FairPoint plans to air additional ads featuring Vermonters with some degree of name recognition. Such information could provide advantages to opponents of the sale, she says.

For their part, the unions can’t afford to conduct a media campaign against the sale, says Spillane. And they are, in any event, now focusing their efforts on Vermont regulators rather than on the general public. “We’re putting everything we have into persuading the people who will be making the decision,” he says.