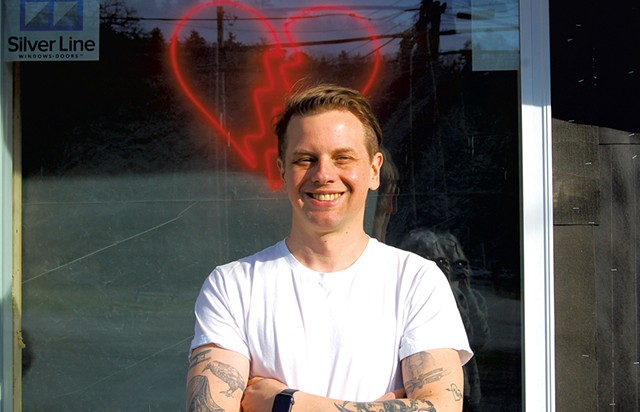 The Upper Valley will have a new destination for summer fun when Fairlee native and cocktail pro Matt Walker starts serving at Broken Hearts Burger. The modern take on a classic midcentury burger stand will open at 192 Main Street in July.

In March 2020, Walker, 42, was negotiating a lease on a waterfront space in Burlington. The pandemic nixed that deal, and soon he was spending more time in his Upper Valley hometown.

"I'm kind of a dreamer, and I started fantasizing about what it would be like to open up something really cool in my favorite small town," Walker said.

He found an affordable Main Street building and did a gut renovation. The interior is a nod to midcentury diners, complete with a vintage 200-play jukebox loaded with 1960s and '70s rock, blues, punk and rockabilly.

But the building's outdoor space will be the centerpiece, Walker said. The underutilized front parking lot will become an 1,800-square-foot dining area with 40 seats, raised garden beds, lawn games and ice cream takeout windows, all enclosed by flowers and planter boxes.

Broken Hearts Burger's savory menu will feature Glazier's hot dogs and smash burgers, including the double-patty, double-cheese Heartbreaker and the Gordie, a vegetarian spinach-based burger from an old family recipe. Fried chicken will come regular or Nashville hot-style. Featuring ingredients from nearby farms, all burgers and sandwiches on the opening menu will be $8 or less, Walker said.

He called Broken Hearts Burger "a hyperlocalized Northeast version of In-N-Out Burger that also has beer and wine." Twelve draft lines and an extensive bottle and can list will include local, obscure and affordable craft beers and natural wines.

Walker has crafted cocktails at Nitehawk Cinema and the Richardson in Brooklyn, N.Y., and at Winooski's Misery Loves Co. He'll channel that experience into his soft-serve flavor combinations, including agave-almond, horchata, ruby chocolate and local strawberry made with fruit from Newbury's 4 Corners Farm.

"I want to take everything that's good about that era of food, the honesty and the simplicity, but give people new flavors," said Walker, who still hopes to have a Burlington space locked down by next year.

He sees Broken Hearts Burger as a brand, he explained, with Fairlee as a test run. His plans for a second location include an expanded bar serving modern tropical cocktails.