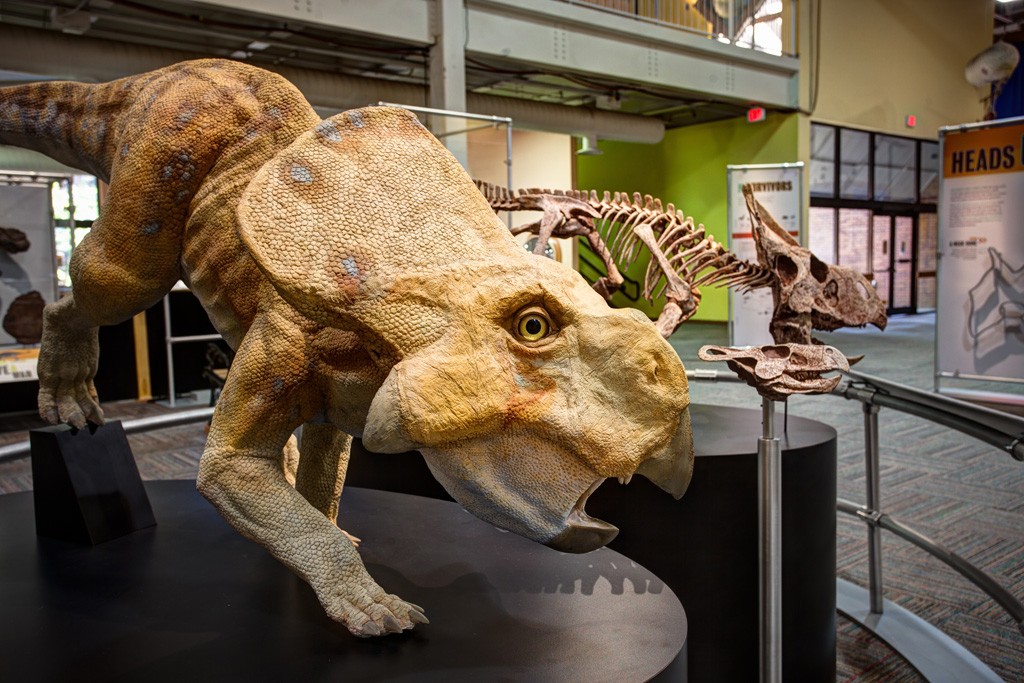 For the first time in 20 years, the Fairbanks Museum & Planetarium in St. Johnsbury is hosting a traveling exhibit. "Dinosaur Discoveries: Ancient Fossils, New Ideas," organized by the American Museum of Natural History in New York, aims to give viewers an idea of what living, breathing dinosaurs were like. Part of the Fairbanks' yearlong focus on extinction, the exhibit opened this month and will remain on view into December.

"Dinosaur Discoveries" covers four themes. The first section explores musculature and how dinosaurs moved, while the second recaps important scientific discoveries using a diorama of the 130-million-year-old Liaoning Forest. The third focuses on new interpretations of dinosaur behavior, detailing the possible functions of unusual crests and frills. And the final section reviews theories of mass extinction precipitated by an asteroid, volcanic activity or massive climate change.

Those divisions aren't entirely clear from the displays crammed between cases of meticulously preserved birds and beasts in the Fairbanks' permanent collections. It's a wonder the museum was able to fit the roughly 2,000-square-foot exhibit into its gallery hall at all — the massive Triceratops skull nestled against a case containing a taxidermied bison may make viewers a little claustrophobic. But, for the most part, the mixture of interactive video components, three-dimensional models and explanatory panels provides an instructive and exciting experience.

For example, videos show visitors how an apple looked traveling down the throat of an Apatosaurus and why a Tyrannosaurus rex would lose to an ostrich in a footrace. Below a screen displaying an animation of an Apatosaurus' neck musculature, viewers can get a more tactile experience by fitting two rubbery "neck bones" together.

Museum director Adam Kane says his favorite part of the exhibit is "the diorama that shows the feathered dinosaurs, because it relates so well to the museum" — referring, no doubt, to the thousands of stuffed birds on display.

While the Fairbanks is known for its permanent exhibitions of animal life and, of course, its planetarium, the touring exhibit provides a fresh perspective and gives its visitor traffic a significant boost. "We want to give people a reason to come back," Kane says. "We're constantly upgrading [our] permanent exhibits, but many times that can go unnoticed. Whereas, if you can bring in a traveling exhibit, you can give folks something to come in and see, and then they get to appreciate the rest of the museum."

The first four days of the dinosaur exhibit brought a 75 percent increase in gate and store sales over comparable dates last year, Kane reveals. "We were doing some high fives in the office," he says.

The Fairbanks is journeying to the past with "Dinosaur Discoveries," but administrators' eyes are on the future — and the community. At the entrance to the museum, a series of panels by Norwich illustrator David Macaulay (author of The Way Things Work) addresses extinction on the local level.

This year, "we decided to combine a series of exhibits and a major program around the theme of extinction," says Anna Rubin, director of external relations at the Fairbanks. "And these panels by David Macaulay look specifically at 'What does extinction mean in Vermont?' It's really a hard concept to grapple with, so we wanted to make it local and to look at the various stages."

The "major program" Rubin mentions is a presentation by Elizabeth Kolbert, Pulitzer Prize-winning author of The Sixth Extinction: An Unnatural History, who will speak on October 2 as part of the museum's annual William Eddy Lecture Series. Kolbert has covered climate change extensively for the New Yorker, and her book addresses the current extinction of species across the planet, propelled in large part by human activity.

Kolbert's presentation "will cover a lot of the themes we're talking about" in the dino exhibit, Rubin continues. "Like how animals evolve, what might bring them to extinction [and] what our role is. It kind of wraps up many of the themes this museum is about: observing the world around us [and] understanding ecosystems and habitats."

"Dinosaur Discoveries" offers an informative vision of the past while continuing a conversation that, organizers hope, will prompt viewers to pause and examine the future.

The original print version of this article was headlined "Dinos and Disasters: Fairbanks Museum Explores Extinction Past and Present"