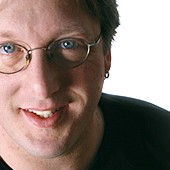 This column makes it official — all is fair game now. I want to thank Seven Days for welcoming me aboard. And thanks in advance to the many well wishers — and probably not-so-well wishers — whom I hope will read this column closely each week.

Some of you know me from my various stints in journalism. I’ve covered Vermont politics and its people since high school, when I was a sports stringer for The Barton Chronicle. More recently, I founded and ran The Vermont Guardian, a statewide print weekly and online daily.

I’ve lived in Vermont since I was 2, spending my childhood in the Northeast Kingdom — Norton, Morgan and Holland — and graduating from North Country Union High School, and then from Bennington College. For the past 10 years I’ve lived in Burlington with my family, right next door to Seven Days co-owner Paula Routly.

I’ve been reminded that I have some big shoes to fill, but thanks to 15 years of investigative reporting, my own closet sports some pretty well-worn footwear.

Peter Freyne, my predecessor in this space with his long-running “Inside Track” column, was a fearless reporter and is still a helluva guy. He’s a hard act to follow — though, like any good second act, I don’t plan to mimic his routine. Nicknames will probably not be found here, but you can expect independent, behind-the-scenes reporting — with dashes of humor — that holds the high and mighty accountable. As this new column’s name suggests, everything and everyone will be fair game, and will be treated fairly.

That’s enough about me. Now, on to what you’re here for.

Legislative Meltdown — Plain and simple: Last week, it sucked to be Entergy, or any of its high-paid lobbyists who failed to stymie the Vermont Legislature’s plan to make the Louisiana-based company live up to the deal it made when it bought Vermont Yankee in 2002. This week the Entergy gang hopes to shore up a veto by Gov. Jim Douglas, or to find some other way around having to pony up nearly $400 million for the eventual closing and cleanup of Vermont Yankee — a cleanup that some estimate could cost as much as $800 million.

A similar Chicken Little ploy worked for Entergy and its fans a year ago when Douglas vetoed a special tax on Vermont Yankee.

This time around, tempers flared when Senate President Pro Tem Peter Shumlin called IBM lobbyist John O’Kane a liar for misrepresenting what lawmakers want from Entergy through the legislation. I mean, imagine a lobbyist lying. As if.

Thanks to Vermont Public Radio reporter John Dillon, who had positioned a microphone nearby, the exchange made it on air.

Despite O’Kane’s spin, the House voted, albeit short of a veto-proof majority, to go along with the Senate’s plan to force Entergy to cough up that $400 mil for the decommissioning fund. The plant could be shuttered as early as 2012, though its owners still hope to extend that license until 2032.

O’Kane did bend the truth plenty when he charged the legislature was changing the rules of the game on Entergy. In fact, it’s Entergy that has changed everything.

The corporation wants to spin off all its plants into a separate limited liability company, absolving itself of any responsibility to Vermont Yankee, or to Vermont. That would add $4 billion to its bottom line, but would leave the newly created LLC hugely in debt from the get-go.

According to The Wall Street Journal, “Entergy Corp. doesn’t propose to retain any interest in a nuclear-power company it hopes to create by spinning off a portion of its nuclear-power business, and instead proposes to keep a 50 percent interest in a new nuclear-services company that would run the plants.”

That, my friends, is not the company that Vermonters contracted to run their lone nuclear power plant. You know, the one that meets one-third of our power needs, keeps our skies blue and is such a good corporate citizen.

As a result, lawmakers are worried that since Entergy is walking away from the plant as an owner, it won’t put in enough money for decommissioning, and then the state will be on the hook for the whole $800 million.

Entergy’s top lobbyist, Brian Cosgrove, a former executive and political director of the Vermont GOP, told listeners on the “Mark Johnson Show” that the $400 million liability would affect the company’s credit rating, and be a drag on the bottom line.

Let’s look at that statement a bit closer, shall we?

According to Standard & Poor’s, a Wall Street ratings agency, the proposed additional $400 million for the decommissioning fund will not affect Entergy’s bond rating.

And it sure doesn’t look like the payment would hurt the corporation’s profits. Entergy reported first-quarter earnings last Friday of more than $308 million, a 45 percent jump from a year earlier.

Another concern for lawmakers is that Entergy has for years wanted to take money out of the decommissioning fund to pay for the dry-cask storage of spent fuel. Though federal rules allow that, the State of Vermont has warned against it each time VY raises the issue.

In 2001 testimony before the Public Service Board, then-state nuclear engineer William Sherman claimed Vermont Yankee’s owners had a strong case to sue the federal government because it had reneged on its pledge to remove spent fuel from nuclear sites beginning in 1998.

That money, which could be as much as $150 million in Vermont Yankee’s case, has already been collected from Vermont ratepayers and handed over to the federal Department of Energy (DOE).

“Ratepayers should not be liable for paying again for spent fuel disposal, and my expectation is that [Entergy] will succeed in receiving fair damages,” said Sherman, according to a transcript of his testimony.

Other nuclear power plant operators have successfully sued the DOE, plowing their legal winnings into their respective decommissioning funds. I wouldn’t put it past Douglas and Entergy officials to make an end run around the legislature and announce a joint pledge to reseed the fund with money from a possible future court settlement.

Douglas enjoys being the white knight who saves taxpayers and businesses from the wicked ways of the Democrats. That may be a tough role to play this time.

“Governor Douglas has to choose between protecting a Louisiana-based company that is about to put $4.5 billion in their pockets or protecting the taxpayers and ratepayers of this state,” said Shumlin.

Even if Entergy had a change of heart and put the money into the decommissioning fund, that fund would still be short by many millions.

And, banking on winning a court battle to wrestle money away from the feds is neither safe nor reliable.

Instead, it was Gaye Symington who got the biggest response. Just the mention of her name brought the audience to its feet — three times — at the beginning of the program.

Former Gov. Madeleine Kunin introduced the House Speaker and could barely keep herself from announcing Symington as the party’s gubernatorial candidate.

But, it’s not meant to be — yet. Symington has promised to keep her political future under wraps until the legislature adjourns. That’s scheduled for May 9.

“It would be my great pleasure to pass the torch to the next woman to become governor of the state of Vermont,” Kunin added. That’s a line we’re likely to hear again in the coming weeks.

Anthony Pollina, who has received invitations to speak to Democratic committees in Lamoille and Windham counties, seemed content to sit on the sidelines (literally — his table was way to the left of the speaker’s podium.) He politely ate his meal without once being recognized from the speaker’s rostrum. Not even, mind you, by U.S. Sen. Bernie Sanders, for whom Pollina once worked and has campaigned alongside during his previous attempts to win a statewide office.

Symington’s entrance into the race may pose other troubles for Pollina. Former Gov. Phil Hoff, who was Vermont’s first Democratic governor, had thrown his support behind Pollina “in the absence of a viable Democratic candidate.”

Hoff told “Fair Game,” “Now that we do have a viable candidate, I’m not sure what I’m going to do. I like them both. But I do think the Democrats make a mistake in assuming that Anthony Pollina will not get a huge total of votes,” he said. “He’s been out there making a lot of contacts and raising money.”

Symington was spotted the morning after the Curtis Awards having breakfast at Leunig’s in downtown Burlington. Perhaps some campaign advice on the menu? Racine is the only Democrat who came close to knocking Douglas out of the race, and that was in a year when Independent Con Hogan was also in the running — he pulled in 9.7 percent of the vote.

This week, the Republicans gather in Burlington — same hotel, even. Former Maryland Lt. Gov. Michael Steele, who is the chairman of GOPAC, will deliver the keynote, in hopes of rallying some candidates.

The Republicans still haven’t found a challenger to, well, any of the statewide Dems, including first-year Congressman Welch, who has quickly made a name for himself in Washington, D.C. In fact, this past weekend Rep. Rick Hube (R-Londonderry), the former assistant minority leader in Montpelier, joined Welch during one of his community outreach events.

I think that pretty much says it all, don’t you?

Another MD for LG? — Deb Richter, an advocate for single-payer health care in Vermont and a practicing physician, is mulling over a run for lieutenant governor.

She wouldn’t be the first doctor to run for the second-in-command post. As many readers will remember, former Gov. Howard Dean was a family doc during his time in the legislature and as lieutenant governor. In fact, he was tending a patient when he received the news that Gov. Richard Snelling had died. Dean had to be whisked off to Montpelier and sworn in as his successor.

“I am being urged to run,” Richter told “Fair Game.” “However, I still have a lot of thinking to do about this. I have family considerations and, of course, there is my practice, too.”

She’s not sure whether she would run as a Democrat or a Progressive, though Anthony Pollina was one of those strongly urging her to run and possibly join him on a ticket.

One thing is clear: People aren’t flocking to run against incumbent Lt. Gov. Brian Dubie, and the top Democrat in line has had a change of heart.

Democrat Peter Shumlin, who had been expected to announce a run for the post, is now sitting out the race, and will instead run for reelection, he told “Fair Game.”

With Shumlin out of the race, and Symington all but announced in a bid for governor, perhaps the great Progressive-Democratic alliance can still occur.

So, maybe a Symington-Pollina ticket? In a one-on-one with Dubie, Pollina could possibly win in a year where “change” is likely to be the predominant theme.