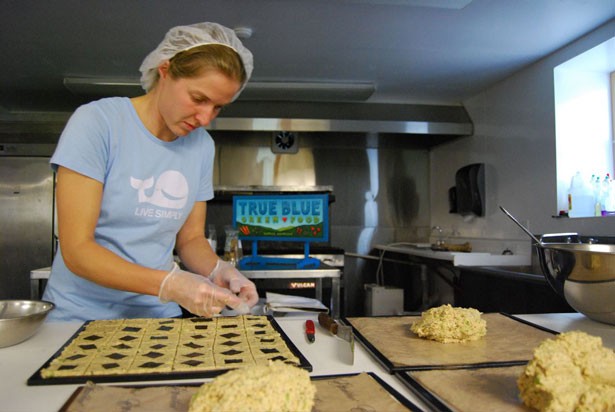 To the human body, 118 degrees Fahrenheit feels too darn hot. To a raw food enthusiast, it's just enough. Heat food past 118F, they say, and you start to neutralize many of its beneficial properties. That's the temperature in any one of the half-dozen dehydrators sitting in Alex Miller's rented kitchen in Killington.

Miller, 25, of Bethel is the founder, owner and operator of True Blue Green Food. Since she started making them six months ago, her selection of raw, all-natural, gluten-free snacks have been gaining fans at co-ops and seasonal farmers' markets in central and northern Vermont.

Raw-food loyalists maintain that the not-even-half-baked stuff contains natural enzymes that aid in digestion, and bacteria that supplement the immune system. Though Miller is in their camp, she's not a dogmatist - or an ascetic. To her mind, raw food is a healthy component of a balanced diet for the whole family, but it doesn't have to be a chore to swallow. She tests recipes on her 3-year-old daughter, Helena, to make sure they don't offend young palates. The kid-friendly theme continues on the snacks' clear, airtight packaging: Miller adorns the labels with fun, whimsical characters, and lends the products names such as Mama Mia Chia Crackers, Ally's Almonds and Uncle Jack's Flax Crackers.

On a recent afternoon in her rented space in the old Killington Grange Hall, Miller is doing her favorite thing: cooking and listening to music. The radio plays Michael Franti and Spearhead, as Miller - whose baby-blue eyes match her shirt - tells how she sat next to the band's manager on the flight back from her native Australia. That encounter landed her a private chef gig in July, when the band came to Vermont to play Higher Ground. "I gave them a box of my product," Miller says, "and I was like, 'Put it on the bus!'"

Miller has been cooking for more than 10 years; she dropped out of her Sydney-area high school at age 15 to begin an apprenticeship to a chef. Four years later, she landed a job as a raw-food chef at the ultra-exclusive Parrot Cay resort on Turks and Caicos Island, a playground for celebs such as Bruce Willis, Keith Richards and Christy Turlington. That's where Miller made her Vermont connection, meeting up with a couple of Morgan horse enthusiasts who were constructing a manse in Mendon. She came to Vermont to be their chef and ended up married - to the local guy who was building their house.

Miller returned to Turks and Caicos to work for clothing designer Donna Karan in December 2006 and again this April, but she eventually got tired of catering to the rich and famous. "The thing about cooking for celebrities," she explains, "is that you're basically a servant. I mean, I could be cooking for a lot of people, doing a lot of good, but I'm just cooking for one person. And there's so much waste, and you have all these bitchy managers telling you what to do."

But cooking for celebrities also paid well enough to enable Miller to start a business that better aligns with her ethics. A central tenet of her mission is the use of local foods and businesses, with the goal of re-circulating money in her immediate community. She gets the apples and maple syrup from Vermont, the organic buckwheat from New York and the seaweed from Maine. Her labels are designed by Burlington artist Sarah Ryan and printed in Rutland.

Ethics can get expensive. "All the vegetables are local and organic," Miller says, "so I'm paying the farmers top dollar." The cost is reflected in the prices of the snacks, which range from $5.99 to $8.99 a bag. Though that may seem like a lot for crackers, it's not making Miller rich. "This is subsidized food," she stresses. "There's no labor cost, and I have no health insurance."

And labor she does. Miller puts in six days a week at the kitchen - she's the only cook - and tours the state's farmers' markets. For now, she doesn't mind keeping True Blue Green Food a one-woman show, since she's happier cooking than sitting in front of a computer fielding orders and making deals. "I'm just trying to keep hold of a few good accounts," she says.

After taking a break to explain the economics of small-scale snack-food production, Miller is ready to get back to cooking. The afternoon's project is making 17 bags of Seaweed Flax Crackers. Big bowls of onions and celery are spread out on a stainless steel counter, with the trusty blender not far away. The rest of the ingredients are flax seed, horseradish, garlic, laver and nori seaweed and raw agave, all of which are organic. Miller, who is lithe and athletic, blends it all together and spreads it on four, square sheets, then cuts it into cracker-sized pieces. Each one gets a rectangle of seaweed in the middle, making the cracker look like the flag of a raw-food nation.

Next, the sheets go into the dehydrator for about 24 hours, emerge, and voilà - the crackers, which have a fibrous texture and a spicy tone, are ready to be bagged and shelved for up to a year. The seaweed crackers are an acquired taste, but Ally's Almonds are tangy and sweet; they leave an airy, clean feeling in the mouth.

Dehydration is the secret to long-lasting natural food, Miller explains, since ingredients like flax seed tend to go rancid with heat. "You're getting all the benefits from the clean, uncooked fat," she continues, "and it'll all just kind of keep going through you."

Digestive euphemisms aside, Miller wholly believes in the virtue of raw, natural food - both physiologically and politically. How does raw food get political? Miller is quick to offer two examples. On September 1, she says, the FDA enacted a regulation requiring that all almonds prepared for domestic consumption be pasteurized. Pasteurization heats the almonds past 118 degrees. They may not be cooked, per se, but they can't be considered "raw" either. "There were two isolated incidents of salmonella," Miller says, "and instead of just pinpointing the trees, they've wiped out the little guys who don't have the facilities." The result has almond-loving raw-foodists upset, since they see it as an infringement on their rights.

A second example hits closer to home for True Blue Green Food, which is seeking to branch out into the breakfast industry with a muesli product. The cereal contains hemp seed, which Miller has to source from Canada because the DEA has banned its stateside cultivation since 1958. Unlike almonds, hemp is a perfect crop for Vermont - it likes a cool, wet climate, and thrives in rocky soil. That's why activist group Rural Vermont helped introduce legislation this year that would permit its industrial growth here. The name of Miller's muesli, Raisin Awareness, plays on the controversy. "I was trying to think: How political can I get with my product?" she chuckles.

Even without formal marketing, Miller's homemade products are gaining popularity. Burlington's City Market has plans to carry them. Healthy Living is "considering it." Barre's L.A.C.E. is one of her best customers: Cashier Bonnie Beede says the demand for the True Blue Green Food has increased steadily since the beginning of October, when the store began selling the snacks.

Can supply keep up with demand? One of these days, Miller hopes to build a green kitchen closer to her home in Bethel, with a root cellar, skylights and solar power. Chances are that a certain local carpenter - her husband - will have a lock on the job. And 3-year-old Helena can look forward to an expanded role in quality control.