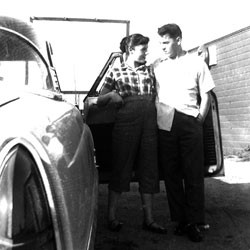 When Lucille Barrett Jarvis (1938-2010) started working at her parents’ Winooski movie theater in 1952, matinee tickets cost 12 cents. Mills were closing in those days, and local working people, pinching their pennies, brought exact change. At the end of an afternoon, her family members say, young Lucille would find herself with a pile of dimes on one side and pennies on the other.

Raised in the cinema business, the native Vermonter, affectionately known as LuLu, watched it change dramatically as the days of double features and drive-ins gave way to those of multiplexes. These days, families are more likely to whip out credit cards to pay for $9.25 3-D matinees at the Majestic 10.

For a time during the 1980s, Jarvis and her husband, Merrill Jarvis II, owned or operated nearly every movie theater in Chittenden County — a total of about 28 screens, says her son Merrill Jarvis III, owner of Merrill’s Roxy Cinemas.

When she passed away on Thursday morning, December 9, Jarvis left behind a changed world. Winooski’s Strand Theatre, where she started her career, burned down in 1955. Burlington’s Flynn, which the Jarvises bought in 1972 and ran as a movie house until 1981, is now a nonprofit performing arts center. The former Showcase 5, which they built on Williston Road, houses Higher Ground. Their Dorset Street cineplex has become Barnes & Noble. These days, screens tend to be concentrated at high-tech suburban megaplexes such as the Majestic, which Merrill’s Theater Corporation built in 2004 and co-owns with Harold Blank.

Movies were always a family business for Lucille Jarvis: Besides the Strand, her parents owned drive-ins in Milton and Burlington. She was 14 and working at the concession stand when she met her future husband, then a 17-year-old projectionist.

“She was a partner in everything,” says Merrill Jarvis II. The couple married in 1956 and embarked on the “strange business” of running theaters, he says. That meant toiling nights, weekends and holidays.

Lucille worked at the Burlington Drive-In the day she gave birth to Merrill III and brought the baby right back to work with her. “I slept in the projection room,” her son says.

As Merrill’s Theater Corporation grew, Lucille handled the day-to-day operation of the theaters, bookkeeping and human resources, says her son, while Merrill II worked with distributors and booked films. On the lucrative concessions side of the business, Lucille bought in bulk and supplied the family’s theaters via her L&M Candy Co.

Frank Manchel, a retired English and film-studies professor at the University of Vermont, has been friends with the Jarvises since 1971. He delivered Lucille’s eulogy last Saturday. “Together she and Merrill really founded the movie business in Burlington,” he says. “These were two people who started out basically with nothing. The two of them worked day and night for 14 and 15 hours a day.”

Manchel recalls Lucille as a community-minded woman who kept a black leather bag in her office filled with $100 bills to give the needy; a “street-wise” business owner who solved problems calmly from her office chair, impeccably dressed in black; a devoted wife; and a demon at trivia games who had no problem besting the professor on his own turf. “She had a photographic mind,” he says. “She could always remember who was in what film and what the film was about.”

Lucille Jarvis went into semiretirement in 1994, when the family sold some of its theaters and leased others to Australia-based Hoyts Cinemas. But in 2001, the Jarvises bought back their theaters and returned to work. “It was in her blood,” says Merrill III. He notes that his mother watched movies in her home theater, not just at work: “She loved movie stars, especially older movie stars from the ’40s,” he says. “She loved black-and-white films.”

To Merrill III, his mother’s passing is “like Ziegfield dying — the end of an era.” He explains that, unlike nowadays when “it’s all huge multiplexes, and the staff comes and goes,” local theatergoers used to know his mom by sight — and call her LuLu.

“She was friendly and outgoing and gregarious with everyone,” he says. “When you went to the Flynn, you always had to say hi to her. People came to see her and not the movies sometimes.” And Lucille had a rep with the local kids as someone who would “take them into our candy warehouse and let them pick out whatever they wanted.”

Manchel says Lucille “had a certain pride not only in what she did but that she had brought to Burlington something that would benefit the community.” While the Jarvises “couldn’t tell a good film from a bad film,” he says, “they could tell a profitable film from an unprofitable film. They always upgraded. They always tried to bring in movies they thought the public would like.”

Whenever it rained or snowed, Manchel adds, Lucille would say, “It’s a Jarvis weekend” — referring to the hordes that often descend on cinemas in bad weather.

And so, on a gray and sleety Jarvis weekend, LuLu’s friends and family gathered to remember her.

“She loved the movies, was brought up in it,” says Merrill Jarvis II, putting it most succinctly. “We both were, and that’s why we stayed with it.”