Facing an Uptick in Crime, a Canadian Border Town "Secures" Its Last Open Crossing Into Vermont 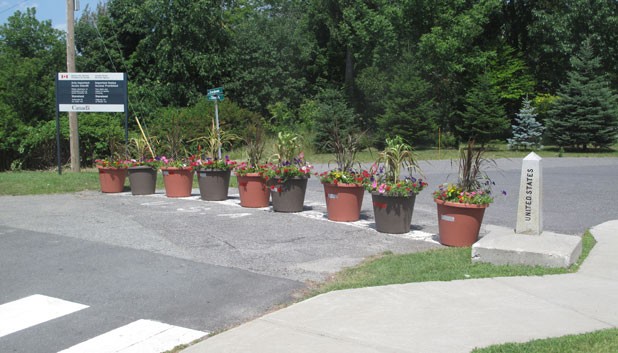 In the years since the 9/11 terror attacks, officials at the U.S.-Canada border have ramped up security, one crossing at a time. Last month, authorities barricaded the last unguarded street at the international boundary between Derby Line, Vt., and Stanstead, Québec. Worried about an apparent increase in illegal crossings and crime, police in the adjoining towns settled on a novel — if temporary — solution for shoring up the boundary on Church Street: a row of flowerpots.

But here’s a twist: It wasn’t the U.S. Border Patrol that insisted on the stopgap measure that will likely become more permanent; the call for tighter security came from the Royal Canadian Mounted Police.

That’s because Canada arguably has more reason for concern. According to a 2010 threat assessment report from the Integrated Border Enforcement Team — a cooperative force of agents from both sides of the border — 2009 marked the third consecutive year in which more people were detained for illegally crossing the border with the intention of entering Canada rather than the United States. Authorities say many of those caught are seeking asylum in a country largely regarded as friendlier to immigrants than its neighbor to the south.

Meanwhile, the Canadian government is poised to enact a new wave of immigration reforms that could challenge that welcoming reputation. Asylum advocates say it’s too soon to know what those changes will mean on either side of the border.

Stanstead and Derby Line have long shared municipal services such as water and sewer lines. Residents recall the days when crisscrossing the international boundary was as simple as a smile and a wave to the border guards. But security along the 4000-mile northern border tightened after September 11, 2001.

In 2009, the U.S. blocked off two of the three streets that connect Derby Line and Stanstead, erecting steel fences that now cut across the roads. Church Street, running beside the famous Haskell Free Library, was the last to remain open. The international boundary is demarcated by a white slash on the pavement, a small stone pillar and a posted sign warning against illegal passage.

With tighter security came complaints from residents on both sides of the border alleging the relaxed friendship between the two sleepy towns was at risk. Derby Line resident Glenda Nye complains about Border Patrol vehicles “flying” down village streets. After decades crossing the border, the 63-year-old Montréal-born dual citizen says she notices interactions with customs officials have changed. They’re more aggressive, she says.

“It’s not at all like it used to be,” Nye says, adding that she believes the ramped-up security is an overreaction.

The unimposing flowerpots on Church Street are a temporary fix until the RCMP can win approval from the town of Stanstead for a more permanent blockade such as the steel gates elsewhere in town. There was an increase in illegal movement across Church Street after the 2009 blockades at Ball and Lee streets, according to RCMP constable André Lirette. In some cases, the explanation is as simple as confused tourists following GPS directions.

Just as often, though, the unprotected Church Street crossing has been an easy passage for border-hopping criminals. In June, the U.S. charged a man named Elias Joseph — who was convicted in the 1990s for assault and grand larceny — with illegal reentry for allegedly crossing the border in a dark sedan at Church Street.

But even crossings with barricades aren’t entirely secure: Last September, a Croatian man allegedly involved in a human smuggling case slipped through the gate at one of Derby Line’s blocked streets and hopped into a waiting vehicle on the U.S. side before he and the driver were caught.

While Lirette admits that flowerpots won’t do much to stop those determined to cross, he hopes it will stop accidental traffic, allowing authorities to focus on “people with criminal intent.”

Is the apparent uptick in border crossings directly attributable to asylum seekers? That’s hard to tell. In the first five months of this year, an average of 385 people each month have requested asylum in Québec, which is on par with numbers from recent years. But those numbers don’t tell how many asylum seekers cross the border legally versus illegally, explains Rick Goldman, the coordinator for the Montréal-based Committee to Aid Refugees. The Canada Border Services Agency does not break down those figures.

Michele Jenness is the executive director of the Vermont Immigration and Asylum Advocates, an organization that got its start helping refugees gain access to the Canadian asylum system. At that time, in the mid-’80s, Salvadorans, Guatemalans and other Central and South American refugees were winning fewer than 5 percent of their asylum cases in the U.S. So they traveled to Canada, where their chances were better. VIAA stepped in to provide support for refugees “stranded in cold Vermont,” as Jenness puts it, as they waited for their appointments in Canada.

By 2004, 14,000 individuals each year were traversing the United States to try for asylum in Canada, compared to 200 heading south. Canada’s generous asylum rules at that time meant these people could present at the border, cross legally and then plead their cases in Canada.

Looking to staunch the flow, Canada finally won a long-sought-after accord known as the Canada-U.S. Safe Third Country Agreement, which says that asylum seekers must apply in the country in which they first arrived — even though, as Jenness points out, the rate of achieving asylum remained much lower in the U.S. Unless a person meets one of a small number of exceptions — including having a family member already legally residing in Canada — individuals can be turned back at the border.

But the agreement has a loophole that refugee activists say actually encourages illegal crossings — and may account for some of the anecdotal increases reported by the RCMP. Under the agreement, restrictions on asylum seekers only apply at official border crossings. That means that if someone enters illegally between crossings — even if they’re apprehended just feet across the border — they’re allowed to make an asylum claim.

“If you walk between the flowerpots, and one meter past the flowerpots, the RCMP picks you up for having entered Canada irregularly … the Safe Third Country agreement does not apply to you,” observes Goldman.

Goldman says that Canada’s official attitude toward immigration is changing — rapidly and dramatically — with a number of new laws set to take effect in the next few months. Come December, refugees will be subject to a more accelerated timeline for making claims of asylum, and their advocates say the 30- to 60-day window for those claims won’t give many enough time to pull together evidence for their cases. Additional reforms scale back refugees’ access to health care, a measure that Goldman says is “cruel and mean-spirited” while saving taxpayers “what can only be described as pennies.” Some refugees will also be newly subject to long-term detention for up to six months.

Goldman worries the new restrictions will discourage some genuine refugees from coming to Canada — and will certainly treat those who do come in a much harsher manner. In the short term, he speculates that the threat of looming crackdowns might encourage a short-term boost in immigration — with more aslylum seekers heading north through Vermont.

But they’ll have to make it past increasingly tight security. Jenness says that Border Patrol operates a wide cordon and has been known to detain aliens in Vermont who claim to be en route to Canada.

“It’s a waste of the U.S. taxpayers’ money,” says Jenness. “Basically these people are trying to self-deport, if you put it in their terms. It’s a real hardship, both on the people and also on our system.”

For Goldman and his colleagues, these are chilling changes that he attributes not to a shift in the general public’s opinions but to a conservative majority in Parliament. He says the country has long prided itself on offering fair and welcoming access for immigrants claiming asylum — in contrast, he alleges, to the situation in the U.S.

“With Canada moving so dramatically to reduce refugee rights,” says Goldman, “it may be that the difference is unfortunately disappearing.”