'Face It' at Studio Place Arts Promotes the Portrait

If you stroll through "Face It," an exhibition at Studio Place Arts in Barre, you might feel as though you're being watched. No, not by surveillance cameras — by the artwork. But the faces seem harmless enough, mostly.

"Face It" is a large group show of portraits — nearly 80 pieces by 35 artists. Most are two-dimensional; the rest, sculptures or other objects. Not all of their subjects look directly at the viewer; in fact, a couple of pieces don't have discernible eyes. But the intensity of so many gazes lends the gallery an intimate, somewhat vulnerable feel.

And, of course, the point of being there is to look back.

The intensity of so many gazes lends the gallery an intimate, somewhat vulnerable feel. tweet this

With so many artworks, the initial challenge is where to direct your eyes first. But the large-scale acrylic painting on the back wall, "Portrait #158" by Charles Lysogorski, clamors successfully for attention. The close-up face of a man with distorted features, outsize glasses, and salt-and-pepper hair is slightly disturbing but also amusing. His caricature-like visage contrasts with the elegant portraits by Ann Young and August Burns to one side and a unique stitched-relief and embroidered piece by Elizabeth Fram, "The Woolgatherer," on the other.

Evyenia Coufos just went straight for the leaves — real ones — for her remarkable collage, "Autumn Self-Portrait." To create one's likeness out of dried botanical matter glued to a piece of drywall is a special kind of inventive. Her earthy assemblage looks part human, part spirit.

The variety of mediums in the SPA show contributes to its appeal. And, um, let's face it, people-watching is irresistible, even if the "people" are made of rocks or feathers or clay. Moreover, the size and diversity of the exhibition has a democratizing effect — a curatorial approach that guarantees every visitor will find some favorites.

For this viewer, a few other pieces particularly stand out. First and foremost are the realist portraits, including self-portraits, by Burns, Young and Ed Epstein. Though their styles differ, these artists create masterful, nuanced, emotionally resonant paintings of the highest caliber. 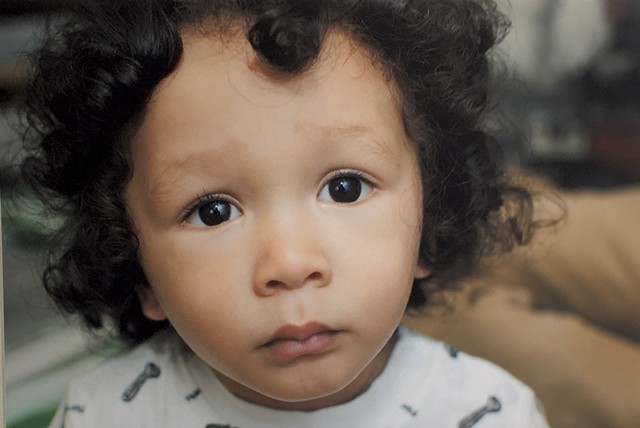 A straightforward chromogenic print titled "Gaze," by Tuyen My Nguyen, captivates with adorableness. Its close-up subject is a brown-eyed toddler of indeterminate gender. Framed by dark curly hair, the child's face looks both innocent and wise, beseeching and a little sorrowful all at once. The expression seems like a plea — not for a cookie but for a world that makes sense.

Teresa Celemin often paints eccentric figures in surreal colors, and "Twelve Women" is no exception. Here, a dozen pastel-hued female faces are stacked in a four-on-three grid, each a little creepy in its own way. Yet somehow the multiplication gives this composition a femme-powered edge. Call it strength in numbers.

Creepiness can be a virtue in the right hands. Among a cluster of strong clay works on pedestals, Susan H. Wilson's "Voices" has a commanding presence. The outsize male head has heavy features, including rather demonic eyes. Wilson has worked a dark matte medium into the stoneware, emphasizing her subject's foreboding physiognomy. Somewhat paradoxically, she also created a beautifully rich surface texture. But the most outstanding detail in this piece is an equally grim "Mini-Me" head protruding from the top of the big head — perhaps the source of the voices. Yikes.

Providing comic relief, Will Wootton's playful 3D "portraits" are composed of river rocks and other found objects of various shapes and sizes. Think Mr. Potato Head made by the Flintstones.

The original print version of this article was headlined "Heady Stuff"