F-35 or Bust? Other Towns Clamor for "the Most Expensive Weapon Ever" | Politics | Seven Days | Vermont's Independent Voice

F-35 or Bust? Other Towns Clamor for "the Most Expensive Weapon Ever" 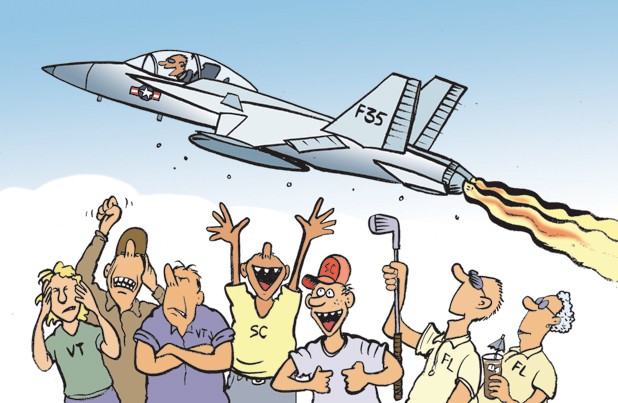 Chittenden County is unique among the six U.S. communities competing to host a new F-35 fighter-jet squadron: Only in Vermont, where the Air National Guard base is a “preferred” site to “bed down” the new fighter jets, have residents mounted significant vocal opposition to the proposition.

Reaction around the five other bases — including those in Utah, Idaho, Florida and South Carolina — has ranged from apathetic to wildly enthusiastic.

One reason? The population density surrounding the Burlington International Airport suggests more residents would be adversely affected by increased noise levels than around the other sites under consideration: Three are active duty; two, like the Burlington Air Guard Station, house Air National Guard units.

The U.S. Air Force won’t explain exactly how it compiled the short list for the F-35. But Kathleen White, who heads civic outreach for Air Combat Command, says the Air Force conducted site surveys and on-the-ground evaluation to weigh capacity, environmental factors, cost and “mission.” The final choice of “preferred” and “reasonable” sites — Burlington AGS among them — fell to the secretary of the Air Force and the Air Force chief of staff.

Vermont’s congressional delegation has so far been supportive of the bed down, though Sen. Patrick Leahy’s spokesman David Carle insists that Leahy’s office wasn’t actively angling for the F-35s. “The Air Force’s decision on basing the F-35 was made on the merits and the clear record of Vermont’s Air National Guard being … the best suited for this mission,” he says.

Of the half dozen contenders, Burlington is the favored air-guard base, while Hill Air Force Base in Ogden, Utah, leads the pack among active-duty bases. Both currently host F-16 operations, which White says would make the transition easier. Read: cost effective. Both also offer unique training opportunities. Hill provides access to the massive, world-class Utah Test and Training Range, with expansive airspace and full-scale, live drop training ranges. White says Vermont’s Green Mountain Boys are in a position to run training missions that permit the fighter jets to interact with nearby Canadian F-18s and U.S. F-15s.

The big difference? The F-35 bed-down proposal hasn’t ruffled any feathers in Utah — whereas, in South Burlington, Winooski and Burlington, scores of residents have flocked to public hearings to air their opinions in Yankee tradition. Mitch Shaw, a reporter for Utah’s Standard-Examiner, describes Ogden as “über-patriotic.” The public hearings there were poorly attended, he says, and those who did show up were mainly contractors or industry types with financial interests in bringing the F-35 to Hill.

“There were probably 10 people that said the same thing,” says Shaw. “‘It might be noisier than what we have now, but it’s the sound of freedom.’”

The Air Force intends to choose one air-guard base and one active-duty base for the initial bed down. That leaves Burlington competing, in a sense, against two other Air National Guard bases — one in Jacksonville, Fla., the other outside of Columbia, S.C.

So far, the F-35 has been warmly received in both communities. A former reporter covering the military in Jacksonville describes it as a “big Navy town,” where, as in Utah, the proposed F-35 bed down didn’t generate much controversy.

“There was no opposition,” agrees Lt. Col. Richard Bittner, the director of public affairs for the Florida Air National Guard. Bittner attended all of the public hearings in the northeast Florida region, and at each one, he says, the comments were all favorable toward the F-35.

One proposed Air Force budget for next year would level a 5 percent cut across the board. “It keeps us in a relevant aircraft,” says Bittner. That’s code for survival among today’s air-guard stations.

Bittner, who visited Burlington when the Air Force began evaluating possible bed-down locations, acknowledges the Jacksonville station is markedly different than Vermont’s: The airport is located in a rural area, 20 minutes north of downtown. The majority of homes in the vicinity have already been purchased and destroyed.

“Just a handful of people are affected by any kind of noise,” Bittner says.

In fact, under the proposed bed-down scenarios outlined in the draft Environmental Impact Statement, the number of people adversely affected by noise from the air-guard stations would actually decrease around the South Carolina and Florida bases.

A search of local media outlets around Columbia, S.C., turned up no sign of opposition to a potential F-35 bed down at McEntire Joint National Guard Base.

Noise is the primary concern of opponents in the Burlington area. Depending on whether 18 or 24 jets are based at the airport, an additional 2863 residents could experience noise levels above 65 decibels, the threshold used by airports to determine adverse sound impacts.

More broadly — and in a few communities around the country — the F-35 has drawn condemnation for its high cost, budget overruns and long delays: The plane has been called the most expensive weapon ever.

Meanwhile, Vermont’s congressional delegation, Burlington Mayor Miro Weinberger and local business leaders are all for a fighter-jet bed down in South Burlington. The F-35 could bring as many as 266 new military positions to the area, and with them approximately $3.4 million in salaries. What’s more, it’s the base’s best survival strategy at a time when the Air Force and Air National Guard are looking to cut costs.

“It’s not just another year-to-year decision on where to put planes,” says Carle. “The F-35 changeover has been in the works for many years, and is changing the Air Force in many ways throughout the entire system.”

It’s unclear what, if any, effect dissenting voices in Vermont will have on the final F-35 decision, which the Air Force’s White says is anticipated in October or November. Or, if it doesn’t “win” this time, could the site be considered for a future bed down as the Air Force rolls out additional F-35 wings? Maybe, says White. “I can’t speculate about a hypothetical situation,” she says.