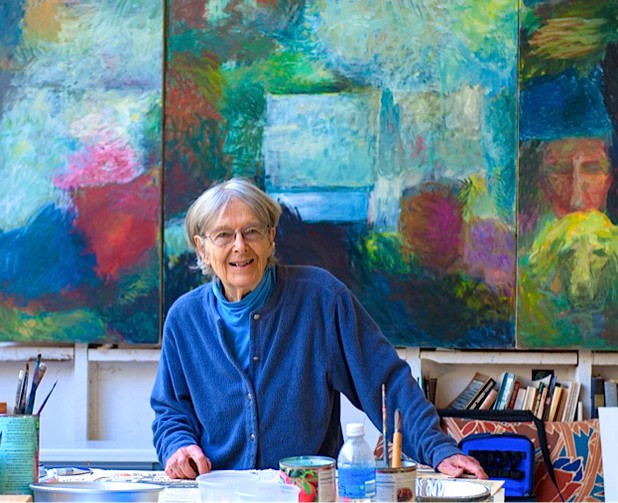 An observer of one of Maize Bausch’s vibrant oil-on-canvas paintings once told the artist that it “looked as if it were made up as she went along.” There’s some truth to the statement — the Charlotte artist’s work is often abstract, and filled with wildly expressive lines. But, as Bausch politely retorted to her critic, “So how else would I paint it?”

The freely executed brushstrokes, bold colors and liberal use of paint hint at Bausch’s very physical painting style, described by her daughter-in-law as “almost dancing.” The 88-year-old isn’t quite as active as she used to be, but her retrospective, now on view at WalkOver Gallery in Bristol, pays lively homage to three decades of emotions expressed through art.

Born in Greenwich, Conn., in 1925, Bausch attended Vassar College and then studied painting at the Art Students League in New York. While living and painting in Manhattan during her twenties, she fell hard for Cézanne and van Gogh. Cézanne, she notes, “just kind of walked over a hill and walked into me. I thought he was just the greatest painter, and when we visited his studio in France, I was absolutely enraptured. Those two artists were my great loves.”

You can see the influence of van Gogh’s visible brushstrokes in Bausch’s work, and the color palette Cézanne used in landscapes such as “Mont Sainte-Victoire” — but there are also reflections (acknowledged or not) of Chagall. There are no Janus-faced figures in Bausch’s work, but a series of portraits recall his use of figurative distortion, as Bausch’s figures don’t always exist on the same plane or obey the same rules of gravity. An artist’s statement on view in the gallery explains this in her own words:

When my focus is landscape, I use the horizon line as an anchor for the rhythms, forces and inner tensions that underlie and, in fact, give birth to the forms of natural scenery. The correspondence of these qualities and those of the human spirit is truly my subject. This makes it necessary for me to eliminate the particulars of any known scene or view, in order to give heightened expression to the experience of correspondence between our inner dynamics and those of the landscape.

In a phone conversation from the East Charlotte house where she’s lived since the ’60s, Bausch describes one work in the exhibit that seems to follow these guidelines: “Family,” a triptych featuring a man and woman together on one side of the canvas and, on the other side of the panels, a child. The last, Bausch explains, is a child in spirit, and is necessary to make the man and woman complete and vital. The landscape is blurred and indistinct, allowing the relationships among the three figures to create the visual drama.

Bausch describes similar relationships elsewhere in her work. For instance, the painting “Joe, Lillian, Dog” started out as just Joe, but Bausch says somehow an unknown figure called Lillian and the dog became necessary to complete him.

Bausch talks frequently about allowing these elements and emotions into her art as she works. Her favorite piece — “Geography of Song” — was inspired by listening to Glenn Gould play Bach, and evolved in what she considers perfect spatial alignment that recalls a colorful sheet of music. Others, such as the recurring image of a man wearing a pair of Ray-Bans, started out as anonymous inspiration; that figure only later became one Bausch recognized as her son, Charlie.

A portrait of her grandson, Quincy, completed in 2010, started with little more than a bright red canvas, but quickly transported Bausch into the type of rhythm she remembers from the late ’70s and early ’80s. She calls these her “most inspired years,” during which she would often get up in the middle of the night to work on a piece.

“Sometimes it felt like my mind was just obeying my arm, since my arm knew exactly where to go on the canvas,” Bausch says of those earlier years. “It was like that when I was painting Quincy. I knew exactly when my last dab of paint became the last stroke, and when I stopped, I nearly fainted because I had been concentrating so hard.”

The WalkOver exhibition spans the years from 1982 to 2010, so there are only a few paintings from Bausch’s earlier, more abstract period. The older works are free-flowing and vibrant, recalling South African art and a 1960s-era Jasper Johns sensibility. They also suggest an artist transported by the physical act of painting, driven to get up in the wee hours to finish an idea.

“I knew that those years were my most inspired period because I had the rhythm and pace and inspiration to keep going,” Bausch says. “I fell in love with the act of painting.

“I still love to go out in my studio and mix colors, but I think ‘Quincy,’ or maybe ‘Ursula,’ was my last painting,” she continues. “I never really thought of stopping, but I think maybe that last burst of energy and inspiration may well be a satisfying place to say good-bye.”

The original print version of this article was headlined "Almost Dancing."