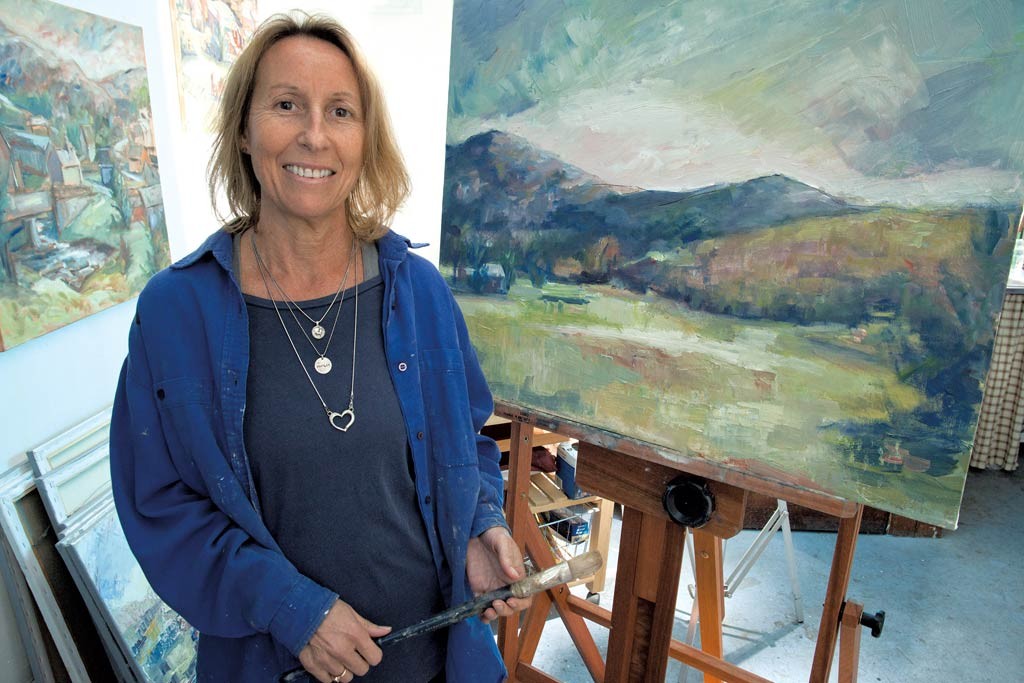 Simply put, Julie A. Davis paints landscapes. Her depictions of mountains, waterfalls, lakes, fields and small Vermont towns adorn her white-walled studio in Burlington's South End. One of the original members of the South End Arts and Business Association, Davis has rented the same studio for 15 years. Each year during the annual Art Hop, hundreds of visitors pass through the tiny space.

"I like being here because this is where the artists are," Davis says, leading a visitor up a creaky staircase to her third-floor studio in the postindustrial building known as the Howard Space. Here, some two dozen artists rent spaces in every nook and cranny. Davis keeps hers spare but cozy: There's a well-stocked dish rack, a mini-fridge and an armchair. The place has an old-school institutional vibe, a striking contrast to the lush natural scenes on the walls.

Davis, 57, is foremost a plein-air painter, meaning she frequently sets up her easel outdoors. "Nature has always been a way for me to feel whole and more relaxed," she says. A lifelong Vermonter who grew up in Barre (her grandfather was former governor Deane C. Davis), she's lived in Burlington for most of her adulthood.

Unlike some landscape artists, Davis is indiscriminate about her subject matter. Her current solo show, at Left Bank Home & Garden on Bank Street, features a range of evocative outdoor scenes from Vermont and other New England locations in various styles.

"Stately Grounds" captures a muted green meadow and the beginning of a path into the woods. "On the Rocks" is a water scene in vivid blues, greens and grays with thick, choppy brushstrokes. "August Shadows" is a nostalgic townscape of Johnson, with late summer's orange light caressing the rooftops. Davis spent nine months in the town last year, painting at the Vermont Studio Center. 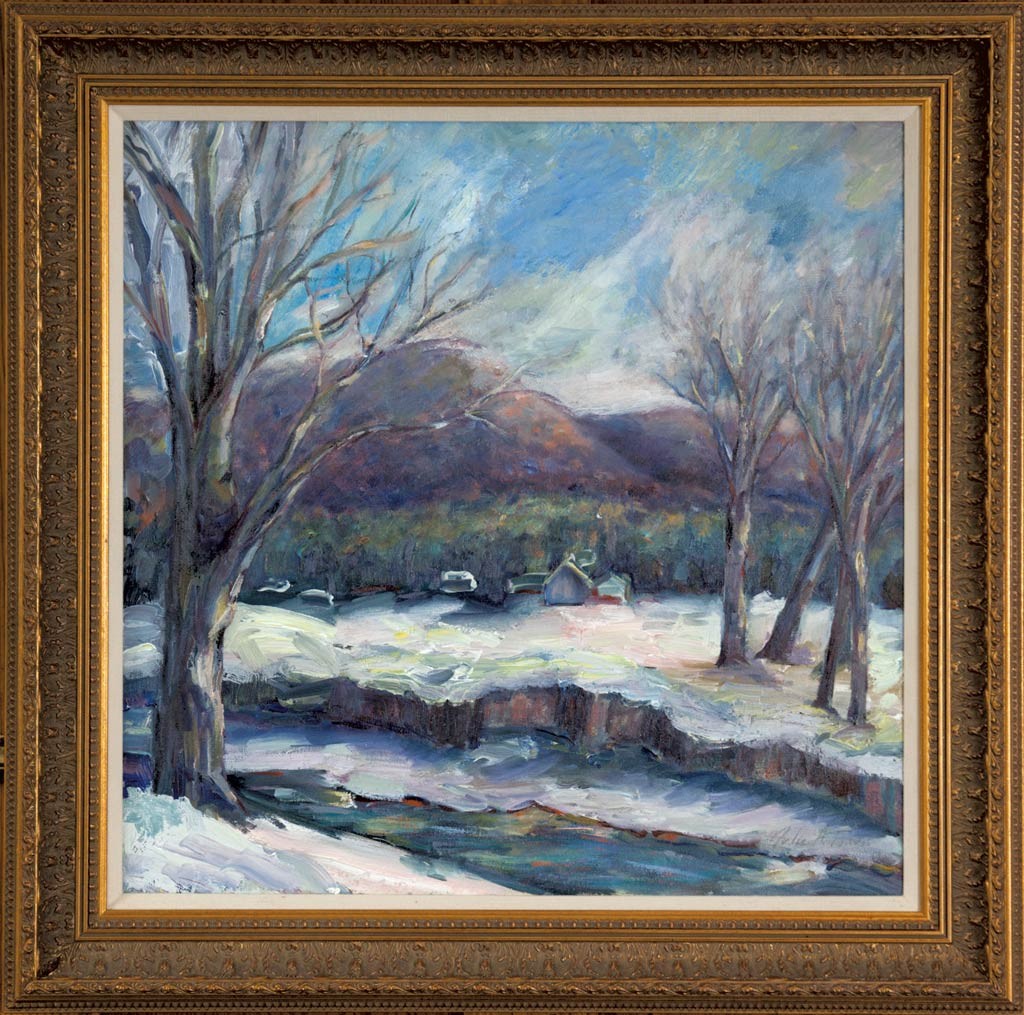 "I just look to find something I connect with," she says of her compositions and subjects. "A tree, a shadow. I feel like there's communication there that you can try to connect with if you really listen."

Being outdoors, Davis reflects, "is kind of like my church. I become pretty much completely immersed."

Once back in her studio, Davis will often return to a painting and rework it. She frequently changes her process to keep herself engaged and, since she's largely self-taught, to push her own boundaries. Davis says she likes the characterization that a visiting lecturer at VSC gave her body of work: "naturalistic expressionist." That is, a loose and spontaneous style of expressionism without social commentary, using the natural world as a vehicle.

In the work that Davis shows publicly, her affinity for landscapes is a constant; her palette, too, tends to stay earthy and muted. "I like painting the more mundane beauty in Vermont," she says.

Stylistically, though, her paintings range from traditional, representational landscapes — which Davis later refers to as her "stiff-upper-lip" paintings — to a contemporary, abstract series with minimal brushwork on white-toned backgrounds. In the latter, it's impossible to tell if one is looking at a still life or a landscape.

"My process changes all the time. I just keep playing around," Davis says, pulling out examples of recent work in distinct styles.

It's tempting to call some of her more free-form work impressionist, but Davis says that's not usually her intention. "I'm far-sighted, so I paint from here," she explains, stepping a few feet back from a canvas. "I start up close, a bit, but basically I'm always backing up to see and responding to what I just did."

Davis' foray into art began well after her schooling and early career. Armed with a bachelor's degree in political science and a master's in public administration from the University of Vermont, she worked as a lobbyist, legal clerk and political adviser before cofounding, in 2000, Vermont HITEC, a nonprofit distance-learning program for disadvantaged Vermonters. Currently the vice president, Davis says she's "jerry-rigged" her life to make time for professional pursuits as well as painting.

Davis had always been a supporter and lover of the arts, but she didn't stand at an easel herself until she was 35 — when a friend roped her into taking art classes. "I had no background," she recalls. "But I took pastel lessons and never looked back."

For several years, Davis dabbled in the local arts scene by participating in Vermont Artists Week at VSC. In 1995, after the death of a close friend, she went to the studio center for an artist residency and quickly found sanctuary in the artistic community and natural beauty of the surrounding area.

Davis concedes that it was one of the first times in her life — after years of being on-the-go professionally — that she'd taken time and space for herself. Painting itself became a "place to heal and connect," she says.

Davis returned to VSC for periodic residencies over the years. Last August, she arrived for a month-long residency and didn't leave until April, when a diagnosis of Lyme disease brought her home to Burlington. "It was not planned," Davis says of her nine-month stay in Johnson. "It was just to continue painting. It was to recover from my life. I've had a lot of loss in the last few years," she adds, referring to the death of her young son in 2011 and a spate of illness in the family.

But painting, spending time outdoors and being surrounded by an artistic community inspired Davis to produce more than 200 pieces of art during those nine months.

"[The studio center] has the feeling of deep immersion and recuperation," she reflects. "I think a lot of people who go there are facing great challenges in their life and recognize the importance of honoring that creative spirit ... [and] the importance of really getting in touch with yourself."

Julie A. Davis' exhibit of new landscape paintings, on view through October 30 at Left Bank Home & Garden in Burlington. julieadavis.com

The original print version of this article was headlined "Finding Ground"