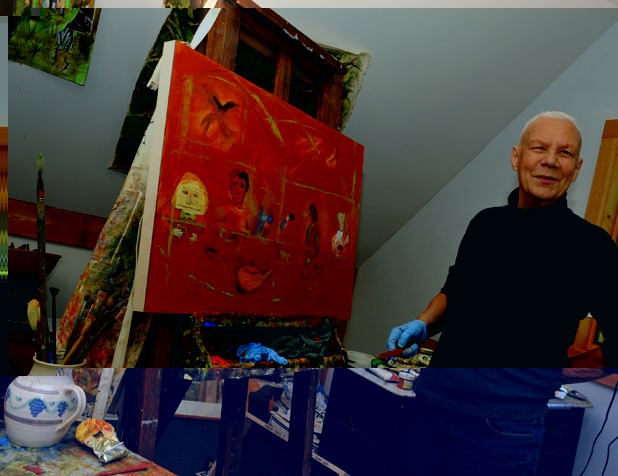 There’s something magical about Anna Dibble’s house, tucked up on a hill in tiny Landgrove, Vt. It’s easy to imagine that if you waited there quietly until after dark, the resident animals — living, painted and sculpted — might prove they had the power to talk.

The 62-year-old artist has spent her career giving voice to animals, first as an illustrator, then as an animator for Disney and other studios, and most recently through her irresistibly droll paintings of dogs, cats and other creatures navigating human social situations.

In a piece called “Unstable Cats,” for example, a dog sits at a dinner table with a pair of kitties, one of whom holds up a human puppet that casts an ominous shadow against a sickly yellow background. Dibble’s text scrawled on the painting reads, “The dog was so shaken by the prospect of going to bed with two obviously unstable cats, he decided he’d never go on a blind date again.”

On a recent morning, Dibble’s real-life dogs, Radar and Pepper, are much more enthusiastic; they greet a visitor with a chorus of barking, followed by a session of insatiable hand licking.

Dibble is dressed in jeans and a casual shirt, yet looks eminently stylish with a jaunty purple scarf tied tightly around her neck, her bright-white hair in a pixie cut. The ’do was not intentional, she explains. Her husband, John Newton, died last February after a battle with cancer, and she lost a lot of her hair as a result of the stress.

“It’s been hard to paint,” she admits, especially to match the rate at which she’d been working for the past several years — Dibble completed 40 new paintings last year for a Brown University show. Still, little by little, she’s getting back into the routine, spurred most recently by a new commission for a Seattle-based restaurant.

Dibble grew up in an artistic family in Peru, Vt. Her dad, Thomas Reilly Dibble, was a painter who owned a frame shop in Manchester. Her grandfather, whom she never knew, had a comic strip in the New York Sun called “Who’s Zoo” that featured made-up animals. Indeed, hybrid animals are a family specialty. A framed painting of a duck wearing a man’s suit, by Dibble’s father, sits on his daughter’s studio desk.

“When I grew up, [my father] was painting all the time. There were painting supplies everywhere,” says Dibble, who began dabbling as a kid. As a young adult, she worked on fantastical pen-and-ink drawings with watercolor washes. Amalgamated creatures — beginning with her childhood obsession, the duck-billed platypus — were a recurring theme. She recalls an early painting of a rhinoceros with mushrooms growing out of its armor.

Dibble’s flair for anthropomorphizing came in handy after college when she got a gig animating for “Sesame Street.” In 1980, she moved to California, where she worked in the animation studios of Disney, Marvel, Hanna-Barbera and Don Bluth. “The world of animation in LA in the ’80s was wonderful,” Dibble recalls. Unlike the live-action Hollywood scene, “it was not slick at all,” she says. “Everything was done by hand back then.”

Dibble put her own painting on hold until she returned to Vermont in 1990 with her husband. They built the house she lives in now, and she worked the craft-market circuit, selling hand-painted T-shirts and aprons, children’s clothes and stuffed (hybrid) animals.

Dibble has two studios in her home, one for painting and one for her commercial work. (She still sells a line of greeting cards.) Both rooms are treasure troves of inspiration. On the corkboard walls, she tacks up photographs — one shows a dog sharing an armchair with a baby, its big paw placed protectively in front of the child — as well as preliminary drawings and magazine clippings.

“I try to work as spontaneously as possible,” Dibble says.

Recently, she’s begun each piece by painting a table on the canvas, then populating it with dogs, birds, people and other unexpected creatures. She loves to build up and take away layers of paint — she might put a guest at the table only to scratch him out later, for instance. Dibble says she always paints the scene before deciding what, if anything, to write as a caption.

She aims to do much more than churn out charming content. “I’m really more interested in the shapes, colors and medium,” Dibble says. Attentive viewers will notice abstractions in the backgrounds, along with intriguing scraped-paint textures and striking color combinations.

The artist is currently working on a painting she says is inspired by Tea Party Republicans: An odd bunch, including Humpty Dumpty, a mallard, a rabbit and two feckless-looking men in T-shirts, sits together at a table laden with teacups and saucers.

Dibble, who is also a writer, has an essay in the current issue of Gray’s Sporting Journal about catching frogs — for their tasty legs — with her dad and family friend, Shep. When she was a kid, she relates, they’d go out on the pond at night with a flashlight, a sawed-off broom handle and a burlap sack. She leaned over the boat’s bow and caught the critters with her hands. Then Shep killed them with one swift “bop” of the broom handle.

Her father, Dibble writes, “taught me about the woods, how to camp with minimal equipment, make fires, capture nightcrawlers, fish with worms and with the flies he tied, and how to catch frogs. He taught me the names of the indigenous birds, insects and mammals, and how they spent their days and nights in each season. He taught me how to be patient when we watched animals, and how to respect them, the way the Indians did when they said a prayer for the deer or bison they were roasting.”

Dibble’s dad also carved a tree trunk into a towering raven totem that now looms in the corner of her living room. The piece is at least seven feet tall, but Dibble says some visitors never notice it. The raven, carrying a fish in a satchel, wears a red cloak; its enormous talons clench the sculpture’s base. The bird would be foreboding if it didn’t seem to have a bashful look in its big black eyes.

Kind of makes you wonder what the raven might have to say.

The original print version of this article was headlined "Animal Kingdom"