On a December afternoon, a bleak mix of snow, ice and freezing rain coats the sidewalks of South Main Street in White River Junction. The only signs of life are well-bundled passersby, clutching their hats in the wind. Even in the sub-freezing temperature, though, many pause to peer in Scavenger Gallery's window. Adjacent to the lobby of Hotel Coolidge, a veritable ecosystem of wearable metal art is on display: dangling earrings in the shape of seed pods, large pendants shaped like beetles, necklaces and pendants molded from fossils.

"I have a curiosity for other forms of life and how life actually exists," reflects gallery owner Stacy Hopkins, the Italian-trained jeweler behind those eye-catching pieces. "We're so focused on the human, and I just find it totally boring."

At the moment, Hopkins' workbench — located behind the counter of Scavenger — is covered by an array of seeds, dried fruits and plants that she collected on a recent trip to Puerto Rico. Other surfaces throughout the small gallery are artfully adorned with specimens of Hopkins' work. Some pieces, such as an ornate, life-size-beetle cuff, are so detailed as to appear sculptural (and priced at $875.) Other pieces — simple, elegant silver ring bands or earrings shaped like shells or acorns — are both artful and unfussy enough for everyday wear.

For Hopkins, jewelry fuses two lifelong passions: art and the natural world. "There seems to be a loss of magic in our culture," she says. "And jewelry was always profoundly linked with alchemy and magic: the power of stones, the detailed work and the precious metals.

"Nature," she continues, "has some of that inherent magic, and it's something we have this inherent connection to in [terms of] form, in seeing some of these shapes since we were little children."

Scavenger is Hopkins' home base, but her jewelry is sold across Europe and the United States. Her work sells well both locally and online, but it has taken off particularly in the European market, where she began her career. Italian Vogue has featured her creations multiple times, and Hopkins recently returned from exhibiting at Paris Fashion Week.

An Upper Valley native who attended Hanover High School and the University of New Hampshire, Hopkins has long-standing personal and professional ties to Europe. She lived in Italy off and on during her twenties, and earned her jewelry certification and training in that country.

Hopkins says her first visit to Italy, on an exchange program when she was 16, cemented her dedication to artmaking. "I always had an interest in art as a kid, but it was never really cultivated, because in school that wasn't a priority," she says. "Going to Italy stirred more of an interest and a passion." 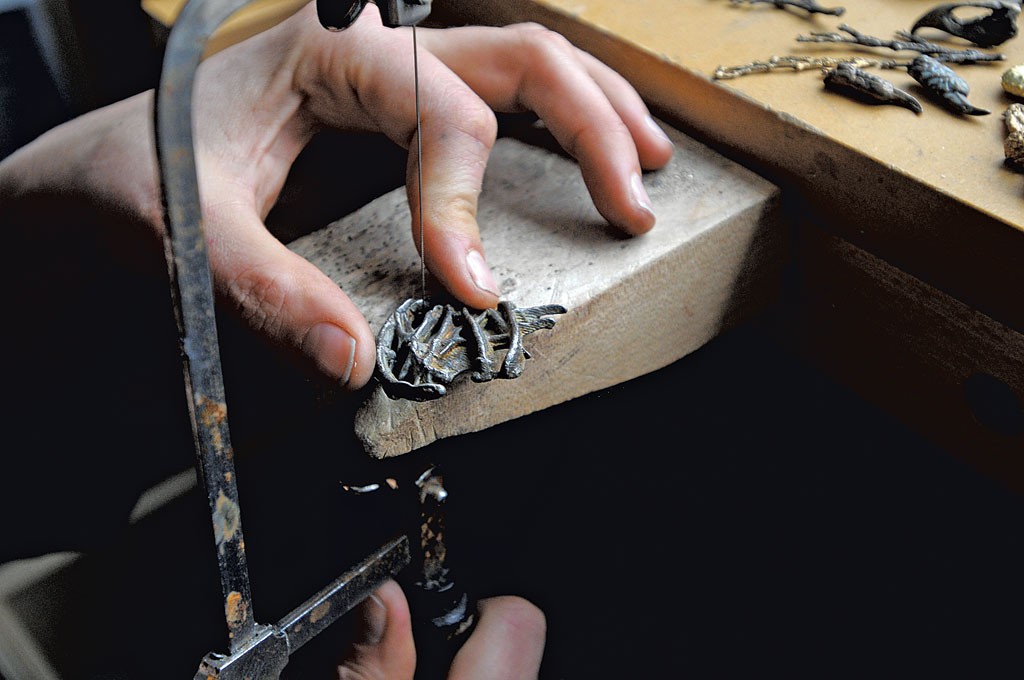 Years later, at UNH, Hopkins initially pursued a degree in biology with a minor in art. Seeking more technical art training, she enrolled at an art school in Florence but found the classes unchallenging. Hopkins says she couldn't see herself pursuing a career in painting or sculpture; aside from the practical constraints of the art market, those mediums "just didn't click," she says. "The forms felt too limiting."

Hopkins quit art school and lived and worked in France for two years — "that's another story," she says enigmatically. "I was just in one of those life black holes, like Oh my God, what am I going to do?" she adds with a laugh.

Then, a chance encounter during a visit to Florence as a tourist put Hopkins on her present path. "I walked by a jewelry school," she explains simply. "And it just completely clicked, [because] once you learn this skill or technique, you can take it anywhere."

At age 27, Hopkins enrolled in a two-year training program in classical jewelry making and design. The versatility of metalworking techniques and the range of influences in jewelry design also appealed to her. "You can make kind of futuristic technical perfection with metal, or you can be primitive and oxidize stuff," she says.

At first, Hopkins found the prospect of making her own designs daunting. Her early work focused on geometric designs and the study of shapes that had "universal" appeal. 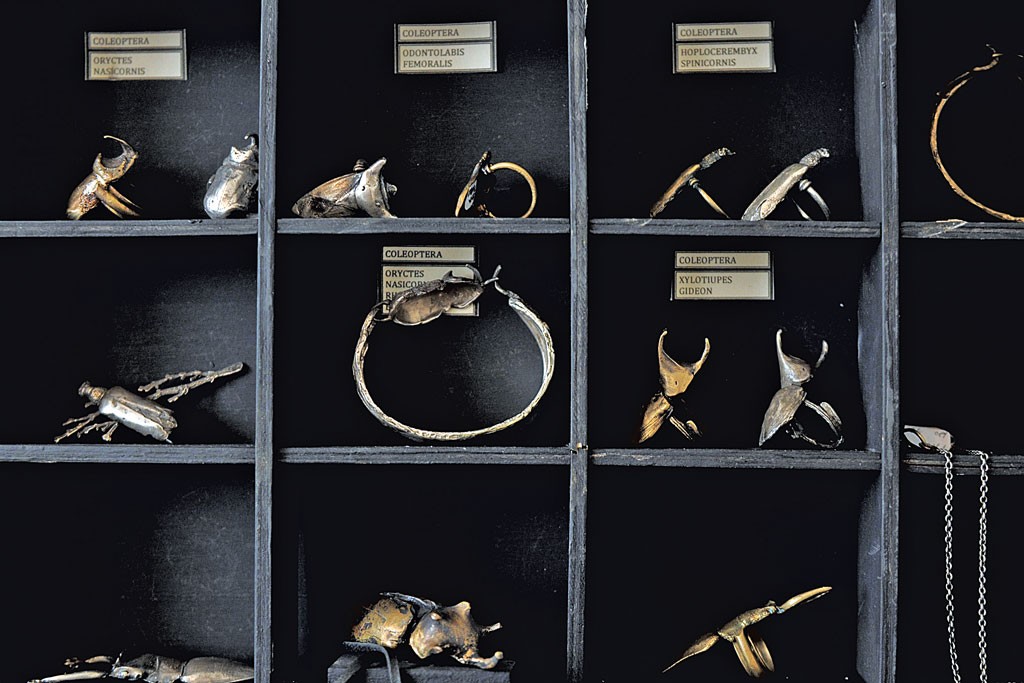 Living in Florence, an epicenter of Renaissance art, she often found inspiration from architectural fixtures and designs. In her last month of school, a professor showed the class a technique of creating molds from split cuttlefish bones and pouring molten metal into them. Hopkins had another lightbulb moment.

"It's incredibly primitive," she explains excitedly, "and your piece comes out all dark and oxidized and gnarly. It looks a thousand years old, or more. I was like, This is what I'm looking for!"

Since then, her designs have stayed in the realm of the natural world. She finds inspiration everywhere: plants and seeds spotted during vacations, research about animals, fossils in museums and leaves from the woods near her home in Norwich. She moved back to the U.S. in 2009 because she'd begun to miss home, and also because of the bureaucracy involved in launching a business as an American in a European Union country. Encouraged by the emerging local art scene, she settled in the Upper Valley and worked initially from a studio in AVA Gallery in Lebanon, N.H. Two years later she opened Scavenger Gallery.

Now the space serves as her studio, a retail store and a gallery for her work and that of other artists. At the moment, brightly colored mixed-media works by Vermont artist David Laro are on the walls. Scavenger also offers a small selection of affordable, artist-made works such as greeting cards and decorated lighters. Hopkins hosts First Friday wine tastings and receptions in the gallery, doing her part to foment the Upper Valley art scene.

"One thing I love and miss about Europe is the [art world] socializing," Hopkins admits. "But it's amazing to see what having this space can do." m

The original print version of this article was headlined "Nature's Bounty"