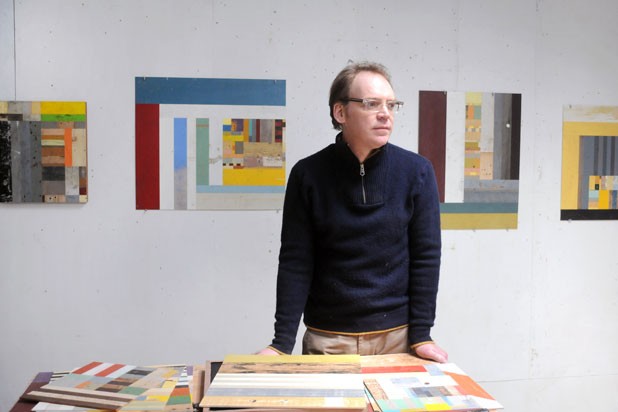 In his West Hartford studio, Duncan Johnson has shelves stacked with painted wooden boards, reclaimed from area building projects and carefully organized by color. On any given day, he’ll pull out a bunch of them, in a variety of hues, and fan them out on his worktable. From there, said the 50-year-old artist during a visit last week, his creative process is simple: Move the wood around and see what happens.

“It’s totally random,” Johnson admitted. “I have my pieces out, and two will bump together.”

If he likes the way they look side by side, he’ll glue them together. He continues until he’s built up a rectilinear composition that feels, as he put it, “present.” Johnson’s job is “just trying to be there for all those little accidents,” he said.

The resulting compositions are gorgeously crafted, two-dimensional wooden “paintings” defined by their serendipitous combinations of color and texture — chipping paint meets wood grain meets the scars of old nail holes. Some of his works seem to riff off traditional quilt patterns — Johnson’s mother is a quilter — but they’re never symmetrical like quilts.

When Burlington’s new Hotel Vermont opens later this spring, northern Vermonters will have a chance to view Johnson’s work closer to home: He’s created a roughly 7-by-11-foot piece that will be a focal point in the hotel lobby.

Their home — perched so close to the White River that the windows offer a boat-like view — took a beating during Tropical Storm Irene. Eight inches of water flooded the studio, and even more water inundated the house. The flood spared Johnson’s work but not his materials. “It was devastating,” he said. It took three months of full-time cleaning and repair, with the help of volunteers, before the couple moved back into the house.

Now the place looks as good as new, but that river keeps rising and falling. “I think about it all the time,” Johnson said.

After graduating in 1987 from Pratt Institute, where he studied photography, Johnson shifted his artistic focus to sculpture. He got a studio in Williamsburg, Brooklyn, and took a part-time job at an art-crating company. “It paid well,” Johnson recalled. But more importantly, he added, “I could use the shop.” In 1992 he started showing his own work — sculptures that often incorporated reclaimed materials from former industrial neighborhoods.

After a decade in Brooklyn, Johnson grew tired of the city. So in 2002 he returned to his home state of Vermont, found work as a carpenter and continued making sculptures, now from branches he gleaned in the woods. It was slow going for about four years.

“Out of frustration, I decided to try something different,” said Johnson. 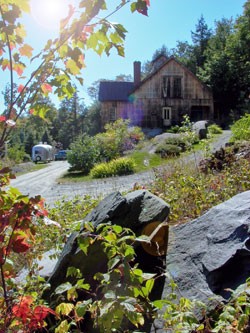 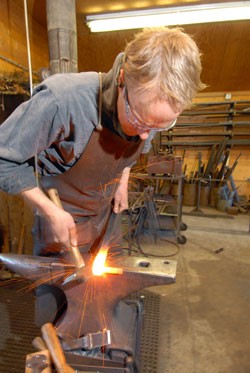 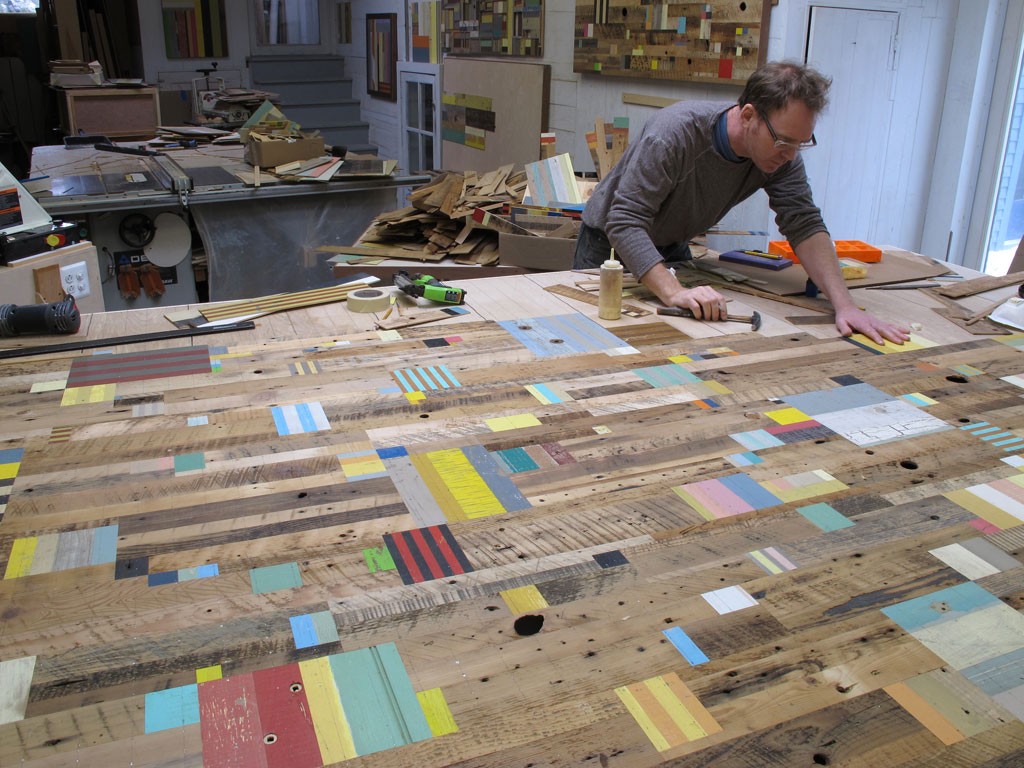 A friend who had an old barn filled with scrap wood and other discarded items invited him to come and forage for materials. Johnson came home with piles of distressed wood and a vision. He cut the wood down to strips of various sizes and assembled them into a “painting.”

To Johnson’s surprise, he had fun with the process. As a sculptor, he said, going two-dimensional “felt like I was cheating.” But he followed his instincts and dived deeper into the concept.

For that first piece, he used unpainted wood and made literal references to the barn it came from, creating mini barn-door-type shapes within the composition. But soon Johnson began to play with color and abstraction.

Many people who look at his work assume Johnson has painted each wooden strip, but all of his pieces are just as he found them. Still, the artist considers that he’s “working with the language of painting.”

At least once a week, Johnson descends on a nearby transfer station, where discarded building scraps are sorted before being taken to the dump, to hunt for more material. “I can find amazing color there,” he explained. Once he’s brought it all back to the studio, Johnson cleans the wood, pulls out any nails, then cuts, rips and sands it down to a workable size.

Recalling his first visit to the Hartford transfer station, Johnson said, “It was a promised land. There was a gigantic pile of wood. It looked like a beaver dam.”

Over time, he’s learned to restrain himself and take home only the materials he needs. Boards painted in red, white or blue are most common. Now, Johnson said, “It has to be a really special red for me to take it home.”

He enjoys the challenge of working with existing color, and he likes how the visible history of each piece of wood provides an “entry point” for viewers. Each nail hole, each weathered surface, each diagonal line where a board once attached to a roof tells a story.

At his studio, Johnson pulled out a slab of natural wood he recently scored at the dump — he uses unpainted material, as well. The weathered board was spattered with nail holes, evidence of its tenure as part of a working barn. Textures like that bring Johnson’s work to life. In addition to using various paint qualities and wood grains, he sometimes draws diagonal graphite lines between nails.

Johnson recently began experimenting with printmaking, using one of his wood constructions to create an alluring black-and-white print. After several years working in two dimensions, this sculptor is still having fun. “I feel like there’s a lot to explore here,” he said. “I’ve just scratched the surface.”

All photos by Sarah Priestap.

The original print version of this article was titled "Happy Accidents"