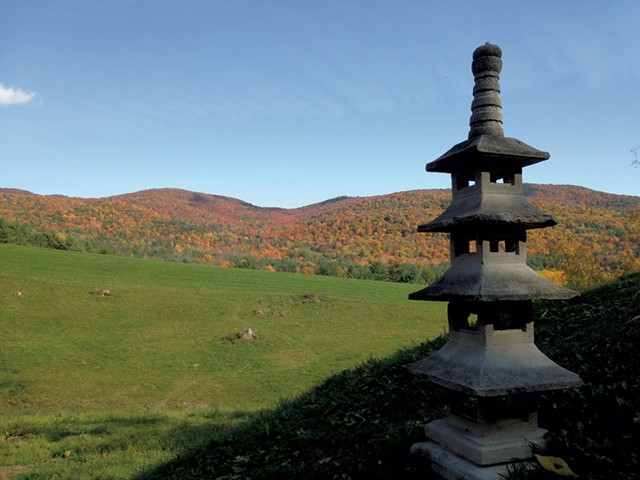 Word to the wise: If you check out Taconic Mountains Ramble State Park, don't wear Chuck Taylors. This is a lesson I learned the hard way on a recent late-morning, um, ramble through Vermont's new state park.

While the 420-acre spread in Hubbardton is serene and spectacular, certain sections — including those that offer access to the most dramatic vistas — require sturdier footwear. Granted, it would also be pretty easy just to spend the day lounging barefoot amid the splendor of the park's meadows, waterfalls and lush, meditative Japanese garden.

Taconic Mountains Ramble opened quietly last fall. The park is open year-round, but off-season visitors have to park on the dirt road beyond the gate and walk in on the half-mile access road — an approach I might recommend even in the summer months.

As you crest the gravel road's final curve, a sweeping panorama of the park's namesake mountain range unfurls like the opening shot of an Alejandro González Iñárritu film. The cinematic quality of this breathtaking scene must have been one of the attractions for the land's previous long-time owner: author and two-time Academy Award-nominated filmmaker Carson "Kit" Davidson, who donated the Ramble to the state last year before his death.

"A lot of people who come here ask to see the mansion," said land manager Alyssa Bennett as we walked toward the ridge that slopes into the park. "Well, there it is," she said, smirking and pointing to the neatly kept single-wide mobile home where she and her 13-year-old dog currently reside.

Bennett explained that, despite their wealth, Davidson and his wife — children's book author Margaret "Mickie" Davidson — viewed their Vermont land as a simple refuge from their hectic urban lives in Greenwich Village. "They were flatlanders," she said. 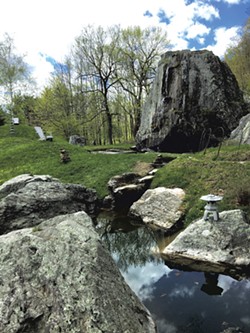 When they began searching for their country getaway, Bennett added, the Davidsons were merely in the market for "a few acres." They ended up with more than 400, purchased from a Hubbardton farmer named Clayton Calvin in 1966 — for $69 an acre. The couple spent the next four decades blazing miles of hiking trails, maintaining wildflower meadows and building the park's most distinctive feature: the Japanese garden.

A foot-worn path runs down a long, gentle slope from the ridge, cutting through a wildflower field that will soon be bursting with color. Descending, you can hear the trickle of waterfalls against a background of chattering birds. When you reach the bottom, the garden unfolds before you like the entrance to a fairy kingdom.

Massive boulders tower above a series of small ponds spanned in several places by arched footbridges. At the southern end, a grassy rise is topped with a stone lantern and an Adirondack chair.

On the garden's opposite end, another Adirondack chair perches on a boulder facing the mountain range. Reaching it entails a harrowing climb over and around a series of rocks and up a weathered wooden ladder. Near the top, you approach the chair from behind, clinging to an especially perilous, narrow section of rock where obvious footholds are few — and, I discovered, slippery. But the reward is otherworldly.

If you can summon the nerve to actually sit in the chair — bolted to the stone, it still feels rickety — you'll be afforded a view you're unlikely to match in any of Vermont's other 50-plus state parks. With the garden some 20 feet below, it almost feels like you're floating as you gaze toward the undulating Taconic Mountains.

Japanese gardens are designed to embody and reflect their surroundings, exhibiting a symmetry with the landscape in which they are embedded. Here, the tall stone faces ringing the garden mimic the cliffs at the apex of the trails that zigzag up Mount Zion, past a series of small waterfalls. The grassy swells evoke the sweeping meadows and rolling mountains in the distance.

According to Bennett, Kit Davidson wasn't a practitioner of Buddhism. But he did take an open, Zen-like approach to his land. While Taconic Mountains Ramble remains to be discovered by most Vermonters, Rutland County locals have enjoyed its wonders for decades.

"He never intended to hoard this for himself," said Bennett. "He always encouraged people to come and enjoy it."

Davidson hired Bennett, who also works part time for the Vermont Fish & Wildlife Department as a small mammal biologist, to manage and begin upgrading the property in 2012. He died last September at age 92, only weeks after the state accepted his plan to donate the land as a park, ensuring that it would be protected from subdivision and development.

On his passing, 204 of the property's 420 acres were granted to the state, with the rest to follow shortly. The remainder of Davidson's wealth will be used to maintain the park, including keeping his protégée Bennett on as manager.

Davidson had only three rules for the hikers, bird-watchers and cross-country skiers who visited his land: no overnights, no fires and no smoking. Those rules remain, and the state will probably add a few more at some point, Bennett said.

As she explained, lands newly acquired by the state are subject to an evaluation period that typically takes a few years. During that time, state employees inventory natural resources and develop plans for infrastructure and use. Future projects at the park will likely include a new parking area and outbuildings with bathrooms. (Right now, only a portable toilet is available.) 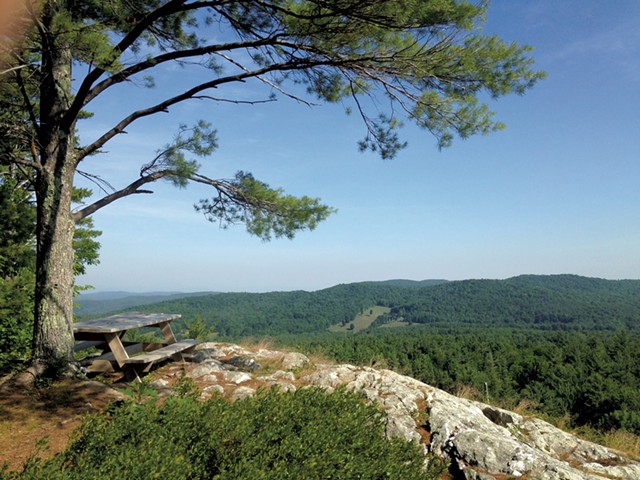 In the meantime, Bennett and Zen philosophy students from nearby Castleton University — whose curriculum includes public-service volunteering — are sprucing up trails for the park's debut summer season. I had time to explore only about half the place, but what I did see was dazzling.

Midway up the Moot Point Trail, which winds behind the garden, you'll find an overlook called Zion Minor. It's a steep climb in places — comparable to the more vertical sections of Mount Philo or Snake Mountain — but the view is even grander there than from the "floating" chair.

Continuing up the Springs Trail, you reach another overlook, Top of the Ridge. The view of the valley from there includes the Hubbardton Battlefield, site of the only Revolutionary War battle fought on Vermont soil. It would be a heck of vantage point to catch the annual reenactment of the conflict (on Saturday, July 8, this year).

Like the storyteller he was, Davidson saved the best for last. A few hundred yards past Top of the Ridge sits another outcropping, Zion Major. The park's highest point, it offers a magnificent finale: To the west, the purple majesty of the far-off Adirondacks frames a 180-degree view of the Taconics in the foreground. You'll also catch sight of Mickie's Elm, a giant — and now rare — elm tree abutting one of the wildflower meadows. Davidson named it for his wife, who predeceased him in 2002.

To descend from Zion Major, you can return the way you came or try the park's most challenging route.

"I told Kit for years that I wouldn't let him name a trail after me," Bennett said, as we pondered the odds of my breaking a leg navigating the steep, narrow trail in my Converse sneakers. "But a few months before he died, he played his trump card: 'You wouldn't deny a dying man, would you?'"

"I agreed, on the condition that it had to be a really tough trail," Bennett continued, pointing to the wooden trail marker. It reads: "Alyssa Trail — Difficult."

The original print version of this article was headlined "Ramble On"