Exploring the Ins and Outs of Polyamory 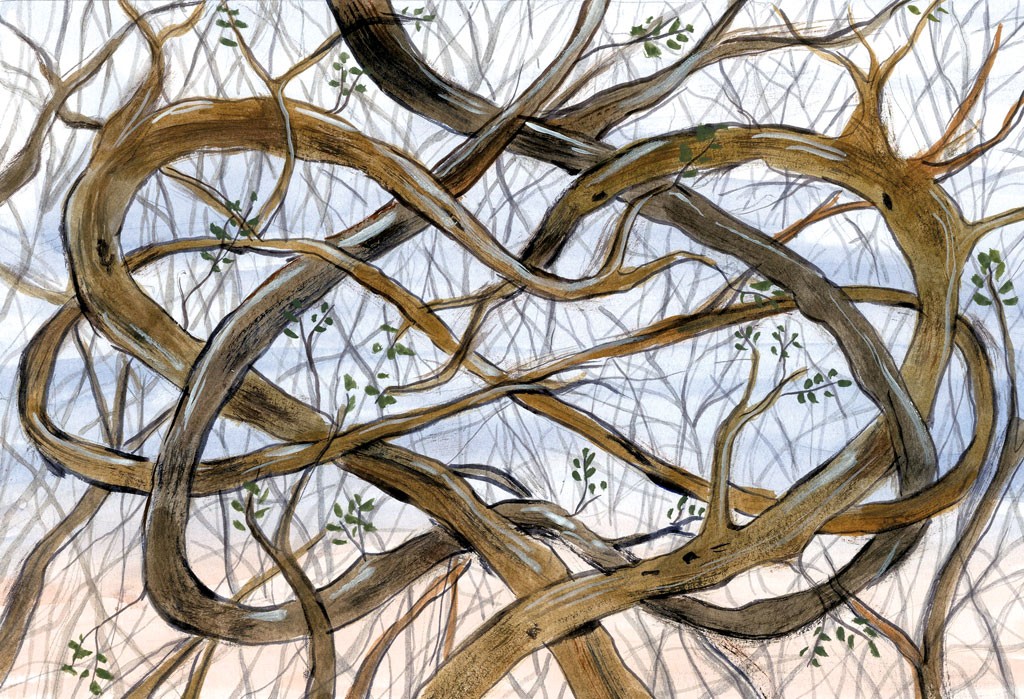 Betsy has a full day ahead of her, even for someone with four romantic partners. An hour after her interview with a reporter, she's due to pick up one of her girlfriends at the airport. Later this afternoon, she'll have a coffee date with a potential fifth partner, followed by dinner and a movie with her "primary partner," Lola, whom she sees three nights a week.

"This is not a typical day," the 60-year-old Burlington grandmother confesses. "Usually, I don't double-book myself like this."

Betsy (who asked that her last name not be revealed) has nothing against monogamous relationships; she was married for 28 years and still would be, she adds, had her husband not died when she was 51. Two years after his death, Betsy began practicing polyamory, or having more than one romantic partner at the same time. Today, she's part of a constellation of intermingled love interests.

But, contrary to what many non-poly people may assume, Betsy insists that polyamory is not synonymous with swinging or open relationships. For her, it requires much deeper emotional connections with her partners. They all know about and consent to her other romantic relationships, as she does to theirs.

"A lot of people think it's just all about sex and having wild parties. In some ways, that's the least of it for me," she says. "I think we all have a lot of love to give and share, and it seems somehow unreasonable to say I'm only going to share that love with one person."

In addition to Lola, with whom Betsy has been "keeping company" for seven years, she has two boyfriends: one in Connecticut, who's married, and another in New Jersey. In fact, the Jersey boyfriend is someone Betsy dated before she was married. Despite her many loves, some of whom she sees only a few times a year, Betsy practices "solo poly," meaning she doesn't cohabitate with any of her partners. Instead, she shares her home with a daughter and granddaughter.

Why would anyone choose to enter such a tangled web of love, especially when simple monogamous relationships are potentially fraught with drama, miscommunication and emotional turbulence?

"For me, it's unrealistic and unreasonable to think that one person is going to be able to meet all my needs," Betsy explains. "So it seems pretty natural to me that you would love more than one person intimately, but you won't do it in exactly the same way with each one."

For Betsy, that means she may go kayaking and cycling with one partner, see movies and have dinner with a second, and attend workshops and weekend retreats with a third. Her sexual intensity with each partner may ebb and flow over time. But what remains constant, she says, is the deep emotional attachment she feels to them all.

"There are so many different kinds of candy out there," she says with a smile. "I'm not gonna eat just one."

Betsy doesn't deny that polyamory presents unique challenges, including something the polyamory community refers to as NRE, or "new relationship energy": that flush of excitement, obsession and lust one feels when finding a new partner. When that occurs, she says, "the green monster," aka jealousy, can rear its head.

"The key to dealing with that is communication and emotional honesty," she says. "You just have to keep talking to each other and say, 'Just because I'm seeing this new person doesn't mean that I love you any less than I did before.'"

Betsy's partner Lola agrees. A 61-year-old book editor and relationship coach who self-identifies as a trans female, Lola first began exploring polyamory as her 25-year marriage ended. Like many formerly monogamous people, Lola initially assumed that polyamory was just about having multiple sex partners — that is, until she met her first poly partner. (Currently, she has two.)

"He was very ethical," Lola says. "And a lot of this is about ethics."

First and foremost, Lola says, polyamory only works if all the partners are honest and transparent with each other. So, if Lola invites Betsy to dinner one night and Betsy already has plans with another partner, Lola expects Betsy to reveal those plans and not make excuses, such as saying she's too tired. "That takes practice," Lola says.

Total honesty also means practicing safety, Lola emphasizes. All the partners must be up-front about whom they're having sex with and who may have contracted a sexually transmitted infection; Lola and Betsy say they get tested annually for STIs. While they don't necessarily share the results on paper, they do inform their partners that everything is A-OK — and expect their partners to do the same.

Betsy and Lola have another rule of engagement: Neither will form an emotional attachment with someone who's cheating. The wife of Betsy's married boyfriend in Connecticut not only knows about her husband's polyamory but consents to it and even considers Betsy her friend. As Betsy puts it, "I don't want to be someone's dirty little secret."

How common is polyamory in Vermont? It's difficult to say. The U.S. Census Bureau doesn't have a box to check for unconventional romances, and even if it did, its numbers would be unlikely to reflect the many shapes and permutations of existing polyamorous relationships. As Lola asks, would the government only count partners who live together? How about those who only see each other once a week or once a year?

Still, there are clues to the practice's popularity. Several Vermonters interviewed for this story belong to a local polyamory email discussion list that claims 100 to 150 members. Similarly, a search of PolyMatchMaker, an online polyamory dating site, turned up 360 people within 100 miles of Burlington — from singles in their twenties to gay and straight couples in their sixties — who are interested or engaged in polyamorous partnerships. Those in the poly community suggest their actual numbers are much higher.

They also say one common misconception they hear from skeptics of their lifestyle is that polyamorous people can't or won't commit to "real" or "healthy" relationships.

"There's still an awful lot of hostility toward this," Lola says. "There's an embedded belief that there's only one way to 'do' relationships, and if you stray from that, you're a social deviant."

Indeed, mainstream society's bias toward binary bonds may explain why so few polyamorous Vermonters are "out" about their multiple love interests, except with trusted family, friends and coworkers.

Such is the case of "Chris" (not her real name), a 46-year-old Chittenden County woman who works in higher education. When Chris began exploring polyamory several years ago, after her marriage ended, she was surprised to learn how many of her colleagues were also polyamorous. She theorizes that the trend may be due to academics' intellectual willingness to challenge societal norms.

For Chris, those norms were instilled early in life. She was raised in a traditional Catholic household that taught her she would find "one true soul mate," get married, have kids and stay together until death.

Chris, who was only 23 when she met her now-ex, stayed married for 20 years but always felt spiritual attachments to other men and women, even though she was never physically unfaithful. Now divorced, Chris has shifted her relationship priorities toward wanting "complete sovereignty in mind, body and spirit." Currently, she has two partners, neither of whom lives with her. Each knows about the other, though they haven't met.

"For me, polyamory doesn't necessarily mean that I'm actually having sex with more than one person," Chris explains. "It means I have the sovereignty to choose if that's where a relationship is going, and that I'm entirely transparent about that."

How do Chris and her partners address the "green monster"?

"If I'm feeling jealous, to me that's an indication that I need to dig deeper to understand why I'm feeling this way," she explains. "It simply prompts me to ask better questions of myself."

As for rules, Chris says she and her partners have just one: "We check in regularly on the status of our connection and make sure that we feed it as well as we can."

The people interviewed for this story give a sense of the variety of forms polyamory can assume. "Charlotte" (not her real name) of Richmond says her polyamorous lifestyle appears conventional to outsiders: She's married to a man, whom she calls her "nesting partner." While neither currently has another partner, she says they have in the past and expect to again.

"The idea of an exclusive relationship that's supposed to last your entire life never made a lot of sense to me," Charlotte says. In her previous marriage, Charlotte loved someone besides her husband. "Nothing ever happened with that, but I was actively suppressing a part of who I was all those years. When I finally discovered the paradigm of polyamory, that really felt like the right fit for me."

What about the challenge of explaining poly relationships to kids? Lola says her grown kids were initially "puzzled by it," and it took them a while to adjust to the concept.

"Now they're more interested in knowing their parents are happy," she says. "And I'm clearly happy."

Is polyamory more practical for empty nesters than for those in the parental trenches of changing diapers and carpooling to soccer games? Charlotte, who's reached the opposite end of the spectrum — she's caring for aging parents — sees clear advantages to having more people in her life who can pitch in when she needs physical and emotional support.

For her part, Chris, who has joint custody of her teenaged son, hasn't broached the subject of her polyamory yet. But she says she plans to before he finds himself pressured into conventional, and often patriarchal, modes of love and relationships without realizing that other paths can work, too.

"I would argue that we are all polyamorous beings already," she suggests. "I love my parents. I love my sibling. I love my son ... So why can't I have that on a [romantic] level? As long as I'm ethical and honest and treat people kindly and wisely."