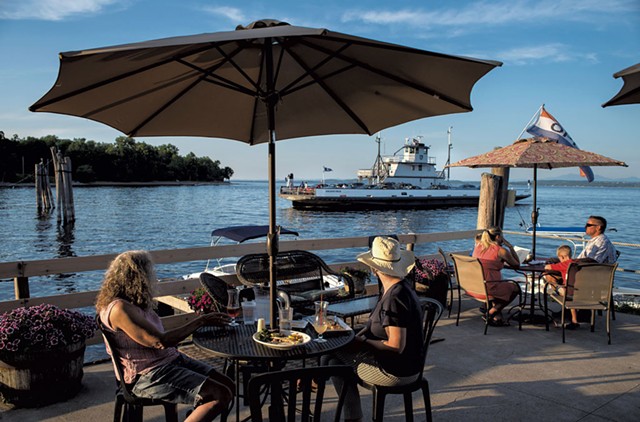 Riding a boat to dinner turns what might have been an ordinary occasion into a special event. For Vermonters who want to dine in the Adirondacks without driving on the far side of Lake Champlain, the first stop is the ferry landing in Charlotte.

Leave your car there and walk aboard the boat for a 20-minute ride that is a beautiful and peaceful way to start an evening. Restaurants in Essex, N.Y., where the boat docks, are an easy walk from the ferry landing.

Traversing the lake, the vessel faces the Adirondacks to the west. As the shore nears, the village of Essex, with its marina, shops, homes and restaurants, comes into view. Looking back toward Vermont, you'll see the horizon filled with familiar shapes: Camel's Hump and Mount Mansfield.

The sky puts on a show of its own, as we saw on two recent excursions to Essex. One night, the crescent moon rose above the lake on our voyage home after dinner. The next evening, pink streaks in the western sky matched the raspberry sorbet cone we got for dessert at the Essex Ice Cream Café.

For more substantial fare, the Old Dock Restaurant & Marina, beside the ferry dock, has a patio on the lake and indoor seating, as well as a 25-slip marina. The night we ate at the restaurant, a seaplane was parked at the neighboring beach.

Also within walking distance is the Essex Inn on the Adirondack Coast. A couple of blocks from the boat landing, it's a farm-to-table restaurant with marble-topped tables on the front porch and a dining room and bar inside.

Don't linger in New York too long: The last boat home to Vermont leaves at 9:30 p.m. But the 8:30 ride is well timed for a midsummer sunset at mid-lake.

Good restaurant service can take many forms, and I witnessed a new one on a recent visit to the Old Dock. Before the server cleared the remains of my friend's first course — a plate of steamed clams — she paused to drop him a hint.

"There's one left in its shell," she told him. Then she waited while he fished out the last crustacean.

Our leisurely meal started with a summery cocktail and ended with sorbet and apple pie à la mode. The side of vegetables served with my trout — summer squash, tomatoes, onions — was lovely. A few kinks along the way, including a Greek flatbread that was missing its chicken and dessert that went MIA for a time, didn't detract from the evening's pleasures.

Some diners arrived in their own boats and parked at a restaurant slip. Others came by ferry. The big boat's coming and going, visible from our lakeside table, was the meal's metronome. Kids played mini-golf and romped by the swings in a play area to one side of the restaurant.

These outdoor amenities are the work of owner Copey Houghton, a Vermonter who purchased the Old Dock business three years ago and is finalizing a deal on the property this summer. Houghton, 57, is the longtime owner of the Daily Planet in downtown Burlington.

But his ties to Essex run deep: His great-grandfather settled a family camp there in 1908, and Houghton has been eating at the Old Dock his whole life. Owning the restaurant, he said, "was always a dream of mine."

Some menu items hark back to Houghton's earliest days making food for others. As a young teen in Charlotte, he operated a catering business that served burgers and chicken from the grill with sides of salad. The Old Dock offers sandwiches and burgers, as well as entrées such as lobster, lamb and steak. Houghton's menu has less fried food than his predecessor's, he said, and uses vegetables grown at a friend's garden and beef from South Farm, former New York governor George Pataki's farm in Essex.

The night we dined at the Old Dock, Leah Chiofaro of Essex, Vt., arrived by boat for dinner with her extended family. Her passengers included two dogs wearing life jackets who hung out in the boat while the family ate. Chiofaro, owner of Hydrangea Too on College Street in Burlington, had a burger and fries.

"I've been boating on the lake close to 20 years," she said in an interview later. "Let's put it this way: You can't pick a better backdrop, a better atmosphere, for dinner than being right on the lake." Her trip back to Perkins Pier in Burlington took about 20 minutes at "full speed," she noted.

"It was beautiful and calm that night," Chiofaro said. "Being able to watch the sunset is just fantastic. You can't really get a better view than that."

Essex Inn on the Adirondack Coast

The enticing smell of barbecue wafted through the village as we disembarked from the ferry. We followed it a couple of blocks south and found its source: the Monday night barbecue at the Essex Inn.

Executive chef Jordan Sauter prepares the informal meal on summer Mondays. Several choices were available the evening we visited: cheeseburgers, grilled veggies, grilled salmon and pulled pork. For $15, each came with sides of coleslaw and potato salad that were made from ingredients grown and purchased at nearby farms. The meat was also locally raised, Sauter told me, including pork from Mace Chasm Farm & Butcher Shop in Keeseville, N.Y.

I chose pulled pork, and it was excellent — smoky, flavorful, tender and plentiful. My daughter, not a fan of coleslaw, gobbled up Sauter's mayo-free version. With the grilled bun that came on the side, I made a sandwich of pork and slaw and still had some of each for extra eating.

We ate our picnicky meal in two places: My daughter and her friend chose the air-conditioned bar. My cousin and I preferred the evening air and sat on the front porch, where his dog joined us. A server graciously set a bowl of water in front of Arlo and stepped around him as she served outside diners.

The Monday night meals are an end-of-the-week break in routine for Sauter, who prepares multicourse dinners Thursday through Sunday. On those nights, crafting a menu that changes by the week, he makes dishes such as housemade burrata with heirloom tomatoes and olive oil; veal cotechino with poached egg, lentils and house Dijon; and housemade ramp fettuccine (with ramps he harvests himself), served with spicy lamb ragout and golden raisins.

"It's an ideal situation for a chef," said Sauter, 33, of his gig at the Essex Inn, where he's worked for two years, "rather than me waiting on a truck with vegetables in a box that have no attachment to anything."

He begins his week by making the rounds at local farms, where he purchases (and sometimes picks) food for the coming week. Back in the restaurant kitchen, Sauter starts his prep by making bread dough.

If diners appreciate the atmosphere and scenery of Essex, so does the chef, who moved from Philadelphia to the Adirondacks with his wife and young sons.

"I can walk out the kitchen door and see the lake," he said. "I can see you guys over there in Vermont. Compared to what I was used to — walking out back into an alleyway with dumpsters in it — this is a very welcome change. It's beautiful."