The Birds of Vermont Museum in Huntington is a fascinating, if somewhat curious, place; tour guides often list it as a "hidden gem" or a "must-see." Such descriptors do apply to this one-of-a-kind museum in an out-of-the-way location, but there's another light in which to view it. Birds of Vermont is devoted to the works of a single artist, Bob Spear.

A cofounder of the museum, Spear is responsible for most of its 500-plus sculptures of the state's avian fauna. Yes, sculptures — though the museum's word, "carvings," may seem more apt. There's a fine line between craft and art, and who's to say where it's drawn? Spear himself appears uncomfortable with being called an artist, and he doesn't consider his wood works to be fine art. Yet these incredibly lifelike birds suggest he's not giving himself enough credit.

Then again, words have never come easily to Spear, and that's particularly true of late. Just a few weeks shy of his 94th birthday, he's facing health issues that limit his mobility and communication. Spear has gradually stepped away from his supervisory role at the museum and now rarely works in the woodshop adjacent to the main gallery. Half-finished wooden geese on the counter patiently await his attention.

Spear's eyes are still lively and sharp, though. During a recent interview with Seven Days, he found conversation difficult but snapped to attention when a ruffed grouse appeared under the birdfeeders in the museum's side yard. Whether or not Spear talks about his work or his museum, a visitor can learn something about Vermont's birds just sitting by a window with him.

And his sculptures speak for themselves. The birds are carved with such delicate detail, and painted with such fine brushstrokes, that at first glance they resemble taxidermy specimens. In fact, as Spear explains in a video introduction to his work made in 1998, he believes you can learn more about a bird from studying a realistic carving than from observing a dead, stuffed creature.

Spear has mainly relied on photographs to get an accurate sense of birds' coloring and proportions, though he has occasionally used "study skins" — aka the bodies of birds that have been, as Nabokov put it in Pale Fire, "slain by the false azure in the windowpane." The life-size sculptures are carved from basswood. Many are carved from a single block, but larger birds — such as the raptors that hang from the gallery's ceiling and the giant turkey downstairs — require multiple pieces, seamlessly joined.

The realism of these wooden birds is due in part to Spear's careful use of a fine-tipped woodburner, with which he traces the lines of every single feather. The figures are arranged in natural poses: pursuing a moth, emitting a mating call or swooping down for prey with talons outstretched.

While Spear's sculptures don't necessarily encourage viewers to speculate on the nature of art and artifice, it's not inappropriate to view them in the context of other hyperrealistic art, such as the paintings of Chuck Close or Richard Estes. They genuinely do pose questions about the boundaries between life and art.

Adding to their realism is the sculptures' presentation at the museum. Most of them reside in glass cases amid equally realistic foliage, which Spear and other artisans have also made by hand. The carefully trimmed and painted leaves — many of them cut from aluminum pie tins — once even fooled a visiting botanist. 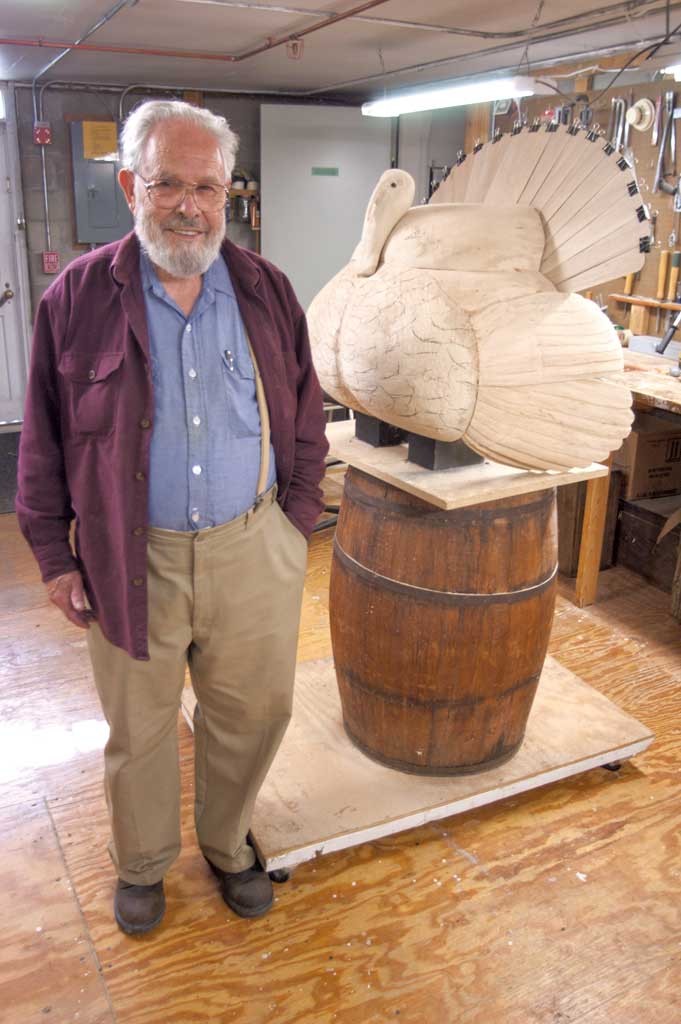 Things slow down at Birds of Vermont in the winter months, when visits must be arranged by appointment, but warmer weather brings a slew of schoolchildren, who go on field trips to learn about wildlife as well as Spear's artistic methods. The museum does have an educational component, but, above all, it is dedicated to conservation. That's "the underlying theme of all of Bob's life's work," says executive director Erin Talmage. "Often the first step in conservation is learning what you're conserving. The carvings are a fantastic tool to show that."

Talmage is one of several people making efforts to ensure that Spear's work and legacy will be preserved. She started volunteering with the museum in 1994, while still in graduate school. Now a professional biologist with a keen interest in birds, Talmage came to work full time at Birds of Vermont in 2003.

Another member of the museum's close-knit circle is Shirley Johnson, president since 2007 of the nonprofit's board of directors. She's known Spear since 1972, when he was director of the Green Mountain Audubon Center. "He could have sold a lot of these carvings," says Johnson, "but he wanted to make [the museum] an educational exhibit. It's a combination of art and education and natural history, all rolled into one."

Both women are sensitive to the issues posed by Spear's advanced age. Talmage sounds wistful when she mentions projects he's spoken of but not executed, including carving all of Vermont's butterflies, reptiles and amphibians. "The time is coming," she writes in an email, "when the only way we will hear [Spear's] voice will not be from him directly but only through his art."

Johnson and Talmage keep the museum going. Gale Lawrence, Spear's life partner and cofounder of the museum, keeps him going. She helps him get around, communicates with him and for him, and acts as a link between the artist and the museum.

To most questions Seven Days poses during an interview with him, Spear's answers are terse and evasive, though polite: "Never thought about it." "Don't really remember." "Can't think of anything offhand."

Such responses are "so classically Bob," Lawrence says with a wry laugh.

"Just think, Bob," she says to him, "if you hadn't met me, nobody would know anything about you."

Spear might like it that way, but the devoted people around him — along with the hundreds of birds he's made — offer a richer story.