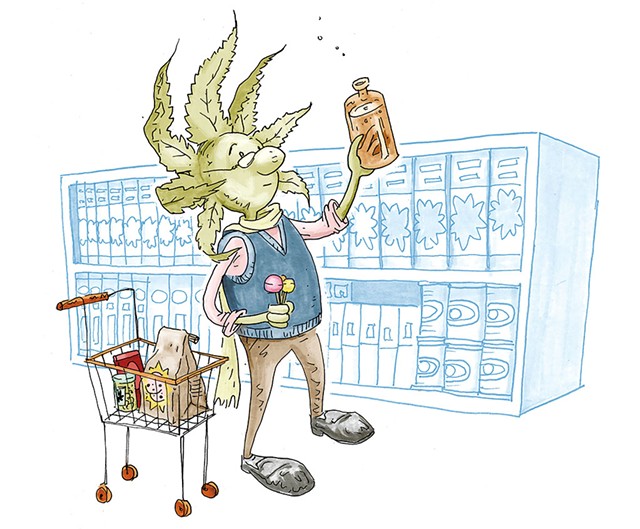 The legal has landed. Adult Vermonters will soon be allowed to smoke pot at home with as much impunity as they can crack a beer or sip a Chardonnay. This week, Gov. Phil Scott is expected to sign into law a bill allowing people 21 and older to possess up to an ounce of marijuana and to grow up to two mature and four immature pot plants. Vermont will become the ninth state, along with the District of Columbia, to legalize it and the first to do so through its legislature rather than by ballot initiative.

So now what? As Vermont transitions from an unregulated to a regulated cannabis environment — the law, set to take effect July 1, includes no provision for its sale or distribution — public health experts must shift gears from opposing legalization to minimizing its negative consequences.

Charged with leading the harm-reduction effort is the Vermont Department of Health. In an interview last week, state Health Commissioner Dr. Mark Levine said that his department will continue to resist efforts to legalize retail sales of recreational weed and cannabis-infused products. As he put it, "We're not just going to throw in the towel, by any means."

Still, Levine acknowledged that it would be naïve and pointless for his department to take an abstinence-only approach to cannabis education. The health department is already developing cannabis-prevention campaigns that target populations at greatest risk of harm: children, teens, young adults up to age 25, pregnant and nursing mothers, and people with a history of substance abuse and/or mental health issues. Other public messaging will focus on the dangers of stoned driving.

For the thousands of Vermonters who choose to use recreationally, what will the equivalent of a "drink responsibly" campaign for cannabis look like? "Toke thoughtfully"? "Warning: Objects may appear more edible than they are"?

In short, what are the safest ways to get high?

"This is very challenging," Levine admitted. Unlike tobacco and alcohol, he said, which have generated years of data on the causal links between chronic use and adverse health consequences, marijuana's federal status as a Schedule I drug has restricted comparable research.

"With cannabis," Levine said, "we really don't have much to go on."

The dearth of peer-reviewed science notwithstanding, Levine and other local physicians were asked to weigh in on the healthiest ways to consume. We wanted to know: Are cannabis-infused products, such as edibles, safer or more dangerous than inhaled weed? Is vaping pot healthier than smoking it? Are products with high concentrations of tetrahydrocannabinol, or THC — the primary psychoactive compound in cannabis — safer because users consume less? Or do they increase users' tolerance to the drug?

While wading into the weeds, we also asked questions that stoners have long debated: Are pipes and bongs safer than rolling papers? Are matches healthier than lighters? And does holding a hit longer get you more baked — or just gunk up your lungs with harmful chemicals? Yes, we went there, too.

It's no secret that smoking weed is by far the most common way to get high, at least in states where marijuana remains illegal. However, in regulated markets such as Colorado and Washington, many consumers prefer THC-infused edibles, oils and tinctures. What do health experts say about their relative risks and benefits?

At the health department, Levine was highly critical of edibles due to the inherent danger of accidental ingestion by children. Since Colorado legalized, he noted, the state has seen a spike in emergency room visits by minors who accidentally ate cannabis products packaged as candies or baked goods, as well as more ER visits by adults who consumed more than they'd intended.

As Levine also pointed out, many people don't realize that, compared to inhaled pot, edibles have a delayed onset — from 30 minutes to several hours — and a longer duration. Both, he explained, increase the likelihood of accidental overconsumption, impaired driving and workplace accidents.

John Hughes is a professor of psychiatry and psychology at the University of Vermont College of Medicine and associate director of the UVM Tobacco Center on Regulatory Science. He suggested that edibles are safer than inhaled cannabis because they don't create lung problems. "Plus, they tend to have [lower] THC concentrations," Hughes added.

"Although it's very hard to kill yourself with a THC overdose," he said — indeed, no such cases have been documented — "intoxicated kids can fall, walk in front of moving cars, etc."

"Oral delivery" is the healthier method, according to Dr. Kalev Freeman, assistant professor and director of emergency medicine research at the UVM College of Medicine. Freeman — who also teaches pharmacology and serves as medical director of the Vermont Patients Alliance, Montpelier's nonprofit medical marijuana dispensary — suggested that if and when Vermont legalizes the retail sale of recreational cannabis, he'd prefer to see ingested products sold as single-dose pills, capsules or lozenges rather than as foods, candies or beverages that may appeal to children.

Such products are unlikely to become legal in Vermont this year. If and when they do, however, experts point to advice offered by health departments in Colorado and California as well as the Canadian Nurses Association: "Start low and go slow." Begin with a 10-milligram dose and wait at least two hours before eating more.

For the uninitiated, a vaporizer is an electrical device that activates the THC in cannabis by heating it to below its combustion temperature. The user then inhales the THC-infused vapor to get a hit.

How does vaping weed compare to smoking it? Michael Siegel, a physician and professor of community health sciences at the Boston University School of Public Health, worked for two years in the U.S. Centers for Disease Control and Prevention Office on Smoking and Health. He was also an expert witness for plaintiffs in major lawsuits against Big Tobacco.

Despite his anti-tobacco credentials, Siegel is actually a proponent of e-cigarettes as a way to get smokers to quit or reduce the harm of their tobacco use. In an email, he said he sees a "clear parallel" between the advantages of using e-cigarettes and vaping cannabis.

"There's no question that inhaling the smoke from the combustion of marijuana is much more dangerous than inhaling vapor from heated marijuana," Siegel wrote. "People tend not to realize it, but there are several thousand chemicals in marijuana smoke and many of them are the same chemicals present in tobacco smoke."

Exactly how harmful is smoked weed? Most medical experts agree that pot smoke can increase the frequency and duration of chronic bronchitis and exacerbate other respiratory problems. But even health commissioner Levine conceded, "It probably won't cause lung cancer, like tobacco does, or some of the other adverse effects of tobacco."

Siegel noted that causal links between pot smoke and cancer are foggy at best. As he put it, "The data are too limited at the present time to draw a definitive conclusion either way."

In coming months, Vermonters are likely to hear the refrain: "This isn't your father's reefer." Depending on whom you ask, today's cannabis is five to 20 times more potent than that of 30 years ago. The baby boomers' Colombian Gold had nothing on the millennials' Strawberry Cough.

Now, cannabis strains are as varied as the offerings in a high-end wine shop and are marketed according to their genetic pedigrees, cannabinoid profiles and characteristic highs (e.g., energetic, euphoric, creative, munchies inducing).

With the advent of more robust strains, medical and recreational dispensaries typically offer a wider range of products, including smokable waxes, oils and dabs, which contain more potent THC concentrations than the traditional cannabis flower. Unless or until Vermont legalizes retail dispensaries, such products are unlikely to find widespread use in the Green Mountain State.

Still, public health professionals warn about high-THC products' unintended health consequences, noting that they're more likely to impair memory and trigger cannabis-induced psychoses and paranoia. According to Hughes, high-THC strains are also associated with increased incidence of cannabis-use disorder, especially in young people. In short, they're not recommended for inexperienced or casual users.

Lighters or Matches? Pipes or Papers?

Local medical experts declined to weigh in on the relative merits of smoking out of a pipe, bong or joint — or whether it's healthier to strike a match or flick a Bic.

For such outside-the-mainstream queries, we turned to Connecticut author Mark Braunstein, a paraplegic who described his cannabis use as "medicinal for below the waist and recreational above." In his 2016 piece "10 Ways to Reduce the Health Risks of Smoking Pot," Braunstein advised against using lighters, because burning butane is far more toxic than cannabis smoke.

"Matches are potentially safer if you patiently wait for the flaming sulfur tip to burn out before you hold the match to your bud," he wrote. "In practice, however, you inhale the burning sulfur when you strike the match. If you are smelling it, then you are breathing it."

His advice: Use a match or lighter to light not your pipe or joint but a candle, then ignite toothpicks as needed. Braunstein's research also found that pipes are the healthier option over rolling papers, whose combustion only adds more toxins to the mix.

Finally, are you waiting to exhale? One intriguingly titled study, "Breathhold Duration and Response to Marijuana Smoke," from the University of Chicago Pritzker School of Medicine, found that holding the hit for extended periods only exposes the lungs to more tar, carbon monoxide and other toxic nastiness but doesn't improve the users' high. So, don't hold your breath.

The University of Vermont offers a Professional Certificate in Cannabis Science and Medicine, continuing medical education for professionals working with cannabis, and free webinars for the public on current cannabis science and business. More information and access to the webinars are available at learn.uvm.edu/program/cannabis-science-and-medicine.

The original print version of this article was headlined "Burning Questions"