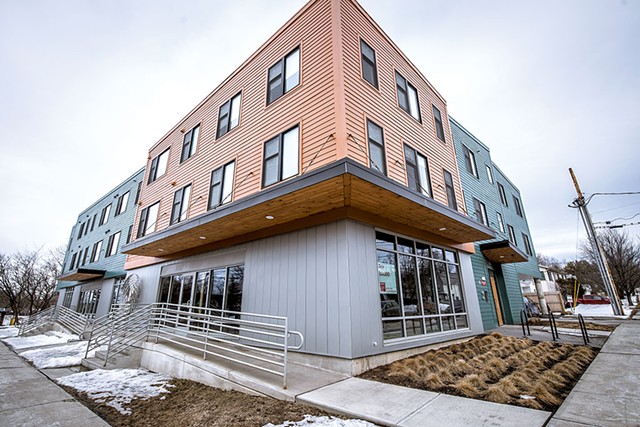 Keith Porter had a feeling his Burlington apartment was colder than it should be. So he started measuring the temperature of his bathroom floor. The results confirmed why his toes were numb: It was 45 degrees on three different December days. He got a "heating" bill soon after for nearly $150.

Porter is one of at least eight dissatisfied tenants in the 30-unit Redstone building on the corner where the Pine Street Deli used to be. On January 29, Porter started knocking on the doors of his second-floor neighbors. The response he heard over and over again? "I thought we were the only ones" having problems, he recalled.

In addition to the heating and insulation issues, residents have lodged complaints about poorly installed windows, noise, building vibrations, inconsistencies with the hot water and sluggishness on the part of the landlord in addressing those concerns. It's gotten so bad that at least two tenants have broken their leases in order to get out. Others say they plan to leave once they find new digs.

"In aggregate, it's clear it's a problem with the building," Porter said.

Despite those issues, residents recently learned that rents are going up this June — one year after the place opened.

The apartments were built to provide much-needed housing in Burlington's South End. Redstone proposed the project in early 2016 and secured the necessary permits from the city later that year.

Within two years, the new apartment building opened its doors.

Rents for the studio, one-bedroom and two-bedroom apartments billed as energy efficient start at about $1,200 a month. The city's inclusionary zoning policy required that four units remain "affordable," available to those who make less than 65 percent of the area median income. A commercial space, yet to be rented, occupies the ground floor of the three-story building.

At the grand opening last summer, the developers and officials touted it as the first privately built new apartments in the South End in 20 years.

"We need more housing for people of all backgrounds, incomes and ages, including more projects like this, if we are going to make progress on the acute housing needs in our city," Mayor Miro Weinberger said at the time.

The honeymoon didn't last. Within the first week, Porter said, residents reported that the main door to the building didn't lock and the windows didn't seem to be installed properly. When the cold weather arrived, Porter felt drafts and once found water pooling on the floor, which may have leaked in through a sealed window.

Redstone eventually fixed the door — but not until mid-February, according to emails Porter provided to Seven Days. They still haven't figured out where the water came from, according to Porter.

During a cold snap in January, the building's heat stopped working for 36 hours, Porter and other residents said. Around the same time, pipes in the laundry room froze, though that's since been repaired. Erik Hoekstra, managing partner at Redstone, confirmed Porter's version of events and said he's working hard to address the building's shortcomings.

At least four other residents also complained of heating problems. "If you're going to charge a premium rate, I would expect things like insulation," said Josh Pierson, a student and a bartender. Pierson said he's not going to renew his lease when it expires this summer.

Another resident said he had to move his bookshelves away from the walls in his apartment because items would fall off them every time someone walked up the stairs.

Of eight residents who agreed to speak with Seven Days, three said they wouldn't renew their leases; three are trying to leave before their leases expire; and the other two hadn't yet decided what to do.

Two additional tenants have already moved out, according to Porter.

The level of "frustration is high," said Justine Lefin. She said she hadn't experienced as many problems as Porter but doesn't want to pay the high rent for another year and will leave when her lease expires. Redstone hasn't "been as diligent" in responding to concerns as Lefin would have liked, she said.

Porter put it more forcefully: "They haven't taken responsibility; they haven't acknowledged anything; they've been miserable to work with," he said.

Redstone officials disputed that characterization, saying the company has taken action. Hoekstra said he asked a team of contractors, vendors, material suppliers and energy-efficiency consultants to look into the complaints last month.

"There was a very extensive investigation," Hoekstra said, adding that he didn't yet have the results.

According to emails from December, Redstone employees said that they had put new gaskets in the windows, done a "significant amount of insulating and sealing," and planned to "fully insulate" the area under the floor in the future.

Hoekstra acknowledged some "unexpected challenges" — especially with heating and cooling — and said the company had trouble with the windows. He said he didn't know whether the problem was the installation or the windows themselves.

Sometimes, Hoekstra said, a recent construction project settles or the insulation becomes compacted, leaving a gap for cold air to enter. He coined it "new-building syndrome."

"All new buildings have a break-in period ... Over the course of the first year or two, you learn things that need tweaking and need refinement," Hoekstra said. "There are no fundamental flaws."

Weinberger agreed, citing his own past experience as a housing developer. "It's pretty common for a new building to have some defects that arise in the first year," the mayor said.

But another Burlington housing developer, Eric Farrell, said he'd never heard of "new-building syndrome" or anything similar. Nor had he experienced it, he added.

"It's not unusual after people are living there, you find out this outlet doesn't work or something like that," Farrell said of his projects, which include the 740-unit Cambrian Rise on North Avenue. "They're usually little things if you do a good" job checking beforehand.

Redstone has taken some steps to ease the pain for residents. The company credited several for their heating bills and allowed at least two residents to move out early, waiving the penalty for breaking the lease. In Porter's case, the company covered January's rent, plus $100 a month for heat. "Probably because I'm a pain in the ass," quipped Porter, who said some of the problems persist.

Hoekstra wasn't shocked to hear that some residents want out, saying there's more turnover in new buildings, too, as certain tenants "move in and decide it's not a good fit." But he admitted that there have been more issues in this building than in the 10 others Redstone has constructed in Burlington, Winooski and South Burlington.

"We're all surprised and puzzled by some of the things that are going on," Hoekstra said.

The building's currently under warranty, so the builder and other contractors are on the hook for some of the repairs, he said. But "we're the building owner, so we accept responsibility in making it right," Hoekstra added.

Despite residents' concerns, Redstone doesn't seem to have violated any city laws. The complex passed the initial city code inspection on May 31, 2018, as well as its building inspection.

Burlington's code enforcement director, Bill Ward, said that inspector Kim Ianelli responded to complaints about the lack of heat. She didn't find any violations, but she left the case open because "she's looking for more information," Ward said.

Seven Days attempted to contact Ianelli, who was on vacation.

Representatives from Snyder Homes did not respond to requests for comment.

"It sounds like Redstone is taking the steps they need to mitigate the issues," said the mayor. He encouraged the tenants at 316 Flynn to contact Ward and Ianelli about any continuing problems in the building.

He insisted Burlingtonians are better off with more housing. "Those 30 new homes put a lot of pressure on landlords to do a better job taking care of their tenants," he said.

Redstone's next project is an apartment complex at the south end of Lakeview Terrace. Although it's built into a cliff, Hoekstra said he's "not at all" worried. Construction challenges, he added, come "with the territory."