Does the universal trespass policy stop crime -- or cross the line? 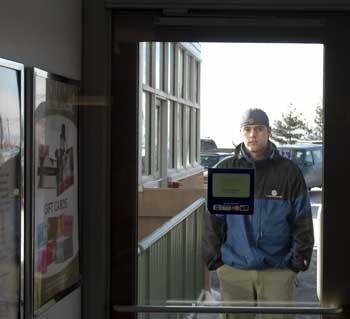 Alex Nief was never convicted of a crime, but for one year, he was treated like a criminal. On January 3, 2004, the 25-year-old Burlington musician was banned from 87 businesses on Church Street, including the entire Burlington Town Center, for 12 months. That meant no morning coffee at Uncommon Grounds, no lunches at Halvorson's, and no buying guitar strings at Vermont Folk Instruments. If Nief cut through the mall to the city parking garage on Cherry Street or even used its public bathrooms, he was subject to arrest for criminal trespass. All because of an argument he had with a former boss -- and a long-standing policy of the Church Street Marketplace.

Nief's troubles began last winter while he was working as a counter clerk at Filene's department store. After discovering an error on his paycheck, he got into an argument with his boss, which soon escalated into a heated exchange. Nief was asked to leave the store. When he refused, the store's security called the police, who again asked Nief to go. But Nief stood his ground and was arrested, led away in handcuffs, and issued a citation for unlawful trespass.

Nief later sued Filene's to recover his back wages, and won. Several months later, the prosecutor dropped the criminal charges against him and the case was dismissed. Nief was off the hook. Or so he thought.

But as Nief left court, his public defender warned him not to enter any of the businesses that were listed on his trespass warning. Apparently, Filene's is one of several dozen retailers that participate in the "universal trespass" policy. Adopted about five years ago by the Church Street Marketplace and the Burlington Police Department, that policy extends a criminal trespass order to all participating businesses. In effect, if you sin against one establishment, you've sinned against them all, and they don't want you there.

"When she told me this, it went from silly to bizarre," Nief recalls. "That's when it hit me -- I'm going to spend the rest of the year banned from half of Burlington. And all the part-time jobs I've had have been at that location."

Supporters of the universal trespass policy say it's been an effective tool for reducing petty crimes and minor disturbances, primarily shoplifting and disorderly conduct. (A similar program exists for participating bars, restaurants and taverns.) They say it has cut down on the number of repeat offenders they have to contend with, while also serving as a powerful deterrent to would-be thieves and troublemakers. In fact, the program has attracted so much interest that, several weeks ago, the BPD sent letters to dozens of other downtown retailers, restaurants and bars not on Church Street, inviting them to join, too.

Not everyone is sold on the idea. Opponents of the policy, including some Church Street merchants, say it raises troubling constitutional questions and may unfairly punish people like Nief who have a legitimate beef with a business owner. Others fear that it could be used to discriminate against people of color, the homeless, the mentally ill or others.

But supporters of the program counter that Nief's case is atypical. By and large, they say, anyone whose name is on the universal trespass list -- about 100 people, according to the Burlington police -- has probably committed a crime and isn't wanted in their establishments. They also point out that the program is voluntary. Even businesses that participate are still free to admit anyone they like into their establishments, regardless of whether they're on "the list." Finally, as many proprietors remind their customers, they reserve the right to refuse service to anyone.

Today, Nief readily admits that he could have found a better way of resolving the dispute with his former employer. Still, he thinks he was unfairly punished by a policy that is draconian and capricious.

For months, Nief tried getting his name off the list. Currently, however, there is no appeals process. The only recourse is if the business that originally requested the trespass order rescinds it, but Nief's letter to Filene's went unanswered. So he decided to find out how the program works and what its participants knew about it.

Participating businesses have no way of knowing if a customer is on the banned list. The police department and the Church Street Marketplace (the agencies that oversee the program for retailers and bars, respectively) don't circulate the names, photos or physical descriptions of offenders. Moreover, many merchants didn't even know they could let anyone they like into their stores, even people who are banned. Others had no idea how the program works or didn't even bother to tell their managers or employees about it.

Norm Campo, owner of the Champlain Valley Clothing Company, recently signed up for the universal trespass program again. He says he thinks it might do some good -- but isn't sure how. "I think it's a great idea in theory," he says. "But there's no way to enforce it."

His manager, Kalen Wolfe, agrees. "How are we supposed to know who to stop if we don't even have a list of names, pictures or descriptions?" she says.

Yves Bradley, owner of the Body Shop and a member of the Burlington Police Commission, supports the program. He says it works well in a small business district like the Marketplace, where the shopkeepers all get to know the usual suspects and where word spreads quickly if someone starts trouble. He sees the universal trespass as a punishment that fits the crime.

"If someone writes me a bad check for $99, I can't do anything about it," Bradley says. "If someone steals from me, about the best I can do is get a trespass order. If it weren't in place, there also wouldn't be a hell of a lot of impetus for [an offender] to say, 'You know, I should really turn my act around.'"

Some businesses, however, aren't sold on the program. Among them is the Burlington Peace & Justice Center Store. Co-manager Jennifer Reay says the store has been the target of shoplifters. And its overtly political material has made it a target for graffiti, vandalism and angry visitors shouting at employees.

Nevertheless, she says her staff decided that the universal trespass program wasn't consistent with the spirit of the Peace & Justice Center. "We kind of had a weird feeling about it," Reay says. "It gave us the heebie-jeebies and felt kind of Big Brotherish."

Interestingly, the universal trespass program isn't citywide -- it's only for businesses on Church Street and surrounding blocks. Nor was it adopted by the Burlington City Council. It didn't need to be, according to City Attorney Joe McNeil. He explains that the police are simply enforcing a state law that was already on the books. In fact, several weeks ago the police department asked the city attorney whether the policy raises any legal or constitutional questions.

"Our answer was, we don't think so," McNeil says. "We don't see a substantive difference between an order issued by one merchant affecting them all, as opposed to 70 merchants putting out a similar order. In either case, the authority to do this comes from state statute."

Others aren't so sure. Lisa Barrett, a Burlington attorney with the Vermont Legal Services Law Line, considers the policy constitutionally questionable. "I think it's really offensive and discriminatory," she says. "I have real questions about people's civil rights in this situation."

Vermont law expressly prohibits discrimination in public accommodations, she explains, even when those accommodations are privately owned. Although Barrett doesn't know of any cases in which the policy has been used to discriminate based on race, sexual orientation or disability, "I worry about this being used simply to keep people who are different off of Church Street," she says.

Barrett believes the policy becomes more problematic if it's adopted by businesses that provide necessities such as groceries and prescription drugs, especially if they cannot be found at other nearby locations. City Market, the only supermarket in downtown Burlington, doesn't participate in the program, and a spokesperson for the food co-op says it has no plans to join. However, Brooks Pharmacy does participate.

Others warn that the universal trespass policy could create more problems for businesses than it solves. Attorney Beth Robinson, a co-counsel in the landmark Baker case that led to Vermont's civil-union law, says it raises potential liability concerns for business owners, since they are abdicating to someone else the decision about who gets banned from their establishments. She says that if the reason for that ban is later found to be discriminatory, any other business that also kept that person out could be held liable as well.

But Lieutenant Scott Davidson of the Burlington Police Department explains that a police officer can refuse to issue a universal trespass order if he or she suspects the request is for an unreasonable, inappropriate or discriminatory reason. "The reality is, no business has made an unreasonable request that I'm aware of," he says. "If someone is causing enough of a disturbance to warrant a police response, usually they've committed some offense."

Though Davidson hasn't compiled any statistics to demonstrate the program's effectiveness, he insists the program works, as evidenced by its growing support among officers and shopkeepers alike. As he puts it, "It's just one more tool in the arsenal of community policing."

Not surprisingly, many proprietors are far less concerned about the small risk of a lawsuit than they are about the very tangible and costly losses resulting from shoplifting. In 2003, retailers nationwide lost $10.7 billion due to shoplifting and another $15.8 billion to employee theft, according to the National Retail Federation.

At the Body Shop, Bradley says he's not worried about the constitutionality of the universal trespass policy. "As far as I can tell, it's legitimate because you're banning people from a private space for a specific behavior, which is your right," he says. "Shoplifting is wrong and you've got to do something about it, so damn the torpedoes, full speed ahead."

Nief still feels like he took an unfair hit. Though his yearlong banishment from Church Street has ended, the entire affair left a bad taste in his mouth. "I wish that businesses involved would realize that it doesn't work. It can't work," he says. "And in order to make it work, it would become so obvious that it's a violation of people's civil rights that there would be an uproar."