Everything You Need to Know About the New Vermont Lake Monsters 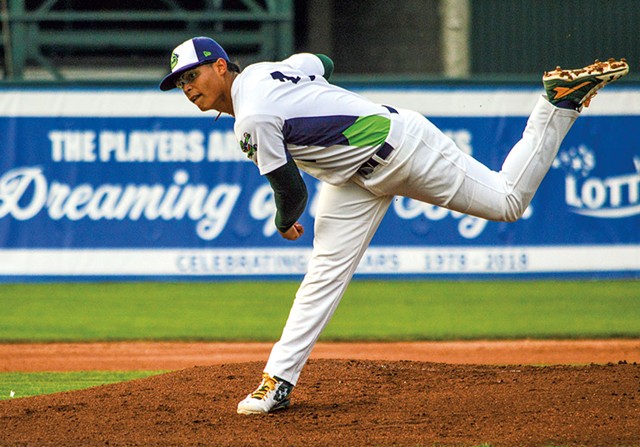 The final out of the Vermont Lake Monsters season was recorded at Burlington's Centennial Field in September 2019. In its wake, a cloud of uncertainty hung over the franchise like infield dust after a play at the plate. As winter rolled in, whispers that the team might not be long for the world became full-on rumors about a Major League Baseball proposal to shrink Minor League Baseball and eliminate teams. Vermont's only professional sports team was likely to be among them.

The speculation hit fever pitch in early 2020 and grew louder against the backdrop of a global pandemic that canceled the seasons of all 160 MiLB teams, along with nearly everything else.

Then, in February 2021, rumor became reality. MLB announced the elimination of 40 minor league franchises, including the Lake Monsters. There was no joy in Mudville; the mighty Champ had struck out.

Later that month, though, the team got a second lease on life. Longtime owner Ray Pecor sold the franchise to an investment group called Nos Amours Baseball Club, which will run the Lake Monsters as part of the Futures Collegiate Baseball League. It's a college all-star league with eight teams in Massachusetts, Maine, New Hampshire and now Vermont.

Nos Amours is headed by Chris English, a Montréal native and hedge fund manager who splits his time between South Woodstock and Boston. English also owns another Futures League franchise in Massachusetts: the Brockton Rox.

Just like that, high-level baseball is back in Burlington.

"The quality of baseball will probably be a little bit better than the New York-Penn League." C.J. Knudsen tweet this

Although the Queen City Nine won't be pros, the team might not look or feel all that different from what fans recall from seasons past. The Lake Monsters will play home games at Centennial Field — the oldest active ballpark in the country — and wear their usual uniforms. Local families will again house players (the team is seeking volunteers). Beloved local broadcaster George Commo will call the games, which will stream online. And, yes, Champ will be there, too, twerking atop the dugouts like always.

Still, there will be some changes at the old ballyard. With the Lake Monsters' 68-game season set to begin on May 27 — including the home opener on May 29 — let's break it all down, FAQ-style.

That's a little complicated. In a nutshell, in February, aiming to streamline both finances and player development, MLB realigned its entire minor leagues system from 160 teams to 120. Low-level MiLB teams such as the Lake Monsters made up the bulk of the 40 teams eliminated. The New York-Penn League, the short-season Single-A Division in which the Lake Monsters had played since 1994, no longer exists. That means the franchise is no longer affiliated with MiLB or the Oakland Athletics, which was formerly the team's MLB parent club.

Totally. Contraction of the MiLB had been rumored for several years and drew passionate criticism from fans and politicians, including U.S. Sen. Bernie Sanders (I-Vt.), who criticized the proposal as far back as 2019. When MLB announced its plan for contraction in February, the longtime Dodgers fan — as in Brooklyn Dodgers, not Los Angeles — lambasted the league and commissioner Rob Manfred on Twitter, calling the move "a disaster for baseball fans, workers and communities across the country." Sanders also vowed to "do all I can to fight it."

Which was what, exactly?

Eh, apparently not much. Though Bernie might be relieved that MLB did subsequently increase the salaries of MiLB players across the board, that's cold comfort to players who no longer have jobs.

How did Champ take the news?

The Lake Monsters mascot was unavailable for comment. But multiple sources spotted him alone on the Burlington waterfront this winter with stiff takeout cocktails from Shanty on the Shore, which is just across the street from the team offices.

So, what is the Futures League?

The Futures League is a college all-star league that is basically a showcase for pro scouts. As Seven Days deputy news editor Sasha Goldstein reported in February, "It pulls players who are 'enrolled in a NCAA- or NAIA-sanctioned college or university,' are in 'good academic standing, and have at least one year of collegiate eligibility remaining,' according to the league website. Top incoming first-year student-athletes can also participate."

In a phone call, Lake Monsters senior vice president C.J. Knudsen compared the Futures League to another collegiate summer league: the Cape Cod Baseball League, which has a storied history of turning out major leaguers.

They're not pros, though. So the baseball won't be as good, right?

You might think not, but Knudsen disagreed. "The quality of baseball will probably be a little bit better than the New York-Penn League," he said.

He's got a point. Knudsen was the Lake Monsters' general manager from 2000 to 2009 before leaving for another baseball job, which means he's more familiar with MiLB players than you or I. He noted that many players in the Futures League are on full scholarships, so they have an incentive to stay in school rather than turn pro. They're likely to be older and more experienced than kids who were drafted out of high school and play in the low minors.

One of the cool things about Lake Monsters games was watching guys like Jesús Luzardo and Sean Murphy, who go on to make the big leagues. Any chance we'll still see future pros?

Absolutely. 2014 Futures League alum Jason Vosler made his MLB debut in April with the San Francisco Giants. Outfielder and 2012 Future Leaguer Chris Shaw also broke into the bigs with the Giants in 2018 — he's in the Baltimore Orioles farm system now. And pitcher Aaron Civale (2016) is 5-0 this season for Cleveland. To name a few.

Knudsen also noted that about 200 Futures League players have gone on to play in the minor leagues. So, as he said, these guys are really good.

If these guys aren't in pro systems, where are they from?

This is a cool thing about the Futures League: At least 13 players on each team's roster have to be from New England or play for a New England college. That means a lot of the players have local ties. In fact, the first three signees the Lake Monsters announced this spring have Vermont connections: 2018 Brattleboro Union High School grad Leif Bigelow (currently with the University of Maine Black Bears), U-32 High School senior Owen Kellington and Middlebury College's Evan Stewart. All three are pitchers.

Pitchers are cool. But I really like home runs.

That's not technically a question. But really, who doesn't love the long ball? And the Futures League has a wrinkle involving dingers that might actually make you root for ties. Instead of having tie games that theoretically could go on forever — or applying the silly new MLB rule by which teams start each extra inning with a runner on second base — the Futures League settles games that are even after the 10th inning as God, or Hank Aaron, intended: by smashing the bejesus out of baseballs with an impromptu home run derby.

OK, big question: What are the pandemic-era guidelines at Centennial Field?

Well, lately Centers for Disease Control and Prevention and state guidance tends to change in about the time it took you to read this sentence, so be sure to call ahead or check the team website for updates. As of press time, though, Knudsen said the number of vaccinated fans allowed at the park is unlimited. In May, 300 unvaccinated fans will be allowed at each game. That limit will jump to 900 in June and is likely to be lifted entirely by July 4, or whenever the state eliminates restrictions on public gatherings — probably earlier, if current trends hold.

There is no Hot Dog Heaven.

Some things are just sacred, 25-cent hot dog nights at baseball stadiums among them. The Lake Monsters' schedule has three Hot Dog Hysteria events listed this season, on July 8 and 27 and on August 11.

Knudsen did say the Lake Monsters might rethink the name: "We might change it again to Hot Dog Happiness, because we like happiness better than hysteria."