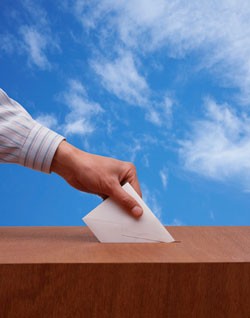 In March 2006, Democrat Hinda Miller lost the mayor’s race to Progressive Bob Kiss in the city’s first demonstration of “instant runoff voting.” According to election officials, IRV went off without a hitch — more than 99 percent of the ballots cast were deemed valid — and for a time state lawmakers debated whether to adopt IRV for statewide races. But Miller, who’s also a state senator, was sharply critical of the procedure. During the campaign, her other major opponent, Republican Kevin Curley, told his supporters that Kiss would be his “second choice” for mayor. Curley’s nudge may have pushed Kiss over the top.

“I, as a candidate, couldn’t figure out how to game this system,” Miller explained at the time, ruffling feathers for suggesting that candidates could “game,” or cheat, the system in order to win; she later explained that she’d only meant the word as a synonym for “strategize.”

In an IRV election, voters rank their choice of candidates in order of preference, making as many selections as there are people running for the office. When the votes are tallied on election night, if one candidate doesn’t get more than 50 percent, the two frontrunners collect second-choice votes from candidates who’ve been knocked out of the race. If a voter’s second choice has already been eliminated in the first round of counting, the machine automatically goes to their third choice, then their fourth, as necessary, until one of the top two candidates wins a majority. With five candidates in the Burlington mayor’s race this year, election watchers say that IRV will almost certainly come into play.

IRV complicates the electoral process for candidates in two ways: First, candidates and campaigns have to appeal to their supporters and to the supporters of their opponents if they’re going to garner number-two votes. Second, although voters understand what they’re supposed to do with the ballot in the voting booth, many are unsure if following the directions actually helps or hurts the candidate they want to see elected.

One advantage of IRV is that voters and candidates find out immediately who wins, saving the time and money of holding a traditional runoff election, which can take weeks to organize and cost taxpayers an additional $10,000. IRV also eliminates the “spoiler effect,” whereby two candidates with similar ideologies or platforms split their base of support, allowing a third candidate to win. (Unsurprisingly, Vermont Republicans have been dead set against the idea at the state level; in Alaska, however, where the GOP base is split by other right-leaning political parties, the Republicans support it.) For this reason, and the fact that fewer people typically participate in traditional runoff elections, proponents say that IRV is the fairest way of gauging the will of the electorate.

Another way to think about IRV is that voters give their ballots marching orders. Assuming no candidate wins a majority after the first round of counting, as long as your favorite candidate still stands a chance of winning, your ballot will continue voting for that candidate. Your second, third and fourth choices will never come into play unless your first choice is eliminated and cannot win, Kleppner explains.

For this reason, there’s no strategic advantage to “bullet” voting, or casting a ballot with just a first-choice pick. In fact, a campaign strategy based on bullet voting can backfire. If your candidate tells his supporters to do so, his opponents may do the same. And, your favorite candidate may need those second-choice votes from the other candidates in order to win.

Another popular misconception is that IRV allows some voters to cast more votes than others. Not true, Kleppner says. Mathematically, IRV works exactly the same way as if voters showed up for a traditional runoff race and picked one of the two final contenders. In each round of IRV counting, each voter is entitled to just one vote.

Interestingly, a ballot marked with the same candidate in all four rankings is not ruled invalid. If the voter’s intent is clear, that vote will count as long as that candidate is still in the running.

However, picking your favorite candidate in all four spots doesn’t help your candidate, either. If your candidate is knocked off in the first round, the tallying software will automatically look for another candidate who’s still in the running. Since there isn’t one, you’ve effectively decided to sit out the runoff.

Others have suggested that if a candidate gets many second-place votes, he can win by avoiding the controversial issues. Not true in IRV. If your candidate doesn’t get a large chunk of first-choice votes, he won’t make it into the runoff rounds. Simply put, the best strategy for voters is to honestly rank the candidates in order of their preference.

Kleppner, who worked for five years as an IRV advocate before becoming an elections consultant, says he think IRV reduces campaign mudslinging, even if there’s not yet a lot of hard evidence supporting that claim. It may explain the civility exhibited by the four major candidates in Burlington’s mayoral race. Virtually all the debates — and there have been many — have been relatively firework-free.

“San Francisco has had five of these elections now,” Kleppner notes, “and I think most commentators have observed anecdotally that there’s less overtly negative campaigning and there’s more positive campaigning.”

Is there a campaign strategy for winning with IRV?

“There is,” Kleppner says matter of factly: “Get a majority of the votes.”