Eva Rose King, 'On the Other Side' 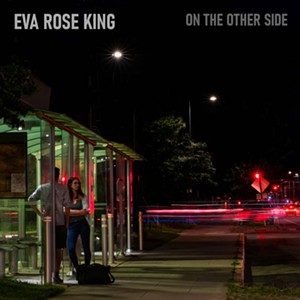 "I held you longer than I should," Eva Rose King sings on "Imagined Dove," the opening track of her new record, On the Other Side. Devastated acceptance plays out in her voice as she comes to realize that she has expected too much of a lover. "Nudging you upwards as a foil to my love," she continues. "Reckless reliance on an imagined dove."

King's lyrics are full of regret, but it's the power of her voice to evoke emotion that gives the song authenticity. There's a depth to her delivery, a sense of power held tightly in check. Her intensity filters through a melodic, many-colored prism until it presents itself to the listener as a complex and fully formed story. On the Other Side is a long, slow burn that stays alight for 12 tracks of unrequited love, naked confessions and resilience in the face of heartache.

The University of Vermont PhD candidate recorded the album at Tank Recording Studio in Burlington. King's studies have kept her something of a secret, but this city is too small to keep secrets for long, and her first studio album is quite an introduction.

Chock-full of Vermont talent, such as bassist Robinson Morse and drummer Geza Carr, the record is an early contender for the year's best. From "Imagined Dove" to closing track "Sunburn," On the Other Side is crafted with skill and intention.

A classically trained viola player, King writes with an easy sophistication. The sunlit, peaceful vibes of "Seabirds" feel a million miles removed from the lounge jazz of "Like You." Neither shares the dark, Appalachian-gothic folk tone of "Point and Shoot." The DNA of King's persona is equal parts singer-songwriter and mysterious chanteuse.

It's hard to pinpoint the album's zenith, but the title track might be it. "On the Other Side" has that perfect mix of pain and strength that underpins the music of artists such as Mitski and Angel Olsen.

King leans into the straightforward ballad and lowers the emotional boom to convey intertwining hurt and acceptance. "Been calm in a crisis and I've been crazy in a calm," she croons over Leon Campos' gentle piano progression. "If the whole world turns to shit, I'd rather just putter along."

In that moment, realizing that one must press on with or without love, King makes a statement that forms the underbelly of the album and provides a thesis of sorts. On the Other Side is saturated with yearning.

King has stepped out of the shadows with her debut, a slickly produced record that introduces her in the most emphatic way.

Download On the Other Side at evaroseking.bandcamp.com and get acquainted.

Album Review Eva Rose King On the Other Side