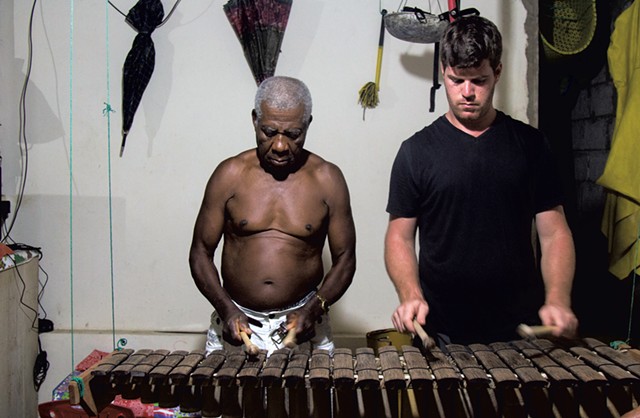 The marimba looks like something anyone could play: a row of wooden bars resembling a xylophone that's struck with two wooden mallets. Yet this ancient instrument has spread across the globe, with widely different cultures using it in different ways. At a lecture at Saint Michael's College on Thursday night, the public can hear a demonstration of marimba playing as it's done today in coastal Ecuador and Colombia.

The musician and lecturer, Jud Wellington, may be a self-declared "WASP from Cape Cod, land of the WASPs" (and the owner of a droll wit), but he's also an expert. Wellington, 31, graduated a decade ago from St. Mike's with a double major in music and anthropology and went on to earn a master's and nearly finish a doctorate in ethnomusicology from the University of Illinois at Urbana-Champaign. (He is now ABD, "all but dissertation.") Along the way, he spent three years doing fieldwork in coastal South America.

Keep in mind that St. Mike's has no stand-alone music department; its five music professors are part of the fine arts faculty. For a finely trained ethnomusicologist to emerge from its alumni is a feather in the college's cap. Music professor Nathaniel Lew, who specializes in British 20th-century classical music and taught Wellington music theory, was thrilled to orchestrate the return of someone he calls "an enormously accomplished alum."

Wellington got his first taste of the discipline of ethnomusicology from professor Josselyne Price, a specialist in Ghanaian music who began teaching at the college a year before he arrived. Price has studied the tonal changes in Ghanaian drumming that resulted from the impact of bushmeat over-hunting on drum-top hides. She forms the ensemble Akoma with each year's crop of students in her West African drumming class, who learn Ewe drumming.

Wellington, a pianist in high school, took Price's Intro to World Music class and seven semesters of her drumming class. After graduation, he traveled with her to perform at a New Orleans drum fest.

Since then, Price has kept in touch with Wellington on Facebook; she recalls him as "a serious student and a very not-serious guy, which I loved." While learning lead-drummer styles from Price, she notes, Wellington used cheekily to imitate her every gesture and expression.

"Is that what she said?" Wellington says with a chuckle when reached at his office at the City University of New York's Baruch College, where he is an adjunct instructor.

Wellington went from the New Orleans gig to an internship at the Library of Congress' American Folklife Center, where he compiled an online database of the entire collection of African recordings. In the course of converting the reel-to-reel tapes to digital format, he recalls, "I got to listen to recordings from all over sub-Saharan Africa made in the 1940s and '50s."

At that time, ethnomusicology was still thought of as a discipline that preserved far-flung musical traditions. "Now it's accepted that that's paradoxical," Wellington says. "If you try to preserve it, it's going to change anyway. Change is the only constant with culture."

Now, he says, ethnomusicologists ask why people make the music they do, how it's exploited to create a sense of nationalism, and "how staged performance music is rooted in what you find seven hours in a canoe up a river," among other questions. At his lecture, he'll touch on the history of the marimba as it relates to slavery and liberation processes in coastal South America.

Price's influence has remained with Wellington. When he reached Urbana-Champaign's master's program, word had already spread of his Ewe drumming abilities. He continued playing for four years while at the university and performed and toured with a master drummer from Guinea.

"When I went to Ecuador," he says, "I didn't want to stick out like a sore thumb, so I studied phonemes and translations to get my Spanish really good. The only time I would feel out of place was when I went to the capital [Quito], and people would say, 'You're a gringo but you talk like a black person from the coast.'"

When he visits the college on Thursday, Wellington will drop in on a new St. Mike's course on field methods in ethnomusicology, taught by William Ellis. A specialist in blues, gospel, soul and other traditions of the American South, Ellis joined the faculty in 2011. He established the New Voices music series at the Flynn Center for the Performing Arts to showcase Somali Bantu, Nepali and other New Americans making music in Burlington. Ellis' nine field-methods students will conduct fieldwork with some of those musicians, including A2VT, a local Afro-pop and hip-hop group.

Wellington's visit will underline what Ellis hopes his students realize: that ethnomusicology is "all about relationships. I hope they form friendships," he says, with their "informants" — as the individuals conveying their musical knowledge are called in the field.

Certainly, relationships are what bring this musician-academic back to Colchester. Says Lew, "It's so important for students to know there's music everywhere and that they can study it. And it's such an exciting opportunity to see someone who went here. They'll think, He's one of ours! Cool."