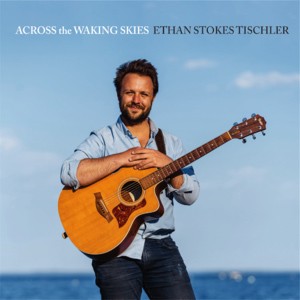 The German poet Berthold Auerbach once wrote that music washes away from the soul the dust of everyday life. I was reminded of him when listening to the Maine- and Vermont-based folk singer-songwriter Ethan Stokes Tischler's first full album: the breezily sincere, tenderly smooth Across the Waking Skies. After two long pandemic years, listening to Tischler's music gave my soul a good dusting off.

Several tracks feature vocals from Tischler's creative partner, Elsie Gawler, who beautifully harmonizes with Tischler. Elsie and her siblings in the Maine-based Gawler Family Band also provide instrumentation, helping to make the album a real New England affair. Listen to the gossamer flight of arpeggios at the beginning of the album's opening track, "Sing You to Sleep," and then try not to picture the descent of autumn leaves on a quiet Green Mountain trail.

Across the Waking Skies was produced in quarantine during the pandemic. Its artists submitted their parts from all over New England, and Tischler mixed the songs in Lincolnville, Maine. In Charlotte, Vt., the album's sound engineer and pianist, Lane Gibson, made the final mixes. The album's deft synthesis of elegant, crooning string work, athletic pacing and well-controlled lyrics certainly do not reveal the Frankenstein-like means of its production.

Tischler's songs discuss love with all the sincerity of a child — and all the wisdom of a septuagenarian. This album's canvas is the human heart. The bond between a father and his child transitions to a meditation on maturity on "Elijah." "Stay With Me" explores the daunting, strange perfection of committed romance.

I cannot stress enough the gentle warmth of Tischler's voice. In the opening of the syrupy track "Meredith," he gives a succinct but thoughtful account of new parenthood: "You came into the world with those two eyes of shining blue / And I knew right then my world was spinning around you."

All the tracks feature incredible work from mandolinist Greg Pauza and the Gawler Family Band on strings. The background of the album's second song, "Woodbury Road," twangs with folksy flourishes. Simultaneously, there is something lofty and just plain moving in how the orchestra elegantly greets the music's more rustic threads.

In the lyrics of "Woodbury Road," Tischler layers rhymes inside of rhymes in a way that complements a key theme of the song: how memory flits in and out of consciousness. "Still I think of you when the moon is new and the dew is shimmering out of the pines," he sings. "Would you could have stayed like a shining blade to cut away these fears of mine."

The album's final song, "All Will Be Well," has an old-time Woody Guthrie folk sound. Simple in its legato optimism, the chant matter-of-factly confronts the mess of reality — and finds beauty in the heart's resilience.

Across the Waking Skies is available at ethanstokestischler.com.