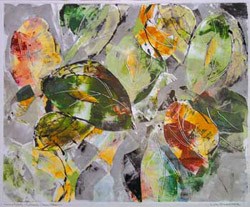 The old Tip Top Bread building in White River Junction has become a showcase of Vermont's "creative economy" since its redevelopment in 2001. The new 42,000-square-foot incarnation, christened the Tip Top Media & Arts Building, now houseses a cafe and dozens of business and studios. The Two Rivers Printmaking Studio, so named after the nearby confluence of the White and Connecticut rivers, is one of the main attractions. In celebration of the studio's fifth anniversary, Burlington's Flynndog gallery is hosting an exhibition of prints by more than a dozen Two Rivers artists.

Bill Darling's dramatic, black-and-white figurative etchings are highlights of the show. "Flamenco" focuses on the face and graceful, outstretched arm of a female dancer. Her eyes look to the lower right of the slim horizontal composition, while her arm bisects the picture plane. Darling's exquisite draftsmanship captures the tension of that gesture.

Traditional etchings are made by coating a zinc -- or other metal -- plate with an acid-resistant medium, then drawing lines through that coating. The lines are etched in an acid bath, and the plate is cleaned, inked and printed. In photo-etching, a photographic image is developed on a light-sensitive plate prior to being etched and printed. Debra Jayne's pieces are the only examples of that technique in the show.

Her photo-etching "Rainy Day" is a park-like scene in a thin, vertical composition. The images are described in silhouettes; leafless trees cast shadows into the foreground and darken the distant edge of the parkland. The rain appears as fine striations, "pouring" from top to bottom right.

Ian Baldwin's dry-point print, entitled simply "K," is endowed with a broader range of grays. A huge mushroom cloud appears on the horizon, and a car in the foreground speeds away from it on a flat country road. Baldwin's flurry of fuzzy tonalities seems executed with the same urgency as is the motorist's escape. The dry-point technique is direct, as lines are simply scratched onto the etching plate without using an acid bath.

Monotypes provide some of the exhibition's most colorful offerings. "Sea Grapes" by Elizabeth Gardener is a leafy monoprint with collage elements rendered in translucent greens, raw sienna and grays. She deftly varies the weights of her lines in the shallow space. Fine white lines describe foreground leaf veins, while darker lines appear further back.

"Summer Meadow" by Nancy Gerlach is rich with thin, white lines similar to those of Gardener's, but the monotype also has a firmament of cerulean blue. Below, a tangle of green and ocher grasses and wild flowers fills the space, though they are only loosely representational. Gerlach's other two monotypes, installed side by side, are even more abstract. Five patches of red-orange punctuate the cool, blue-green hues of "Orange and Green," while "Town and Country" is enlivened with indigo and yellow ocher. The chromatic harmonies are impeccable in both.

About 15 printmaking techniques, from lithography to gum-eraser stamp printing, appear in this show, and all 16 artists have mastered their exacting crafts. The Tip Top building hasn't been a bakery since 1974, but with any luck the artists at Two Rivers Printmaking Studio will make enough bread to survive.