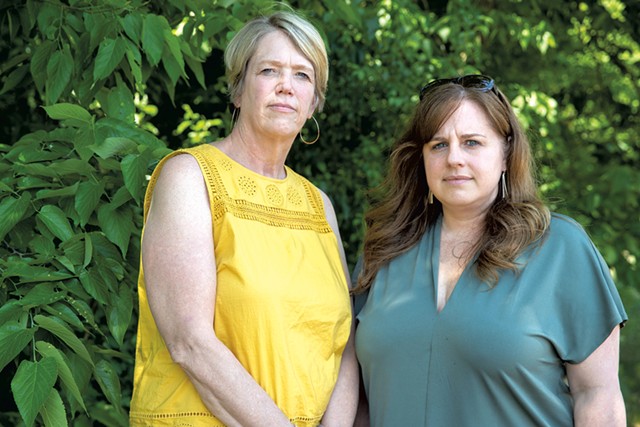 An equity policy proposed for the Essex Westford School District has galvanized members of the suburban community in recent weeks, drawing hundreds of people to both virtual and in-person meetings.

Critics of the policy say it is divisive and difficult to parse, and supports teachings that might make white students feel shame and guilt. Supporters, meanwhile, argue that grappling with issues of race and equity will help kids become critical thinkers and improve education for all students.

"We want to remove barriers for students so that everyone is able to achieve high standards." Beth Cobb tweet this

Essex Westford school leaders assert that there is nothing that should be controversial about the proposed policy, which likely will be put to a school board vote on June 15. Instead, they say, the district's commitment to equity is part of its overarching vision and aims to make school a place where all of its 4,500 students — 14.6 percent of whom are nonwhite — can succeed. This, they argue, is the fundamental charge of public education.

"We want to remove barriers for students so that everyone is able to achieve high standards," superintendent Beth Cobb said at a June 1 school board meeting.

Around 150 community members joined that virtual meeting to opine on the policy and listen as the board reviewed it a second time. Another special board meeting on Monday night, attended by more than 200 people, provided an additional opportunity for public comment.

Most spoke in support of the policy. Founders Memorial School student Andre Redmond said that none of his teachers has been Black like he is. He said that classmates frequently touch his hair without asking.

"I know that some people think students shouldn't be at school board meetings, but our voices are important, too," Redmond said. "I love school so much, but it's hard to learn when I have people touching my body without my permission or when I'm being treated differently than my white friends."

Alison Corcoran, who said her middle school son is a racial minority, told the board that she wants the policy put to a town vote. "You do not have my permission to teach my son that his friends treat him differently because of the color of his skin," Corcoran said. "Equity reinforces victimhood ... I do not think that is a recipe for success."

School board chair Kim Gleason and Liz Subin — a former school board member who was unseated in April by Liz Cady, a vocal critic of the equity policy — both said the policy simply codifies what's already in practice.

"This is work that the district has been committed to for many years now," Gleason said.

The community debate has raged for months and came to a head in late May, when supporters and critics of the policy held dueling gatherings across the road from one another.

More than 100 people packed into Essex Center Grange Hall #155 to hear Cady speak alongside state Sen. Russ Ingalls (R-Essex/Orleans) and Essex High School senior Alex Katsnelson. Cady conflated the district's commitment to equity with critical race theory — an academic framework that has come under fire in recent months by Republicans across the country — and said that it has no place in schools.

Meanwhile, at the Essex Center United Methodist Church, student members of the high school's Social Justice Union spoke in favor of more candid conversations about racism in their classes.

The school board voted unanimously last summer to raise Black Lives Matter flags at all district school buildings. And in the months that followed, a group of community members and students drafted the equity policy. It's meant, in part, to help close gaps in student achievement, according to Erin Maguire, the district's director of equity and inclusion.

District data show that Black, low-income, special education and English-learning students are not doing as well academically as their peers, Maguire said. A similar percentage of Black and white elementary school students were proficient in reading, the data showed, but Advanced Placement and honors classes at the high school were disproportionately made up of white students.

The policy says that the district "approaches equity through recognizing and redressing the impact of racism in the United States" and vows to provide all students with "what they need in support of their academic, social-emotional and career development."

The proposal lists 13 "indicators" that show the policy is working, such as diversifying the curriculum and faculty; providing mandatory professional development for staff around bias, stereotypes and equity; allowing students and staff who share an identity or common goal to meet in "affinity groups"; and teaching history in a way that undoes "revisionist frameworks that perpetuate inaccurate portrayals of people in privileged and subjugated positions."

"If a teacher is instructing around the arrival of Europeans to this country, whose lens are they teaching that concept through?" Maguire asked as an example during the June 1 board meeting.

Sophomore Maddie Ahmadi, a member of the Social Justice Union, wants students to be taught a truthful account of history, even if it's sometimes depressing. "I have never once been upset about learning about the failures of our past," she said. "However, I have been upset by our failures."

Senior Ali Stevens agrees. "I think it's important for all students to get a holistic and accurate idea of what our history is like and how things are today," she said.

Ahmadi thinks critics misunderstand the policy's intent. "It's not going to harm them, and it's not going to make everyone the same," she said. Instead, it's "giving all students the chance to shine and achieve their goals."

In an interview, Maguire said some of the community opposition to the district's equity work comes from a misunderstanding of critical race theory, a term that has become a lightning rod in the public school culture wars. Republican-led legislatures in states including Idaho, Oklahoma, Georgia and Wisconsin have advanced bills or passed laws that ban the theory in schools or limit how teachers can speak about race.

Locally, people such as school board member Cady and state Sen. Ingalls have seized on critical race theory, as has conservative commentator John Klar, who called it "toxic, hate-filled, race-based invective" being thrust onto Vermont children. "Since educators can't think critically, parents had better do so," Klar wrote in a piece published on the conservative website True North Reports. Klar unsuccessfully challenged incumbent Phil Scott for the Republican gubernatorial nomination last year.

Klar and Cady will join others, including Rep. Arthur Peterson (R-Rutland) and Rutland City school board member Tricia O'Connor, to discuss critical race theory at a June 16 town hall in Rutland. It's organized by the conservative group Vermonters for Vermont, which aims "to educate all Vermonters on the dangers of Progressive and Democratic public policy plans."

Cady did not respond to multiple requests for comment.

Despite the backlash, the focus on equity in education is moving ahead. This school year, the Vermont School Boards Association issued its own equity policy, and the Burlington School District created an Office of Equity. The Champlain Valley School District — the largest in the state — recently hired its first director of diversity, equity and inclusion.

Critical race theory is not a curriculum or a course taught in Essex Westford schools, Maguire explained. Rather, it is a set of concepts and practices that helps people think about how race affects the world in which we live.

"We're not trying to form opinions for students. But what we are trying to do is make sure that they have an opportunity to engage across a myriad of different conversations, and right now, race is a really important part of the national conversation," Maguire said. "To deny access to that feels inappropriate, at best."

Cobb, the superintendent, said that the politicization of the term "critical race theory" has complicated the district's equity work. "What we're doing — it doesn't matter what side you're on. It's about all people," she said. "We need to come to the middle for our students."

The district's 12 principals seem to agree. They all signed a letter last month saying they "commit to working to provide a safe and inclusive environment.

"We have a shared responsibility to take an active role in identifying bias and antiracism to promote a more equitable, just and safe place for all EWSD students to grow and thrive," the letter reads.

Writing the equity policy was a monthslong process. A group of about 20 community members and students who identified as Black, Indigenous or people of color met multiple times with Tabitha Moore, a diversity, equity and inclusion consultant and former president of the Rutland Area NAACP. The draft policy then went to a subcommittee made up of two students, two parents, two board members and Maguire, before going to the full board for consideration.

About 700 people also shared their views on equity through an online survey. Eighty-three respondents said they strongly opposed the equity work the district was doing, according to Maguire, "primarily due to the Black Lives Matter flag and critical race theory."

Maguire said it was clear from the feedback that those who had vastly different beliefs on such issues still had some common ground. They all agreed with statements such as, "Essex High School should allow students to take AP and honors classes," "Every student has inherent value," and "Every student should have the opportunity to receive the education and resources they need to flourish," she said.

"When we are explicit about the work of equity, people seem to become afraid," she said. "When we talk about it through the outcome, people seem comfortable."

The original print version of this article was headlined "Unplanned Lesson"