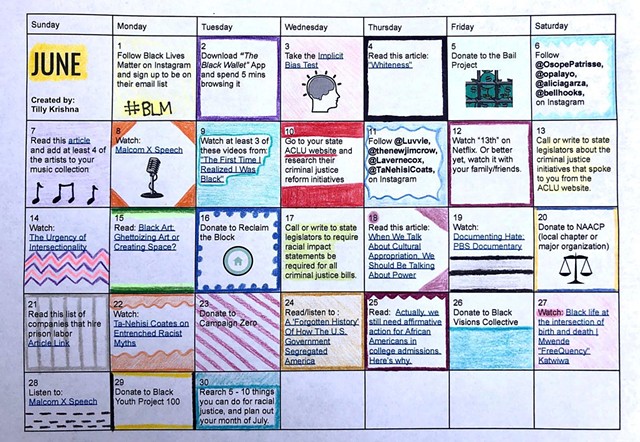 What do the Vermont Arts Council, the Slow Living Summit, the Lake Champlain Chamber Music Festival, the Champlain Housing Trust and Planned Parenthood have in common? This past week, all of them — and many, many more, from cultural organizations to for-profit businesses — put out strongly worded statements in solidarity with black and brown Americans. Some directly address police brutality, white supremacy or racially motivated violence; others call more generally for social and economic justice.

Cynical observers might dismiss these statements as ineffectual responses to yet another police killing — in this case the victim was George Floyd, a 46-year-old African American man in Minneapolis. But the sheer number of the messages, along with massive protests around the globe, bolsters the emergent view that this moment — this death, this reaction — is actually a tipping point in the harrowing history of race relations in America.

But the harder work of actual systemic change lies ahead. To that end, recommendations for those who would be allies have been circulating on social media. They include ways to help financially, such as a fund covering the legal fees of cited protestors, a compendium of black-owned restaurants and other businesses to support, and lists of individuals seeking direct reparations.

In the how-not-to-be-a-racist camp, however, few approaches surpass that of local teen Tilly Krishna.

Krishna is a rising senior at Essex High School, a student representative on the school board and the organizer of a social justice group at the school. At the tender age of 16, she is already fluent in activism. She has focused her considerable passion on gender discrimination, refugee and immigrant issues, and gun control, as well as racial justice.

Though Krishna has taken part in local Black Lives Matter protests, her uniquely proactive response to events of the past couple of weeks was to create a 30-Day Anti-Racism Challenge — literally on a calendar. It's essentially a daily pedagogical to-do list for the month of June, but one could start on any date. The point is simply to do it.

"You can't just go to one protest and say your work is done," Krishna says in a phone interview. "For a white or non-black person of color, the best thing you can do is get educated."

Day one starts off easy, with an instruction to follow Black Lives Matter on Instagram and sign up for the newsletter. Over the course of a month, "students" will watch videos, including speeches by Malcolm X and a talk by Ta-Nehisi Coates on entrenched racist myths; read a variety of texts; donate to mission-specific organizations; and engage in actions, such as contacting state legislators to discuss criminal justice initiatives.

On day 30, Krishna suggests, "Research 5-10 things you can do for racial justice, and plan out July."

"One of the biggest things about being an ally is to acknowledge and understand white privilege," Krishna says. She notes that her calendar exercise "doesn't blame people for being white or having privilege." Rather, she hopes that people will go on a journey of discovery, trying to understand the realities of living while black. Krishna didn't specifically draw her suggestions from other anti-racist guides; in fact, she observes that the "endless" resources online and in social media can be overwhelming. "I wanted to create a really concise way to begin," she says.

"The people who really need to hear this can be too lazy to do the research themselves," she continues. "I researched all the articles with my sister ... We need to understand why we are where we are right now. I tried to choose resources from black voices."

Krishna, who is also a competitive tennis player at Essex High, was born in Wisconsin but moved with her family to India when she was 4. Six years later, she says, her father, Raghavendra Krishna, was hired at Montpelier-based National Life Group, and the family relocated to Vermont. Krishna remembers being surprised by how different the state is from Wisconsin but says she quickly grew to love it.

That said, she has experienced racism here, both nonspecific — such as swastikas painted on her school — and personal. "I haven't experienced violent racism," she clarifies, "but I see the stereotyping.

"Vermont has a lot of racism, and we have work to do," Krishna says. "The number of microaggressions is crazy." And privileged white people, she points out, might not take racism seriously unless they feel some consequences in their own lives.

"More recently there's been more exposing of racism on social media," she says, citing a Snapchat by an Essex student to another that said, "go back to the cotton fields." The recipient took a screenshot of the message and shared it on Instagram.

"The people being accused are getting really defensive: 'No, I'm not racist!'" Krishna says.

For her, overcoming racism starts with education. Last year, she was one of 900 high schoolers who attended the American Civil Liberties Union's National Advocacy Institute in Washington, D.C., a weeklong learning experience she calls "life-changing." Krishna cites ACLU deputy legal director Jeffery Robinson's advice to arm oneself with facts. "When you have the facts, you will win the debate, and that will be effective," Krishna says. "You can spark a change."

The 30-Day Anti-Racism Challenge can be downloaded here.