Essex Becomes a Battlefield in the Public School Culture Wars

By Derek Brouwer and Alison Novak 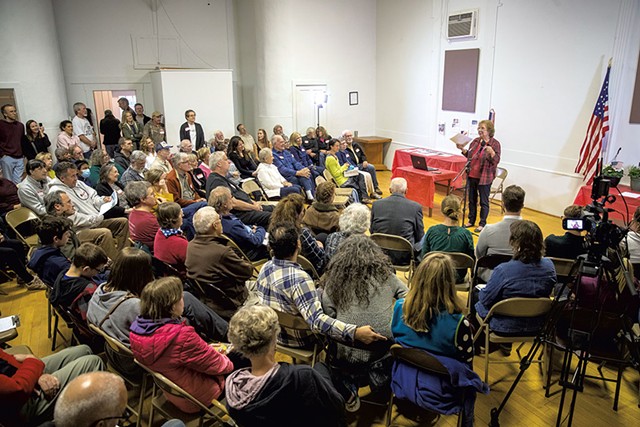 A little after 6 p.m. last Friday, people began streaming into Essex Center Grange Hall #155, an austere white clapboard building that shares a parking lot with Frank's Motorcycle Sales & Service. In sweatshirts and flannel, sweater sets and blazers, the citizens gathered for a public forum focused on critical race theory. Printouts of articles from right-wing news outlets, including the Epoch Times and the Federalist, were scattered on long tables at the back of the meeting hall. "How Public Schools Indoctrinate Kids Without Almost Anyone Noticing," one headline read.

As the crowd mushroomed, people arranged additional metal folding chairs in rows. By the 6:30 p.m. start time, an audience of more than 100, including Vermont GOP chair Deb Billado and conservative blogger Guy Page, had joined the mostly maskless, standing-room-only crowd.

Underhill Republican Party chair Ellie Martin had organized the meeting. "I love my country, and I love my grandkids, and I love all of you," Martin told the attentive crowd. "Remember, these kids of ours are our treasures. They are the future of our country. Without them, we don't have a country."

Several months ago, Martin helped arrange a bus trip for Vermonters to Washington, D.C., for the January 6 pro-Trump rally that turned into a siege of the U.S. Capitol. (Vermonters were not among the hundreds charged in connection with the riot.)

Page spoke next and led the crowd in reciting the Pledge of Allegiance — hands on hearts and eyes trained on an American flag in the front of the room — followed by a full-throated rendition of the first verse of "America (My Country, 'Tis of Thee)."

The first of the featured speakers was Liz Cady, a newly elected Essex Westford School District Board member who has been an outspoken critic of the Black Lives Matter movement, the school district's equity policy and critical race theory.

The theory, born in 1970s legal academia, posits that racism is embedded in systems and institutions such as schools. Last September, then-president Donald Trump propelled the term into the national consciousness when he ordered government agencies to cease staff trainings that employ it. Conservative commentators, including Megyn Kelly and Charlie Kirk, have ridiculed the concept as the epitome of liberal wokeness. In recent months, Republican-dominated legislatures in Arizona, New Hampshire, Oklahoma and other states have advanced legislation to ban critical race theory in schools. They argue that it is unpatriotic and divisive, and teaches white children to be ashamed of themselves and their forebearers.

Cady, who lives in Essex, assailed a Courageous Conversation training for educators that the Essex Westford School District offered in 2019. Superintendent Beth Cobb described it in a newsletter as "a seminar that helps teachers, students and administrators understand the impact of race on our lives, our work and our learning" and "investigate the role that racism plays in institutionalizing achievement disparities."

Cady called Courageous Conversation an example of critical race theory and said it is premised on the idea that our country is inherently racist.

"Most people in America, certainly most people I have met in Vermont, they do not care about the color of your skin. They care about the content of your character," said Cady, paraphrasing Martin Luther King Jr.'s "I Have a Dream" speech. Her audience clapped enthusiastically. 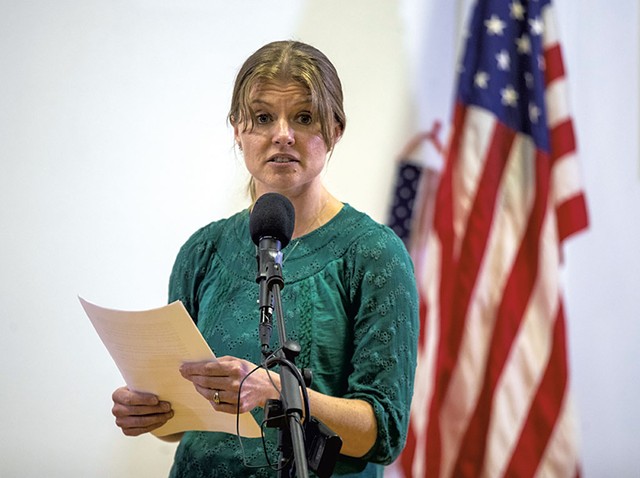 Cady also questioned Essex Westford's proposed equity policy, which she said the school board will vote on in mid-June. She said one of its tenets — that marginalized staff and students should be able to participate in affinity groups, or gatherings in which people who share common identities can connect with and support each other — was just a "nicer" way to promote segregation.

"Our public schools should be free of ideologies and theories, and they should focus on providing excellent core education for all students," she said. "[Critical race theory] and all of its derivatives, no matter how nice the words are that they use, should not be in our public schools."

Directly across the street, another group of local people gathered inside Essex Center United Methodist Church. The meeting was convened by state Rep. Tanya Vyhovsky (P/D-Essex) in response to the grange hall meeting. These attendees, too, discussed their frustrations with the school district's handling of race. But their point of view was very different.

"My husband is a person of color, and we regularly question whether it is safe to have children, and I don't think that's the community we should live in," Vyhovsky told the audience. The 40 or so participants all wore masks but still socially distanced by spreading out in the church's community room. "In all of these conversations," she continued, "the voice that we haven't heard much from is our students." She then cleaned her microphone using a Clorox wipe and handed it to a panel of six Essex High School juniors and seniors. They were from the Social Justice Union, a student club created last year.

Senior Tilly Krishna, the high school's student body president, said recent efforts to bring discussions about race into school have run up against apathy and ignorance, including among the teachers who are expected to help lead them.

"Most white adults don't know how to talk about racism at all," she said, eliciting chuckles from listeners.

"It's so hard to get people to care about this," another senior, Abby Brooks, said.

For the next 90 minutes, the students fielded questions from supportive adults in search of ways to help. Maybe teachers need to be trained, one person said. Others pressed Vyhovsky and state Rep. Marybeth Redmond (D-Essex Junction) on state policies that would encourage a more diverse faculty. 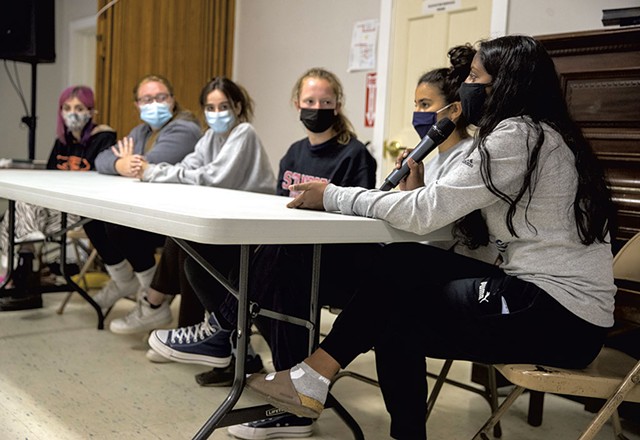 One attendee, Roy V. Hill II, commanded attention with his slow, gravelly voice. He applauded the panel of young women for their work and suggested another reason for the resistance they have encountered. The scrubbed version of American history as typically taught in public schools, he said, is a form of "indoctrination," and the ignorance that white teachers and students claim when confronted with their own racial identity serves to protect their social power.

Back at the grange hall, Essex High School senior Alex Katsnelson, wearing the hipster-formal uniform of a skinny black tie, fitted blazer and bright white Vans, reflected on what he called the "overtly political presentations" that he's experienced during his school's advisory time, a nonacademic block of the school day meant for student discussion. In one instance, he said, students were shown "an artwork piece" from a newspaper depicting "characters" such as George Floyd, Breonna Taylor and Trayvon Martin, then asked to reflect on how their whiteness contributed to those individuals' deaths. "This is why we have fifth graders coming home saying that they wish they were Black," said Katsnelson.

"They're showing our children these political things and then telling them to join them in pushing their agenda. How else can you describe this except accepted indoctrination?" he asked.

Sen. Russ Ingalls (R-Essex/Orleans), who was elected to the Vermont legislature in 2020, also spoke and lambasted the Democratic Party with generalizations. When the Senate recently voted 29-1 to declare racism a public health emergency in Vermont, Ingalls cast the "no" vote.

"The Democrats believe that all police are racist, and they also believe that nobody should be in jail and that the vast majority of the ones that are incarcerated are because of no fault of their own," Ingalls said. "Democrats also want you to know that you're racist. You don't even know that you are, but you are." Several audience members snickered.

In a question-and-answer session that followed, community members asked how they could stop the teachings on race.

Running for school board or municipal or state government was the only way, Page told the crowd. "You're never going to change their minds, people, so you gotta change them," he said, about incumbent officeholders.

One woman recounted an incident at Essex High School in which her daughter had watched with horror as classmates berated a student after he told them he had a Confederate flag that belonged to his deceased grandfather hanging in his bedroom.

"I think that the teacher was put in a position where, if they stepped up and said something, then are they going to get attacked?" she said. "The classroom was out of control." She asked Katsnelson whether this kind of incident was common in the high school.

"That's probably where things are headed," said Katsnelson. "And it might not even be the Confederate flag. It might just be because you are white. That's the end result of berating someone for their race and this antiwhite rhetoric."

A soft-spoken woman with a school-age child said she was dismayed that her son's teacher had told his class, "If you're not anti-racist, you are racist."

"I just hope that people will join me to point out how unfair this is to small children who shouldn't have to pick a side," she said. "I don't think that fourth graders, third graders, second graders should be having to think about this at all."

Several people expressed their pleasure at being in a group among others with similar outlooks.

"I came in here ready to attack you guys. I didn't know I was with like-minded people," said a man standing in the back of the room. The crowd laughed.

"That's on the other side of the street," someone quipped. They laughed again.