George Webber — the protagonist in Thomas Wolfe's 1940 novel You Can't Go Home Again — totally blew it. A writer himself, George returned to his hometown in North Carolina after mocking it in his first novel. Not surprisingly, the townsfolk were none too excited to see him back. Unnerved by their ire, George ran off again for brighter lights and bigger cities, eventually to learn the folly of his ways.

My family, which includes husband Allan and teenage son David, tends to run off, too. We lived in 20 homes over the course of two decades, a good number of which were in Vermont. We have always returned to this state and its people (including Allan's eldest sons and their own growing families) for sanctuary from our travels — a phenomenon I have written lovingly about in two memoirs. In 2020, however, our story took a strange turn when we wandered off to North Carolina in search of a larger job market for my career.

Once there, I landed a remote position. Did we move back to Vermont? Not this time. Allan and I made the budget- and weather-driven decision to buy a yet-to-be-built house in the Greek community of Tarpon Springs, Fla. (even though we are not Greek). I grew up in Florida. Whether swimming in outdoor pools for trophies or splashing in the Gulf of Mexico for pleasure, I was most at home in the water. I guess it makes sense that my residential existence would become fluid, as well, and that I would marry someone who has lived on the road as a musician and filmmaker.

Just as our recurring "go home again" story with Vermont seemed to be inching toward its final chapter, we discovered yet another way to get there: house-sitting! Besides offering us welcoming places to stay during a summer of our discontent — waiting for the Florida house to be completed after two long years and anticipating David's first year of college in New York — these gigs opened a door into the lives of people we cherish and the reasons they stay put. 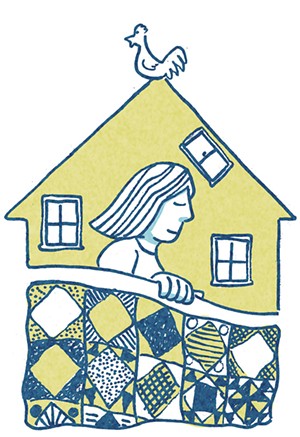 Who could leave this place? The stunningly appointed 100-year-old farmhouse sits on several acres in the rolling hills of Richmond, surrounded by English gardens and some Rhode Island Red chickens. Obviously, our pal had to step away temporarily, but only for a glorious two-week vacation in Peru. We seized the invitation to enjoy and manage her tranquil home, care for her dandy pup, and consume her free-range eggs.

On day one, a Sunday, we made omelettes and flower arrangements. We walked down winding gravel roads with the dog. That evening, we collected sticks for the outdoor firepit and made s'mores. We slept like logs in quilted beds with the windows open to the crisp mid-June night air. As every good domicile will do, this one made us feel like everything was going be OK. Om sweet om.

Then we woke up on Monday to a new, conflicted reality: free-range farmhouse versus our madhouse existence. I started running around like a chicken with its head cut off to meet pressing work obligations. David hit the pavement in Burlington looking for "We're hiring" signs so he could earn money for college. Allan hit the phones to book venues for his band, the Hokum Bros., and to talk with film festival organizers regarding his movie about Meat Loaf (the rock star, not the meal).

Our presence was turning paradise into Grand Central station. What we needed was to be more like the house itself: rooted in time and place. Even the sweet pup was perplexed by our frantic ways. He'd lie in his cozy bed and sigh, as if to say, "What will it take to slow these humans down?"

The answer came fast: COVID-19. We all got it, then took to our beds and slept and slept and slept. The house wrapped us up in its warmth and helped us heal — from disease as well as our fever pitch. When we felt better, we snuggled up on the couch together to finally watch the last four episodes of "Game of Thrones." When it came time to say goodbye to the farmhouse, I was grateful for the embrace of this edifice that held us together.

We took our chilled-out shit show on the road to Burlington, where we set up residence in a friend's bungalow in the Five Sisters neighborhood while she and her son skedaddled off to Tanzania for two weeks. As they watched lions hunt prey in the Serengeti, we raided their well-stocked cupboards, sank into their comfy furniture, admired their colorful rugs and walls, eyeballed their very curious art collection, and played with their hypoallergenic Himalayan cat.

David started his summer job from this location. Allan did double house-sitting duty for another dear friend, whose artful home and glorious gardens also needed tending while she visited family in the Midwest. We've come to accept that Allan is this friend's "house husband" to some degree, because he usually shacks up in her guest room when he's in town. In appreciation, he runs errands for her and helps with projects.

I took charge of my pal's eclectic 1920s bungalow, which is an epicurean's dream when she's home. It's a superb place to eat (she cooks everything from bibimbap to paella), drink (she has a secret family recipe known as the Boom-Boom) and be merry (she honors most of the global holidays at her antique dining table). Even a recovering alcoholic like me has a reason to celebrate here: an assortment of coffee cups from local hairy potters — and several with the superpower to impact a conversation.

I was on a Zoom call one morning with a set of extremely serious colleagues when one remarked, "Nice mug, Nancy." They weren't talking about my face, but rather what was in my hand. From my perspective, the cup looked to be a pretty shade of yellow, so I just kept sipping and talking about global conflict and climate change.

When the meeting was over, I took the mug to the sink for a rinse. There, I saw what was so commendable about it — a bright orange message that read "I'm a fucking ray of sunshine." I sat down on the deep green couch, pulled a handmade blanket over my head, and waited for human resources to call and fire me. But I also had to laugh out loud, because the situation reminded me why I love staying here so much: It's a feast for the eyes as well as the stomach. There's certainly no place quite like this home. 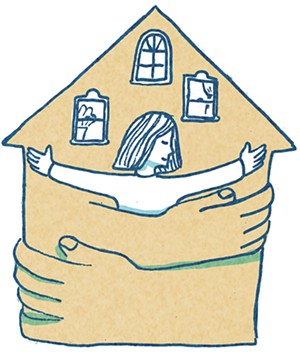 Here's where our never-ending Vermont story actually came to an end again. If we had to say goodbye, this was the sanctuary from which to do it. The people who reside in this lake-adjacent residence are endlessly reassuring, as is their abode. I felt deeply at peace here, surrounded by the powerful symbols of Judaism, even though I mostly ascribe to the Muslim faith after the United Arab Emirates rescued me from alcoholism.

I share an unbreakable bond with my friend who lives here after we spent a week in India during a particularly volatile monsoon season in 2019. It included a visit to Gandhi's Ashram in Ahmedabad, a tour of Jewish landmarks in Mumbai, and a trip to the Taj Mahal with my Muslim friend and tour guide. Wherever we went — synagogue, masjid or temple — I got a welcome home feeling in my heart.

So, while she and her family were in Israel for two weeks, my family took over their lives as well as their house. We kept the kitchen kosher; we loved their pup, Maccabee; we watched sports on television from their huge sectional sofa. I worked most days from that sofa, which seemed to take a load off my brain as well as my exhausted body. Their sweet dog joined several of my Zoom meetings, sitting next to me and staring at the screen. For this, my colleagues thanked me — because he actually is a fucking ray of sunshine.

I didn't want my pal and her family to come back, because it would mean our summer in Vermont was over — and we'd return to a life on the road until our Florida house was completed. But come back they did, reminding me that, above all, home is where the heart is. And ours just happen to be here, there and everywhere.

Nancy Stearns Bercaw is a journalist and the author of two memoirs: Brain in a Jar: A Daughter's Journey Through Her Father's Memory and Dryland: One Woman's Swim to Sobriety. She is the managing director of global internal communications for Mercy Corps, an international NGO.