Essay: A Standup Comic Riffs on Grief and Comedy 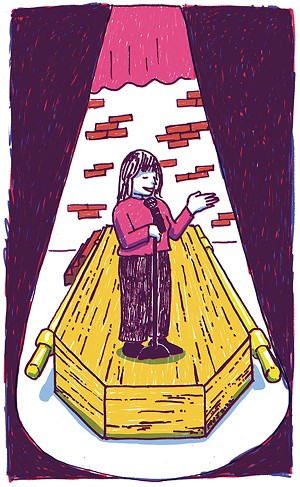 People talk to me about death a lot. After they see my standup act, they feel very free to walk up to me and say things like, "My dad died, too!" or "I loved that joke about your dead mom." It might seem inappropriate to joke about what's arguably the most serious thing we encounter as humans, but I certainly don't let that stop me.

What I do take seriously is pointing out the absurdity of death and how we handle it. Old-fashioned funeral directors will try to sell you unnecessary "upgrades." No, I do not think my beloved family member would want me to spring for a casket more expensive than a midsize sedan. Sometimes your ex-boyfriend's aunt shows up to the estate sale, and you have to tell her no, you do not want to see a photo of your ex's newborn right now. But thanks for buying all those dishes!

Sure, some people are offended when I wonder aloud whether my mom is still participating in diet culture from beyond the grave. But I've been joking about death consistently onstage for the better part of a decade, and I find that, more often than not, those in the audience who have lost someone are laughing the loudest. Because losing someone can be very sad, but people who've experienced it know you might also feel anger, relief, fatigue, fear, anxiety and countless other emotions in a given day.

And I can't stress enough how much paperwork is involved. I don't find it funny that my parents are dead, but the mountain of admin work left at my feet? That's hilarious. Especially after the way I treated them as a teenager.

When my dad died in 2008, I was relieved that he'd taken the time to figure out the logistics of his funeral arrangements and finances. He'd been sick for nearly two years, so we'd had plenty of time to process and plan.

But eight years later, when my mom died much more suddenly, none of the logistics was in place. I found myself petitioning a surrogate's court to handle her final financial obligations; planning an estate sale, which I knew nothing about then but have very strong opinions on now; packing up and selling my childhood home; inevitably arguing with my siblings about how and when to handle all of the above; and deciding which of the roughly 34 nearby Italian restaurants would host the funeral after-party.

Comedy had been the lens through which I saw everything, so why not grief? tweet this

Those are just some of what I like to call the "death errands." Did you want to hop on a call with a gas company and a bank and the county tax assessor all in the same day? I hope so, because that's what you'll be doing! And no, they don't accept your loved one's expired Kohl's Cash at the cemetery. I checked.

I used my vacation time to make countless trips to New York City suburbs from Vermont to handle the estate stuff. At night, I got onstage. I joked about how it bummed people out to hear about my life as a gluten-free orphan. Sure, I miss family Christmases, but I also miss the Christmas cookies. I did a long bit on how competitive the grief community can be.

In the process, the Orphan Annie persona became my "thing." Yeah, I'm an orphan named Annie. The jokes write themselves. Need some dark material on your show? I'm available! Comedy had been the lens through which I saw everything, so why not grief? I worked through the stages of loss in real time, into a microphone.

I soon learned that the audience wanted to talk, too. They'd open up to me about their experiences after shows, because my talking about it onstage gave them permission. Comedy can be therapeutic, but I should emphasize that I also went to actual therapy. I should. You should. We all should.

Once, I was booked to do standup at a benefit comedy show for a local guy who'd been diagnosed with cancer. We were meant to raise money for his medical care, but he died before the event could take place. His family wanted to do the show anyway. Suddenly, we were seeking donations for funeral expenses and trying to give his community a small reprieve from grieving, which in my experience involves a lot of sitting around the house. They wanted a night out, so we were going to deliver one.

The comedy show-turned-memorial started with a slideshow of the deceased's family photos set to music. It was the type of thing you'd expect to see at a funeral, but in the back of a bar in St. Albans it was kicking off a standup show. Following something like that is typically a comedian's nightmare. We talk about performing for a "cold room" when a crowd isn't ready to laugh, but this audience was quite literally crying. The first performer took the stage, visibly shaky and uncomfortable.

And the first few minutes were rough. I remember watching from the back of the room, dreading my set. Was this all a horrible idea? Were we making an already painful situation even worse?

But I also recall how it felt when, just a few minutes later, everyone saw the humor in coming together for a celebration of life/standup night. A comedian riffed on how the slideshow probably should have been played at the end of the show. Suddenly everybody was laughing.

When I got up to do my set, I did all the grief material I had. The audience was laughing, sure, but I also saw appreciation in their eyes. We had all experienced something similar, something most people don't like to talk about, and we were daring to put it all out in the open. I was particularly moved talking to the deceased's teen sons after the show. I told them it gets better, sort of.

Lately I find that I'm starting to move past the orphan material. Sure, if I have a longer set I'll bring out the old jokes because I know they work. But grief doesn't creep in when I write these days, this essay notwithstanding. Generally, other thoughts and feelings have moved into that space.

Still, once in a while I'll cry unexpectedly during a cheesy father-daughter dance at someone's wedding. But then, just as quickly, I'll laugh. My dad would have hated this song.

The original print version of this article was headlined "Orphan Annie"