Essay: Natalie Miller Riffs on How Her Nightclub Survived the Pandemic 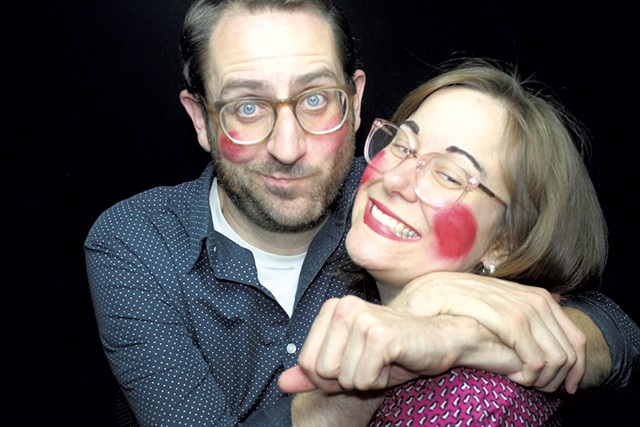 Del Close, one of the founders of modern improvisational comedy, once said performing improv is "like building a 747 in mid-flight." As an improviser myself, I can attest that the art form requires an almost delusional sense of faith that, if we all work together onstage, we'll be able to create a transcendent, funny, unscripted comedy show that soars rather than crashes headlong into the sea.

Running Vermont Comedy Club for the past seven years has often felt this way, too. No day at a performing arts venue ever goes exactly to plan; no event goes completely smoothly. Creative problem solving is a constant necessity if you want to keep the damned thing aloft.

In March 2020, the 747 my partner, Nathan Hartswick, and I were building in midair burst into flames. Its passengers were awash in jet fuel, their hair on fire — half of them screaming that we were all going to die, the other half insisting the impending crash was a lie made up by liberal cucks in order to plant 5G chips in their brains.

There's really no playbook for "sudden pandemic closure" in the venue management handbook. (Come to think of it, I don't think there's even a venue management handbook.) Throw almost anything else at me, and I can roll with it: A famous performer cancels at the last minute? I know how to handle that. AC stops working on a 90-degree day? Easy. All the restrooms flood on Halloween? Kids' stuff.

But when a global pandemic hits, and your model relies on packing strangers into an enclosed space — with the goal of inspiring them to forcefully expel air from their faces by laughing, no less — you're kinda fucked. During the COVID-19 pandemic, performing arts venues all over the country were the first businesses to close, and they have been the last to reopen. (If they even reopened.)

When a crisis happens, I tend to focus on everyone else's needs first. I know, you're supposed to put on your own oxygen mask and then tend to others. But that's not how I'm wired. Overnight, there were 25 employees I had laid off and more than 100 local comedians who couldn't do comedy anymore. I set about checking in on them all and pivoted to producing online shows and open mics, raising funds for staff, and applying for grants and loans to keep our business afloat.

But that's what you do in a crisis, right? What would you have suggested? That I deal with my own emotions? Honestly, yuck. Why do you think my business grew so quickly after it launched in 2015? Because I'm a model of emotional stability with a healthy work/life balance? Of course not. I focused on the business, our staff and our customers, and I pushed down my own personal feelings of panic, depression and dread.

I focused on the business, and I pushed down my own personal feelings of panic, depression and dread. tweet this

(Speaking of sacrificing yourself for your art, fun fact: Before he died in 1999, Del Close bequeathed his skull to the Goodman Theatre in Chicago, to be used in its productions of Hamlet. Now that's commitment.)

As the pandemic lockdown continued, it became more difficult to ignore my own bullshit. I had been working in an unsustainable way (shocker!), and I was fully burned out. My whole life, identity and marriage had been consumed by the comedy club. My biggest fear wasn't so much financial ruin — not anymore, anyway, since that seemed all but inevitable — it was having to sit in the quiet of my own mind and come up with an honest answer to the question: Without this business, who even am I?

Like a lot of people asking that question in 2020, I found that the answer was: "Certainly not a professional baker of bread." Turns out I'm pretty good at baking cookies, though. And I'm terrific at watching "The Great British Baking Show" while eating desserts I bought at the store.

Months passed. (You remember. It took decades.) So much happened: Black Lives Matter, a presidential election, an attempted coup, GameStop. Collectively, we all started focusing more on our personal health and happiness. YOLO. (You only live once.) YCDAD. (You could die any day.) YLIACH. (You're living in a capitalist hellscape.) A spotlight was put on inequities and a broken system. We had extra time to ask ourselves what we wanted to do differently in our lives — and in our businesses, if we actually reopened them someday.

And, yes, Nathan and I did consider letting ours go entirely. Some other venue owners took the out, and who could blame them? It's a hard gig; strapping on the parachute and aiming for someplace safer and more stable was a pretty attractive proposition.

Instead, we focused on what brings us joy in running our comedy club and made changes to the business model — some designed to bring in more profits, others designed to create a better work/life balance for us and our employees. We were extremely fortunate to even get the support required to survive 2020 and reopen the club (exactly one year ago, in fact). Without a federal COVID-19 Economic Injury Disaster Loan and a Shuttered Venue Operators Grant, we would have gone the way of the dodo.

A lot of lovely people have told me how happy they are that we "made it through the pandemic." Obviously, it is a good thing. But there's a misconception that because we were able to reopen, our troubles are now over. To be honest, things haven't gotten a whole lot easier. Last winter, Omicron tanked what would have been our busiest time of year. Customer habits are drastically different and less predictable, making scheduling tricky. Expenses stay the same while revenues fluctuate wildly. I still can't bake a decent loaf of bread (not that I have the time to try anymore).

And the trolls! Oh, the trolls. Angry red hats harassing us with voicemails and negative reviews saying, "You require vaccine proof? I guess you don't want money, then."

Solid point, Bryce. Let's run the numbers on me having to cancel a week of shows when my whole staff tests positive for COVID-19. Let's see how that looks on the ol' profit-and-loss sheet. Hard eye roll.

Of course, there are good, exciting things, too. Requiring vaccine proof may have inadvertently created a personality test for audiences — our rate of having to kick people out of shows for disruptive behavior has dropped to almost zero. We've added some cool new things to the business, like a daytime café, event rentals and a membership program for fans. We've really prioritized taking care of our employees, and our staff has never been better. Our local comedy community is rebuilding nicely after losing a lot of good talent to major cities in 2020.

So I guess the plane we're flying, it turns out, is more airworthy than we thought. The most critical fires have been put out. Unruly customers have been duct-taped to their seats. The pilot is cracking jokes, and the attendants are bringing around the biscotti and tiny wine bottles. And I just keep at it: patching the holes in the plane, taking hits of O2 to keep myself alert, building the 747 in mid-flight, once in a while taking a peek out the window to appreciate the fact that we are, amazingly, still flying.

Natalie Miller is a comedian and co-owner of the Vermont Comedy Club. Learn more at vermontcomedyclub.com.

The original print version of this article was headlined "Winging It | Essay: A Burlington nightclub owner riffs on how her business survived the pandemic"