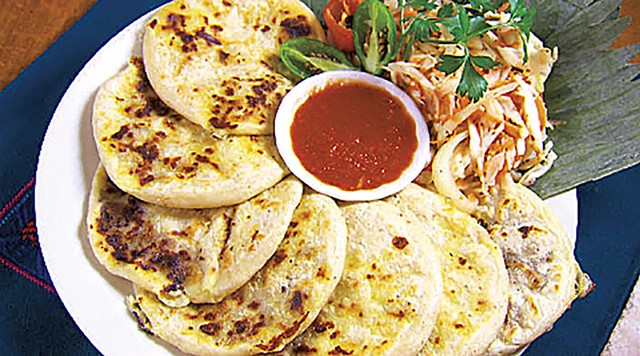 What do crispy Filipino egg rolls and Salvadoran pasteles have in common? They'll both be on the menu at Esperanza Restaurante when it opens at 180 Battery Street in Burlington this December.

To the casual observer, the two cuisines may seem to be unlikely bedfellows. But both nations were annexed by the Spanish empire in the early 1520s and lived under Iberian rule, in one form or another, for most of 400 years.

"Filipino and Salvadoran food use a lot of the same ingredients," says Esperanza co-owner and chef Gerber Rodriguez. Rodriguez is no stranger to the Battery Street space: For years he ran the kitchen at Madera's Restaurante, its former occupant. More recently, he cooked at the Windjammer Restaurant, then took over the Madera's space after that restaurant closed in September. Cynthia Nabalitan, Rodriguez's partner in life and business, will lead the front of the house and help him bring the flavors of her native Philippines to the Esperanza menu.

That menu will incorporate casual fare from both countries. From El Salvador will come pupusas — griddled-corn pancakes stuffed with cheese, stewed vegetables or meats — and pasteles, which are similar to empanadas and filled with meats or potatoes. Pan con pollo hoagie sandwiches will cradle saucy chicken.

Filipino plates will include crispy fried chicken lollipops and adobo — not the dark and spicy Mexican sauce but a tangy Pacific island stew made with marinated beef, chicken or pork and veggies, then served with rice. Rodriguez also plans to offer tuna kinilaw, a raw dish made with diced cucumbers and onions, similar to ceviche.

The chef will revive a few Mexican favorites from the Madera's menu, too. "We're going to please the people who would come here before," he says. Some Mexican dishes will be available side-by-side with Salvadoran dishes by the same name, so customers can sample both. Salvadoran enchiladas, for instance, are built by layering meats and veggies on a crunchy fried tortilla; the tamales are somewhat larger than Mexican ones and wrapped in banana leaves instead of corn husks.

In Spanish, esperanza means hope, and Rodriguez and Nabalitan are hoping Vermonters will embrace the new flavors they're bringing to the table. "We're trying to tap into some new types of food," Rodriguez says. "There's no [purely] Salvadoran or Filipino food here."

If all goes according to plan, Esperanza will open on December 1 for lunch and dinner, Tuesday though Saturday.

The original print version of this article was headlined "Hopey-Changey"