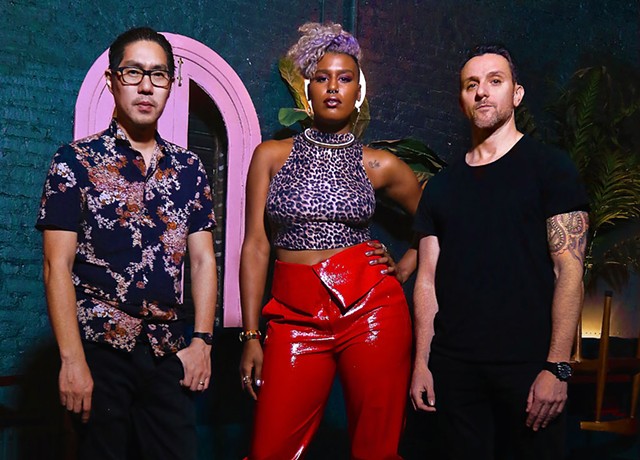 Disco ain't dead. Just ask Eugene Cho, cofounder of New York City ensemble Escort. The group, which at one point boasted a roster of more than a dozen players, conjures a glamorous, elegant take on one of the most divisive dance-floor genres. Escort's version of disco recalls tunes from the genre's late-'70s and early-'80s heyday: vocally driven and festooned with arpeggiated synths, slinky guitar riffs and a torrent of driving beats. Yet Escort's music doesn't feel dated. It mixes in seamlessly with other contemporary dance outfits such as La Roux, Jungle and Classixx.

Seven Days caught up with Cho by phone.

SEVEN DAYS: Escort's live lineup fluctuates. What will the band look like on Friday?

EUGENE CHO: [We've] evolved over the years. The idea of the full lineup has morphed quite a bit. Right now we're touring generally as a four-piece band. But for this show we're gonna have five of us out there. Every once and a while we'll have a horn section.

It's tough to have a huge, big band and make a living. I was talking to my friend in Antibalas who has the same conundrum. We were both talking about how most of our money goes to the airline industry.

SD: How does the changing roster affect the music? Do you feel like you sacrifice something by scaling down?

EC: When there's less people, there's a lot more immediacy with everything that we play. When we dig in and the guitar kind of plays a little bit more rhythm and stuff, there's room for improvisation and for people to make a big impact just by changing things a little bit. When we were a larger group, you kind of had to play your part. And if you didn't, you could mess up things for everyone else. So there's a little bit more freedom with fewer people.

SD: There aren't many currently active, authentic-sounding live disco bands playing original music — other than Escort and Midnight Magic. What is it like to be dancing on your own? Do you feel like a fish out of water, or like you're swimming upstream?

EC: It's tricky, because we started getting into the vocals driving a lot of the music, which is, for DJ and club music, not usually the case. When we played Movement [Electronic Music Festival] in Detroit, we came up there with some live drums and live instruments, and people really appreciate that and got into it in a way that they weren't used to everywhere else in the festival.

We also get to have an audience [of] people who are into indie music and even just straight-up rock fans that just like going to shows, which is a big part of what we like to do. We like to go to shows and see things live and presented in that way. It comes with challenges and rewards.

SD: After Adeline left the band, how did you go about finding a new voice?

EC: I mean, it wasn't the best news for us that we had to change things so dramatically. But Nicki's such a big and great presence. And she's been playing with Crush Club and singing a lot with them, first in a more backup role. But she quickly became a big part of [their] stage show.

SD: What are some qualities that Nicki brings to Escort?

EC: She's naturally talkative and [has a] big, shining outward presence. She has no inhibition onstage. It'll be very obvious that she just likes to go out there and have fun and give a ton of energy. She comes off the stage sweating and knowing that she gave everything every time. She just gets really excited and pumped up for everything.

SD: I imagine City Life might be the start of a new era. Does that come through in the music?

EC: It's coming from the same place we have been in the past. Obviously it's new music, new songs. We're just coming with more experience, bigger production and more mature lyrics. We have expanded — especially because of Adeline's departure — to a lot more voices. You'll hear Nicki singing lead on a couple tracks. We have a few guest appearances, too. Nothing against what [Adeline] has done in the past, but it was interesting to have more voices and personalities on the record, [such as] Fonda Rae.

We played a tribute show for Patrick Adams at the Red Bull Music Academy, and [Fonda Rae] was one of the singers. She just slayed it. Everyone went crazy. I talked to her, and she was super nice. One of the first things she said was, "I just wanna be in the band. I just wanna hang with the guys and do my thing. I'm not a diva." And it really stuck with me. I started writing ["City Life"] the next day. It took about a year before I approached her with it. And I was very nervous. The whole concept was for her to deliver, and I would've been crushed if she didn't do it. But she was totally into it from the beginning.

SD: Can you clear something up for me that's been bugging me for, like, seven years? "Cameléon Chameleon," the opening track on your debut — what the hell is that song about? I know all the words, yet I feel like I don't truly understand it.

EC: It's about this guy in France that conned his way to stay in foster care for years — into his twenties. He dressed up like a kid and acted like a kid. It got to this huge lie where he ended up being investigated. And then he went even bigger.

He found a family in the U.S. that had lost a child years ago, and he pretended to be that child. He flew over to the U.S., and they accepted him as their son. There was a whole press event when he arrived. It gets crazier from there. I don't remember all of the details. But it was pretty shady that [the family accepted him]. The lost son's brother eventually was like, "Why are you doing this to us?" But they couldn't let up. I think it's because the son wasn't lost — he was murdered.

SD: Wow. That is nuts. I always thought there was an air of truth to that song.

EC: It's too crazy to make up.

The original print version of this article was headlined "Night Work"